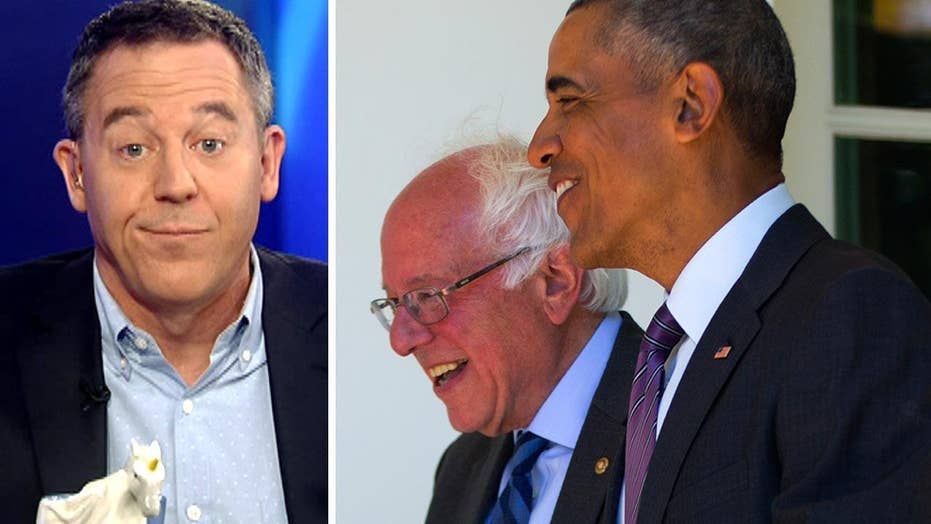 Gutfeld: A socialist in the White House

Bernie Sanders visited the president today. Great, a socialist was in the White House; Sanders, too.

Yeah, you could see that joke coming like a Frisbee over a salt flat, but you could you also see Venezuela coming, too. Yet these fiscal flunkies didn't, preferring to put blindfolds on the present to prevent seeing the past, where socialism brought more pain to earth than jaundice, Jihadism and Justin Bieber combined.

Did socialism cause Venezuela's hell? Of course, but Sanders or Obama couldn't connect two dots if you spotted them the dots and the pencil.

So how did it go with Bernie and Barack? Do you think Bernie brought his own bag lunch with a wet spot from the tuna fish? And afterwards, did he ask Ms. Jarrett to validate his parking?

Meanwhile, Hillary's negative are so high that when you read them your eyeballs get nosebleeds. She's got the appeal of chicken pox with the looming promise of shingles. If you ran an actual landslide against her, it would win in a landslide.

SCOTT PELLEY, "CBS EVENING NEWS" HOST: Fifty-two percent of the American people who participated in our CBS news poll have an unfavorable opinion of you. Do you bear any responsibility for that?

HILLARY CLINTON, D-PRESUMPTIVE PRESIDENTIAL NOMINEE: Oh, I'm sure I do, but I think -- when I was secretary of state and serving our country, I had an approval rating of 66 percent, and I think it's fair to ask, well, what's happened? And what's happened is tens of millions of dollars of negative advertising and coverage that has been sent my way.

Did you see his glasses disappear? That was amazing.

Anyway, Hillary now claims for certain that she won't be indicted. How does she know? Did she hack the FBI's personal server?

Still, Obama just endorsed her. I wonder if he knows how hard this job can be.

PRESIDENT BARACK OBAMA: I know how hard this job can be. That's why I know Hillary will be so good at it.

So, will his endorsement help? Who knows. For all the criticism about being corrupt, Hillary's got one thing going for her: Trump.