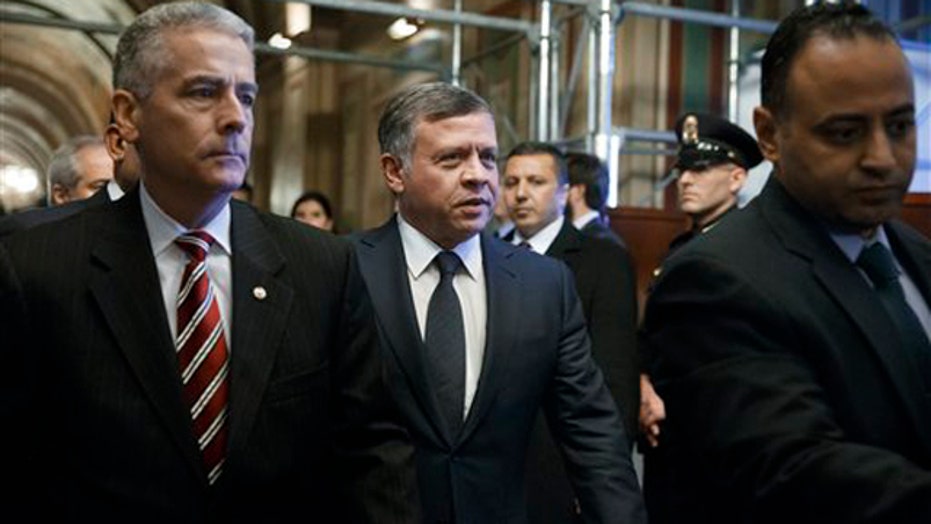 Growing calls for US to give more aid to Mideast allies

CALLS GROWING FOR U.S. TO GIVE MORE AID TO MIDEAST ALLIES AS ISIS THREAT MOUNTS

MIKE OZANIAN: We need to completely annihilate ISIS; we need to do it through diplomacy and building up a big coalition in the Middle East. $400 Million more for Jordan is not going to get it done.

ELIZABETH MACDONALD: That's a turning point. Right now the fight is at a turning point. Give Jordan what it needs, Jordan needs- I don't think boots on the ground just yet. Even the senate armed service is saying that, too. What we had now is a president who's ambivalent and he's in teacher faculty lounge outlook. We need an FDR or Reagan. Last decade the turning point came against Zarkari, who ran Al-Qaeda in Iraq. His own jihadi turned against him when he engaged in brutal slaughter.

RICK UNGAR: We should be sending this aid. The hard part in that part of the world is often determining who's really an ally and who isn't. Qatar, great example, but I'll tell you what, I'm going to go the step further, the United States functions best when we stand up against evil. ISIL is evil, we need to go there and kick their you know what.

RICH KARLGAARD: What we really need is for the president to channel his inner Winston Churchill but, oh, wait, Barack Obama took down Churchill's portrait almost immediately upon taking the white house in 2009.

RICH KARLGAARD: What this did was stimulate both employers and potential employees to go out and hustle it was a good thing.

RICK UNGAR: Clearly they were wrong in terms of what they said. But if you look at the studies that came out a year ago, it was going to be as the President said. Things took a good turn, I'm not buying it's because we cut unemployment benefits I think the economy got better.

JOHN TAMNY: Incentives matter. If you are getting a check from the federal government there is less urgency to go out and find work. With the reduction of benefits, more people are likely to go out there and seek work. That in itself has stimulated economic growth.

SABRINA SCHAEFFER: It is good policy; it gets to the core of the ideological differences between the left and the right. The President and the left think you can hand out freebies to the American people and that is going to lift them out of poverty; the conservative camp say look there are things that government can do to make our lives easier, but the so called free handouts come with serious economic consequences.

STEVE FORBES: The jobs that have been created were low paying jobs.

ELIZABATH MACDONALD: Long term jobless benefits- we all want to help people- it's not a long term economic policy.

STEVE FORBES: What is there to protect? The internet has been a fantastic engine of growth and innovation. This government regulation will turn a vibrant river into a stagnant swampy backwater. There will be less innovation.

RICK UNGAR: I am afraid that is the government doesn't do it, all of these great innovators and entrepreneurs that we have been experiencing will not be able to do so.

RICH KARLGAARD: What on earth was broken about this? What evidence is there that this is any way hurting entrepreneurship in America

MIKE OZANIAN: The big carriers will be fine, the small ones will be squashed.