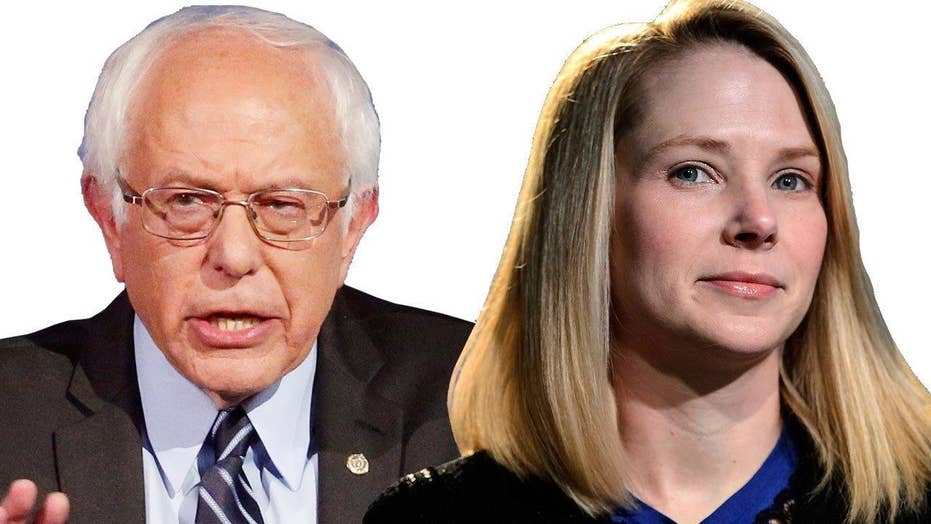 Greta: Sanders got a poster child for corporate greed

Greta's 'Off the Record' comment to 'On the Record' viewers: Marissa Mayer of Yahoo! is about to get fired and get a $55 million golden parachute. But what about the CEOS who work hard and give back to their communities, Sen. Sanders?

Let's all go "Off the Record." Senator Bernie Sanders just got his pin-up girl, his poster child, for corporate glut - Marissa Mayer, CEO of Yahoo!. Rumors are she is about to get the boot. Don't worry she won't have to stand in line at Kinkos, printing a batch of resumes. That is because the Yahoo! severance package sure is a meaty one - $55 million.

Yes, $55 million for failing and getting the boot. I bet you would have been willing to get fired for a whole lot less than that. I know I would have, which brings me to the real culprits, the board of directors at Yahoo!. What were they thinking? While the teachers and firemen and others across the country are watching their life savings invested in Yahoo! drop, the board of directors is lavishly spending it for failure. She is not getting fired for success. Go figure.

So, okay, Bernie, I will give you this one. But here's the truth: There are millions and millions of rich people Bernie won't talk about. The ones who made their money the hard way - earning it for success and working constantly, giving back, doing good works and charity. Bernie, when are you going to start talking about them?

P.S. - and I add, tongue in cheek: No equal pay for women at Yahoo!. Get this: In 2014 Yahoo! fired a male executive, Henrique De Castro. After just 50 months on the job, he got a whopping $58 million. Now that is $3 million more than Mayer's getting and she is the CEO; he was not. She has been there nearly for four years. How about that? A golden parachute pay gap.