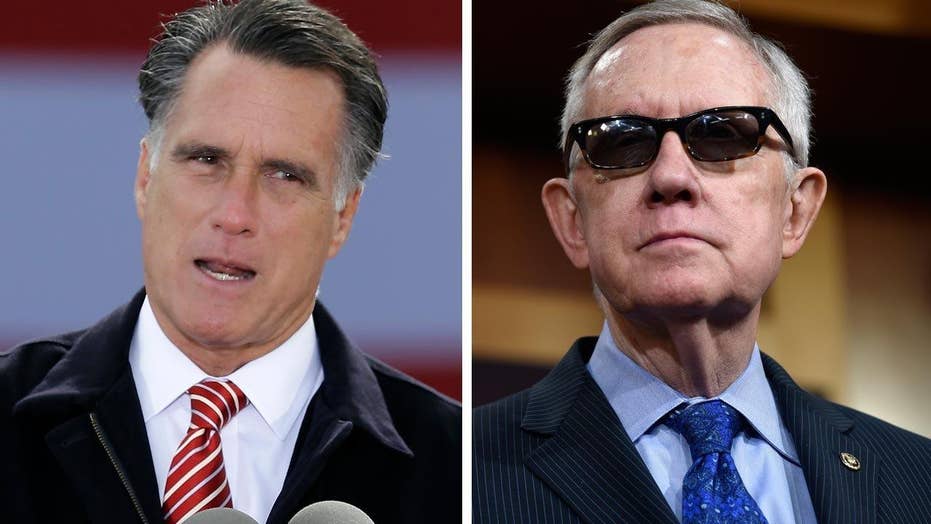 Greta's 'Off the Record' comment to 'On the Record' viewers: Mitt Romney doesn't know what's in Donald Trump's tax records. But through innuendo, he did to 'The Donald' what Harry Reid did to him in 2012 - and that's disappointing

Let's all go "Off the Record." Remember how dirty Senator Harry Reid was in 2012, making accusations about Governor Romney and his taxes?

That's so dirty, and Reid did it to smear Romney. He didn't know what was in Romney's taxes. He just wanted to smear him with innuendo. I thought Reid was disgraceful for using the Senate floor that way, And I smacked him for it. And I also smacked House Minority Leader Nancy Pelosi, too. She was up to her eyeballs in it with Reid.

It's one thing to name names, so it can be investigated to see if it's true. It is another thing to just stir up gossip and rumor by throwing around explosive and poisonous allegations. That's just dirty, which brings me to now, four years later:

MITT ROMNEY, FORMER GOP PRESIDENTIAL CANDIDATE: Frankly, I think we have good reason to believe that there is a bombshell in Donald Trump's taxes.

NEIL CAVUTO, 'YOUR WORLD' HOST: What do you mean?

ROMNEY: Well, I think there is something there. Either he is not anywhere near as wealthy as he says he is or he hasn't been paying the kind of taxes we would expect him to pay or perhaps he hasn't been giving money to the vets or to the disabled like he has been telling us he has been doing.

So now it's Governor Romney with the innuendos. You would think after Reid did it to him that he would be the last person to stoop that low. And Romney knows that's a low blow.

And just like Reid, Romney doesn't know what's in or not in Trump's tax returns. It's just a cheap shot. I always admired Romney, but tonight, I'm disappointed in him.

I'm not telling you to vote for or against Trump, that's your business. And yes, of course, Trump and all the candidates well, they should release their tax returns, but not at the end of a smeared gun.