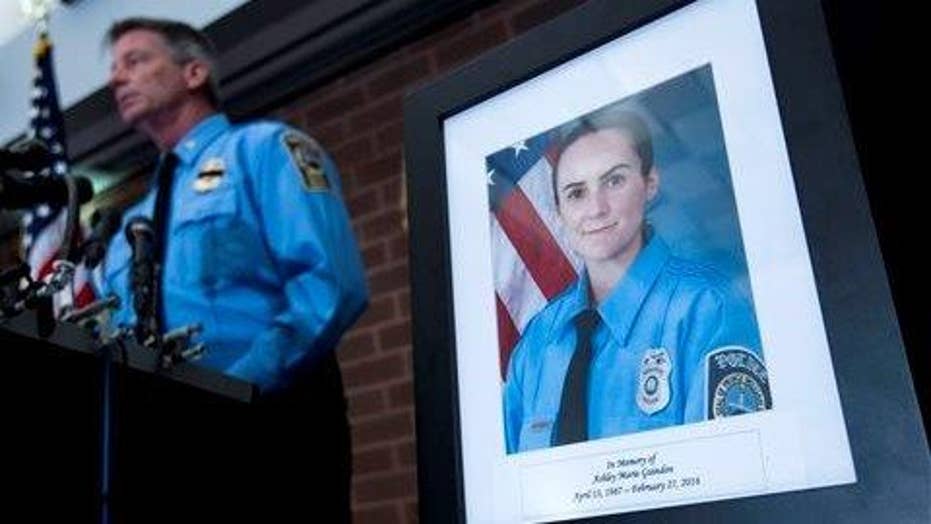 Greta's 'Off the Record' comment to 'On the Record' viewers: The tragic shooting death of rookie police officer Ashley Guindon is a reminder that our brave men and women in law enforcement put their lives on the line every single day

Let's all go "Off the Record." Look closely. That is Ashley Guindon. In 2011, she interned at the Prince William County Police Department in Virginia. She also worked as a Marine Corps reservist for six years. She obviously wanted to serve, and thank you to her for doing that.

But this past Friday, she was sworn into active duty as a member of the Prince William County Police Department. Check out the picture. The department proudly posted it on its Twitter page. After swearing in, I bet she felt enormous pride just putting on that uniform for the first time.

The next day, Saturday, she was on the street patrolling for the first time. Officer Guindon was shot and killed. She responded to a domestic disturbance. Two of her fellow officers were also shot and injured.

Tonight, words are simply inadequate, but I am asking you for a favor. For all law enforcement, coast to coast, share Officer Guindon's story. Tell your friends and family about her. It will remind everyone of the daily risks and sacrifices of all our brave men and women in uniform. They put their lives on the line to protect us.

Officer Guindon, like so many others, made that ultimate sacrifice. Her name will now be etched on the National Law Enforcement Officer's Memorial with more than 20,000 other fallen officers. And that's my "Off the Record" comment tonight.