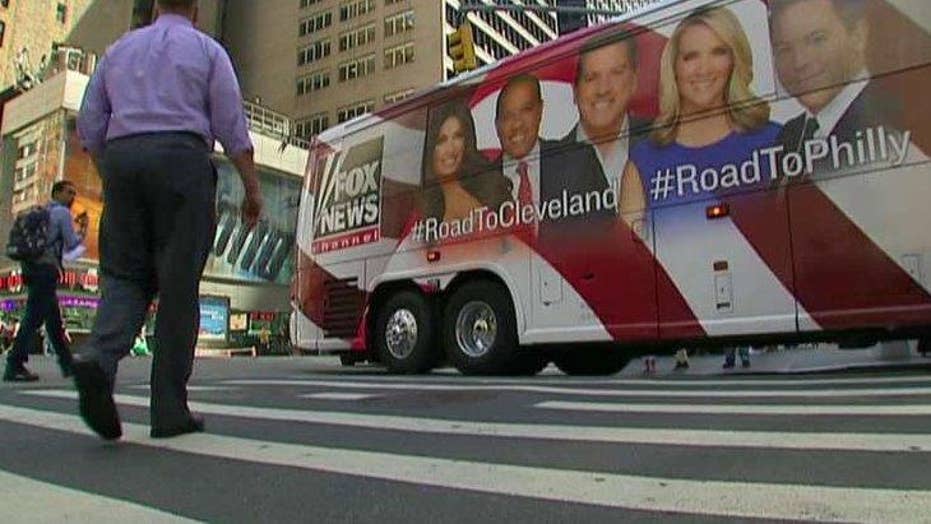 Can 'The Five' make it to Cleveland without killing each other?

Our bus trip is just days away, which means it's time for some road trip rules.

Now road trips are all about forced proximity, respecting one's space. It's not about bonding; bonding is for teenagers at camp. Here, it's just about making it to the convention in Ohio, without killing each other.

So number one: No number two on the bus. It is not a Starbucks bathroom in Barnes & Noble, it's a bus.

Number two: No sing-a-longs. There's no point to 100 bottles of beer on the wall. Can we please let this evil die with us? It's as bad as children playing Marco Polo.

Number three: Don't keep asking truck drivers to honk their horns. Do truckers come to your home and ask you to ring your doorbell?

Four: Don't open the window to pretend to play hand airplane. We know you're breaking another kind of wind.

Number five: If you can't see it from the freeway, it doesn't exist. Stick to visible drive-thrus. By the way, no one eats fish on the bus. That's like playing death metal in church.

Number six: Are you always the last person to get on the bus at every stop? Don't be the person everyone is waiting for, Kimberly.

No illicit drugs. The other passengers shouldn't have to endure a cavity search, because you couldn't go without a buzz for a week, Juan.

Number eight: Always do roll call when you're leaving a truck stop. That's where most people disappear according to my Uncle Steve who's been on "Forensic Files" eight times.

Nine: Stay on the main roads. Remember one word : Deliverance.

Ten: Have a safe house along the way. You may need to park somewhere private to scrub evidence off the grill.

And finally: No arguing about politics or religion. And most of all: No mooning school busses, Eric.