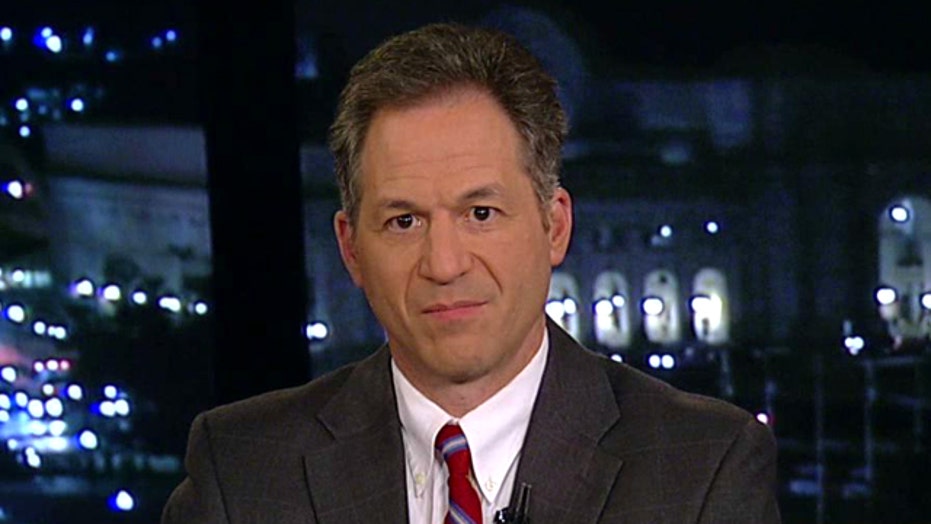 This is a rush transcript from "Special Report," December 1, 2011. This copy may not be in its final form and may be updated.

PRESIDENT BARACK OBAMA: The road ahead will be long. Our climb will be steep. We may not get there in one year or even in one term.

If I don't have this done in three years, then there's going to be a one-term proposition.

BRET BAIER, ANCHOR: The president on election night in 2009 and then last night at a fundraiser talking about a second term and turning the economy around.

He also said this not on camera about Israel, quote, "I try not to pat myself too much on the back, but this administration has done more in terms of the security of the state of Israel than any previous administration. And that is not just our opinion. That is the opinion of the Israeli government."

We're back with the panel. Charles, is that the opinion of the Israeli government?

CHARLES KRAUTHAMMER, SYNDICATED COLUMNIST: It is not, and I'm sure Obama knows it. If he doesn't, he's delusional. And this is really chutzpah. This president has done more to delegitimize and undermine Israel's position in the world than any other president, and he did it by arriving on the scene and imposing and demanding of Israel a freeze on settlements, including the building of Jewish homes in the Jewish quarter of Jerusalem of all places, something that had never been a precondition in 17 years of negotiations.

Imposing, and of course the Palestinians had to insist on it as well once the president had, and that destroyed all negotiations, and it made Israel the fall guy for an era, an era of an arrogant amateur who imposed this at the beginning of his term. As a result there are no negotiations.

And second, the most important issue for Israel, for its security is Iran. And this is a president who at a time of maximum weakness of the Mullahs in 2009 did not lift a finger to help the revolution because he had another delusion that if he engaged and negotiated with the Mullahs he could sweet talk Iran out of its weapons. The policy is a failure. He knows it. And we are on the threshold of Iran becoming a nuclear power.

BAIER: Chuck, many analysts not just at this table but other places, have talked about a vulnerability when it comes to Israel. You saw the congressional district, the ninth congressional district race in New York which turned many people believed on the issue of Israel. This was kind of a bold statement, even to say at a Democratic fundraiser wasn't it?

CHARLES LANE, EDITORIAL WRITER, WASHINGTON POST: Well, I thought it was kind of a tall claim. I'm perhaps not as hard over about this as Charles is. But I was trying to think back of what previous administrations had done for Israel's security. And I guess my winner for the one who had done the most of any would be good old Richard Nixon who in 1973, together with Henry Kissinger secretary of state decided to ship weapons to Israel when it had his back against the wall in the Yom Kippur War. Now, that is doing something for Israel's security. And I'm not sure anything is that critical in the last three years to measure up to it.

BAIER: Along those same lines there was a hearing today on Capitol Hill about Iran and sanctions, specifically on the central bank there and whether there were going to be increased sanctions on Iran. Democrats including Senator Menendez spoke out against the administration. Take a listen.

SEN. ROBERT MENENDEZ, D-N.J.: The clock is ticking. The published reports say we have about a year. Now when are we going to start our sanctions robustly? Six months before the clock has been achieved, before they get a nuclear weapon? We shouldn't leading from behind. We should be leading forward.

BAIER: That is Democratic Senator Menendez from New Jersey.

And what Menendez is saying is they are no longer there. They don't want to impose these sanctions and they are actively working against it. He is upset about it. And I think he's right in part because of the effects that it will have on Israel. The sanctions -- I would say the sanctions put in place at beginning of the Obama administration worked better than some of us skeptics thought they would. But in fact they have -- Iran is still racing towards a nuclear weapon.

BAIER: The concern apparently from the administration is that that particular move would have some kind of implication on our economy. But this hearing seemed to vet out that both sides of the aisle are saying we need to move forward on the sanction.

KRAUTHAMMER: Everything is going to have a price. It is true that if we impose as the Europeans or some suggest an embargo on Iranian oil you might get an increase in the oil price. But think how the cost will pale compared to the cost of what is inevitably going to happen if nothing is done, which is an Israeli airstrike, which would cause the outbreak of a regional war, which could cause the closing of the Straits of Hormuz, which would cause a doubling of prices. Diplomacy is managing what the options are in the real world.

And to not take the available steps to sanction Iran and to weaken it to the point where it really is extremely weak -- any regime rounding up the spies as Iran has done in weeks is regime under pressure -- to not do that because afraid you might have a spike of oil price is unbelievably irresponsible and short-sighted. By doing nothing we are asking for, inviting much more dire consequences on the region and on the world and American economy.

BAIER: Chuck, to circle around to what we ran at the beginning on the economy and President Obama's statements on election night and then 2009 and then last night, is there a vulnerability there in what he said on the campaign trail on election night, and then the whole if I don't get it done in three years, a one-term proposition?

LANE: Well, there's a vulnerability to the extent, Bret, that he, himself, said early on that the standard you have to judge me by is jobs. Will the jobs picture be better four years hence? That is going to be a hard case for him to make. And in addition to that, all the stuff about change is pretty much going to be all about preventing the rollback by the Republicans in a second term as opposed to actually advancing a progressive agenda because the Republicans are likely going to continue to control the House.

BAIER: That is it for the panel, but stay tuned for a blunt admission about commitment.