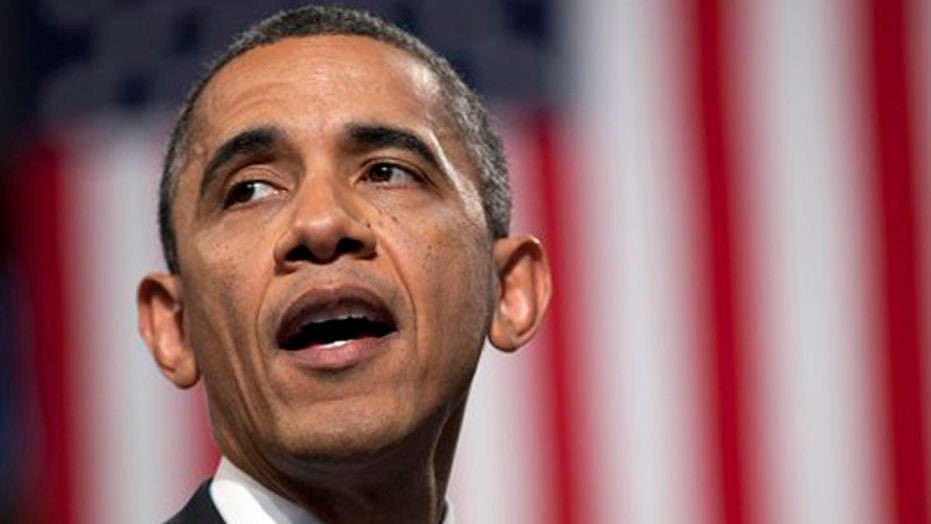 U.S DEBT IN FOCUS AS DC FIGHTS OVER $85 BILLION IN SPENDING CUTS

JOHN LAYFIELD: Look, when you have no facts you use emotions and fear. Oh, my god, children are going to starve to death in our streets and air traffic is going to be shut down completely. That's when you don't have facts. Both sides are doing this and both sides are refusing to cut. Look, according to President Obama's own budget, we're going to run trillion dollar deficits 10 years from now. Ten years and we're still spending about $48 trillion. Over the next 10 years, we're trying to cut $1 trillion. Instead of borrowing $0.40 cents of every dollar we're asking our government to borrow only $0.38 cents for every dollar. Instead of spending $3.8 trillion we're asking to spend only $3.7 trillion. If a company can't cut 2 percent, not much less the entire 40 percent that we're borrowing, something's wrong. This is fear mongering at its worst.

JEHMU GREENE: We absolutely have reason to be afraid, Brenda. How do you spell bad news for the economy? S-e-q-u... You get the point, sequester. When you think about the scare factor here, yes it's not as bad as if this happened at the New Year when we were looking at the fiscal cliff, but is there really a difference between the exorcist and the shining? The fear is there. Of course we need cuts, you need it in stages. You don't do it when the economy is fragile. You do it when the recovery is stronger. These across the board cuts are bad news.

TOBIN SMITH: Obviously, the economy is scared of something else and they're scared of it turning to $26 trillion in a $15 trillion economy. In other words, we would in fact be Greece. The $85 billion, of course, doesn't account for the $50 or $60 billion that we're getting in Sandy relief. The government spends $4 billion a day and this is actually, maybe ten days of total spending all in. No, it's not a big deal, its total semantics.

GARY B. SMITH: Absolutely not. We should be hitting the panic button if we do nothing. There are a few head scratchers here. I know that Jehmu is worried about this, but look around. Is there any agency out there in the government that can't say, "You know what? We're working to the bone, we're working, 100 percent and no one has any free time. No one takes a walk out to have a cigarette. They're never on the internet for anything else." My gosh, 2 percent, waste fraud. My gosh, there is probably ten times out in every agency from the F.D.A. to the Department of Commerce to some useless agencies like the Department of Education. The other thing we saw in the clip that President Obama had the first responders, the firefighters and oh, my gosh, they're all going to vanish. Well, I have a question, why is firefighters, why is that a federal function? We're paying for firefighters through our tax money in Arizona and Pennsylvania. That's all local unless you think that's small dollars. That's $310 million we file to the government to spend on localities.

JONAS MAX FERRIS: Look, there are two problems here. First of all, I don't see what the urgency is to pay off the debt for the next couple of years while the economy is slow, because right now the government borrows at a negative interest rate. Their debt gets cheaper to pay off because of inflation every year. That won't be forever, but that's the case. A longer spending problem needs to be addressed. By doing the sequester we think we've solved the spending problem which we're not in the ballpark solving. We're better off doing no cuts for year and major ones are going to kick in over the next 20 years to really balance the budget and that's the big problem we're not going to address.

GARY B. SMITH: Well, you know, I think that everyone watching out there is concerned unless their last name is it maybe Buffet or Gates. This is not a temporary blip. We just saw the warning from Wal-Mart. We've seen concerns from burger king, from Kraft. Everyone's trying to adjust to this smaller consumer spending. Why? Because the consumer's worried about three things that have not changed one iota under this current administration, and do they have money in their pocket, do they have a job and is the value of their house going up or down. Disposable income has flat lined since 2008. Unemployment - when you talk about the U-6 number, the number that includes people that have given up has doubled since 2008 and the value of their home hasn't budged one iota since the year 2000. So, there are a lot of people underwater that bought at the height of that market. It's not good out there. I think it's getting worse.

TOBIN SMITH: A pertinent pun. Yes, we're up 12 percent year over year and I believe that Gary was playing tennis when that came out. The other issue, there is no question that this cash out of the system, it's got out of the system and so, by the systems work, we have a little reaction what we've had and then we will figure stuff out. Consumers are a lot smarter than I think people give credit for and yes, there may be 2 percent less there, but there's other pieces of that economics puzzle they'll solve. And remember, the economy didn't die because we didn't have the 2 percent and you know, didn't go into a boom because we've got the 2 percent and the temporary withholding, so therefore, you know, we're going to find a marginal place.

JOHN LAYFIELD: Yeah, people are scared to buy. We have the lowest participation rate over three decades ago and we have the most dysfunctional Congress, D.C. administration in the history of this country, probably the history of the empires and America sees that.

JEHMU GREENE: Well, the payroll tax holiday was a holiday. It was never going to be permanent. I'm sure there are many children out there who want Santa Claus to come year round, but that doesn't happen. So these companies, they should be grateful that the federal government gave them this opportunity for the last two years, but look, they haven't fallen off a cliff and haven't dried up. Look back to where we were in December where they said they're going to spend and we're at 4 percent higher than the year before. And if you look at the Bloomberg consumer comfort index, half of Americans are saying their personal finance - they're looking at it highly positive which is a year high. And this is not something to be freaking out about right now.

JONAS MAX FERRIS: We should be grateful we're not raising the payroll tax to make up for the lost tens of billions to the Treasury and Social Security fund. We're only going back to the level it was a few years ago, we're lucky in that sense. This economy is not in a recession; we've lived through this payroll tax cut and for cycles going back for many, many years, to think that we need it lower or we're going into depression is absurd. We're not there now. And we can handle paying off our debt.

GARY B. SMITH: It is, Brenda. We have companies like Microsoft, like UPS, like Amazon that are envy of the world and yet, our education system, despite the fact that we pour trillions into it in the last 40 or 50 years hasn't budged one iota. We need to start measuring the teachers.

JONAS MAX FERRIS: I bet you can't find a pencil in Apple of Google headquarters. They don't do standardized testing at Google or Amazon either. It's a ridiculous way to promote somebody. They also don't have unions to the companies and there is some upside we're going to learn from this. To point of testing is an old fashioned way to decide who is succeeding or not. It's not done in corporate America, who's taken a test in a company?

JOHN LAYFIELD: Good Lord, no. Gary B. is 100 percent right. What he talked about at the P and L, that is your test. A manager is measured on merit. We're losing a lot of companies overseas because tech engineers are becoming more proficient. We have a shortfall of up to 20 million tech engineers according to bill gates and our system is failing, because of the unions.