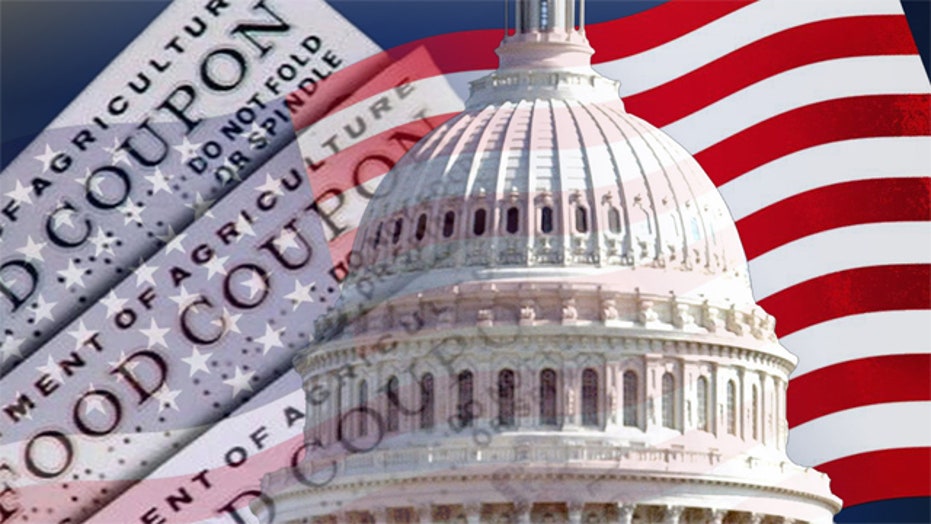 JONATHAN HOENIG: The entitlement state continues to grow, Eric, and it's wrong. Welfare entitlements are wrong regardless of who the beneficiary is-whether it's business or individuals, it's wrong. It's wrong to take money from one group and give it to another, and it doesn't help those groups either. Whether it's the welfare recipients or the supposed business "beneficiaries." Think about all the beneficiaries of the government-induced housing boom, or the ethanol boom. Government force in the economy has bad results, and that's why all this welfare, all this entitlement nation needs to reverse course fast.

MICHELLE FIELDS: The government is basically changing the very fabric of our society, where now everyone expects a handout. We have over 46 million people on food stamps. That program has more than doubled in the past 5 years, and now we're giving cell phones and bus passes to over 30,000 inmates. Why not fix the economy so Americans can, I don't know, pay for their own food, and for businesses to make a corporate profit without having to rely on welfare? It's common sense.

JUAN WILLIAMS: You hear from Walmart now for the first time saying "gee, you know what?" - in an SCC filing-"gosh, our bottom line is going to be affected by cuts in food stamps." What does that tell you, Eric? It tells you that this affects the entire American economy. Friday you had the increase in food stamps expire because we're now doing better. You see the housing market come back, the job market coming back, unemployment down. So why are we punishing the poor and people who have been struggling to get a job?

WAYNE ROGERS: It's scar, Eric, because this is a model for a fascist economy; I don't mean politically, I mean economically. Fascism is where big government, big labor, and big business are all combined together the control the economy, and that's what's going on. The government has effectively bribed big business to do this. You mentioned Walmart-out of $80B in this program, $18B of it was Walmart. Now I'm not just picking on Walmart-you're right-it's all of these. They're being bribed by the federal government to be hand in hand with the feds to do this. I don't know any way you can stop that when you have big business on the same side as government.

MICHELLE FIELDS: What bothers me is that whenever this administration has a problem with ObamaCare, they go ahead and change it like that. But when the American people have a problem with ObamaCare, there's no compromising. This administration is basically telling the American people wither you go against your faith, you go against your beliefs for ObamaCare, or you have to pay a penalty or a fine to the government. That is not okay. What kind of country are we that now American families can't even open businesses without having to give up their religious freedoms? That's not fair.

JUAN WILLIAMS: That's exactly right; you have exemptions for religious institutions, for non-profit. Now you have people who are in business to make money. They're just trying to defy the law. I don't understand this. You think we should make exemptions there for anybody who claims "hey, I don't want to pay taxes because that's against my religion"? Do you think we should have Sharia Law in the United States? I don't get it.

JONATHAN HOENIG: The only reason that employers are involved with healthcare at all is because of government. It goes back to WWII price and wage controls. That created this messed up system. Of course, ObamaCare makes it even worse by taking individual choice out of the matter completely. There's no such thing as a right to birth control. There's no such thing as a right to healthcare. If employees of Hobby Lobby don't like compensation that's being offered they should find another job. Religious freedom is freedom, and that's exactly what's under attack with ObamaCare.

WAYNE ROGERS: The president has run all over the Constitution, we know that. He's changed the healthcare law about 28 times so far, maybe more. I don't remember, but it's gotten so bad. The fact of the matter is there are whole areas here that are very personal. I think not just religion but morals, your politics, your religion-they are personal to you; they are individual freedoms. It's not the government's business to get in to any of those areas and tell you how to live your life. The Constitution was written by people who were terrified of a central government on the people. That's why the Constitution was written, and that's what we've forgotten.

WAYNE ROGERS: This is bad, Eric. Universities have got to make up their minds that they're in the business of educating students, or they're in the business of making money. The latter one is the wrong move. They've allowed college football and college sports to get to the point where the money is the deciding factor, and the universities are not doing what they're supposed to be doing, which is educating the kids.

JUAN WILLIAMS: You guys sound like you're back in the 70s and you're arguing about whether or not there should be rights for baseball players and football players. And let me just say, if you don't think that what's going on here is a business, you're fooling yourself.

WAYNE ROGERS: "FUEL UP" YOUR PORTFOLIO WITH OIL/GAS STOCKS AND (XOM)

JONATHAN HOENIG: THE MIDDLE EAST & (MES) IS A RISKY BET THAT CAN PAY OFF