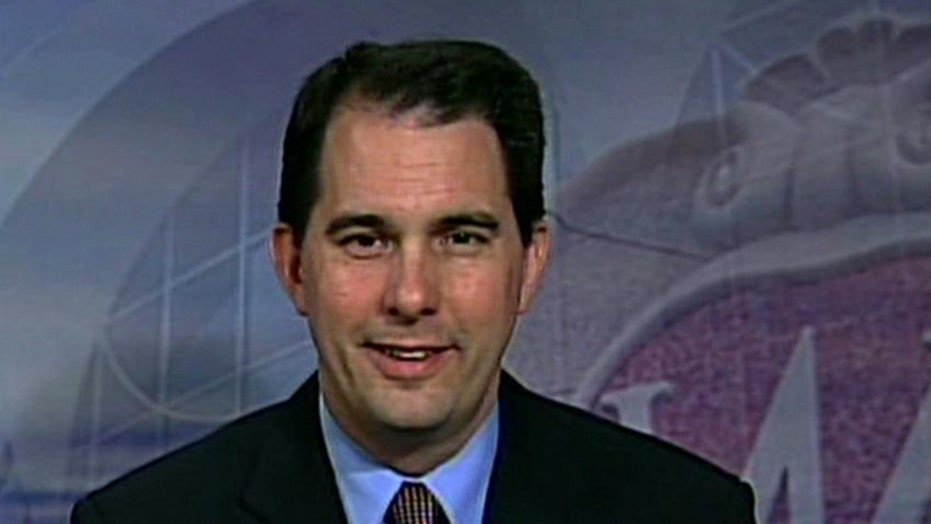 Wisconsin governor on how America can get back on track

This is a rush transcript from "Hannity," February 18, 2014. This copy may not be in its final form and may be updated.

SEAN HANNITY, HOST: So as Washington Republicans once again cave to President Obama and the Democrats on raising the debt ceiling, it's time to take a page from Wisconsin Governor Scott Walker and his state's staggering $1 billion projected surplus.

Governor Walker joined me earlier to talk about his tough stand and the tough stand the GOP needs to take in D.C. and elsewhere.

HANNITY: Governor, welcome back to the program. Good to see you, sir.

GOV. SCOTT WALKER, R-WIS.: Good to be with you, Sean, and thanks for having me on.

HANNITY: All right, so the Republicans last week, blank check to Obama on the debt ceiling. Obama himself when running for office, said $9 trillion was irresponsible and unpatriotic.

Why aren't the Republicans in Washington willing to do what you did? And I admire you for this. You put your entire career on the line, you had a $3.5 billion budget deficit. You said if we don't fix it, the kids in Wisconsin are going to have to pay it. Now you have nearly $1 trillion savings -- I'm sorry, nearly $900 million dollars you got in savings. So it's a massive turnaround.

HANNITY: Why won't the Republicans in Washington take that same tough stand like you did?

WALKER: Well, we need to stand up and help them make that part of this election, and tell them about solutions, not just what's wrong with the other side. We can't just be against ObamaCare, just against Obama. We have to tell them what we would do to make sure we didn't bump into the debt ceiling and make sure we can repeal and replace ObamaCare with something that puts the power back in the hands of people, something you and I have talked about, real solutions, conservative solutions that would get America back on track again.

HANNITY: I started this thing, I wrote "Conservative Solutions Caucus 2014," and on there, the penny plan, balance budget amendment, secure the borders, health care savings accounts, energy, which would create millions of jobs for Americans. I don't hear anybody in the Washington Republican establishment out there with that vision, solutions you call them, and tell people what they do. So is that a -- that's safe strategy, is that a good strategy going into an election?

WALKER: No, I don't think so. I wrote about my book "Unintimidated" the idea that I thought the people who win elections in battleground states, the so-called people in the center, don't want conservatives to move to the center. They want us to lead. The way you get to voters who elected not only me in 2012 in a recall election, but turned around and voted ironically for Barack Obama in 2012 as well, were people who want more than anything leadership. And as conservatives, we have great ideas. Why don't we want to go out there and lead with them?

HANNITY: You're singing my tune here, because I -- why -- what I don't understand is, you put it all on the line. You've benefited. Not only does your state have nearly $1 billion surplus, but your name is bandied about quite a bit, maybe you may get into the 2016 presidential race. Isn't that because you took a stand and led and didn't back down from a fight? Isn't that what's missing now?

WALKER: Absolutely. In fact, I -- you know, I'm flattered when people bring things like that up. It's not because of some great speech or YouTube video. It's because we went out and led, and that's what people are hungry for, particularly in times of economic and fiscal crisis like this nation still faces today. I think that's why in America, the Republicans who are doing well are governors, not just me in Wisconsin, but other governors. Look at Rick Scott in Florida. The unemployment rate is down five percent.

HANNITY: It was 11.5 percent, and now it's down to six. And look at governor -- we had Governor Perry on the program last week. He's going to have a $15 billion budget surplus in the state of Texas, pretty amazing.

So let me ask you -- and I don't want to put words in your mouth, I want to be fair, but I use adjectives like "timid" to describe Republicans in Washington. Is that a fair analysis?

WALKER: I think it's a fair comparison. If we want to win in 2014 and win in the future after that, we have to be optimistic and visionary and offer a real plan no matter what we're running for, whether it's the governor, the United States Senate, House of Representatives, or any other position out there. We have to speak in terms that are relevant to real people, not just about sequesters and fiscal cliffs, but ultimately talk about real terms that people can relate to it. And then we have the courage to act on it. That's why Republican governors are leading all around the country right now. And I believe we can get the United States Senate back if we have candidates who do just that in key races all across America.

HANNITY: If item number one that I think would unite, remember "Braveheart," unite us, unite us, William Wallace, do you think -- if Republicans said, we're going to stop robbing from our kids and cut one penny out of every dollar and make sure we balance our budget, isn't that something they should unite behind? Don't you think the country would buy into that?

WALKER: There's no doubt about it. In fact, what do people care about more than anything? They care about their kids and their grandkids. People talk about, what's the third rail, Medicaid, Medicare, Social Security, all sorts of things out there? No, what people care about, even retirees care about, my parents, they care about their grandkids. They care about my two boys are in college and their two granddaughters who are in first and fourth grade, they care about them more than anything in the world. And if they knew that this is the future they're going to inherit a debt that's a bigger personal debt than the mortgage they're going to ever pay on the largest home they bought, they would not want that for their grandchildren. They would want a simple solution to move forward. They don't want to just hear what's bad about the other guys. They want to hear conservative solution that work.

HANNITY: Right, $3.5 billion deficit, now you have a $1 billion surplus. Congratulations, Governor. You nearly got thrown out of office for that. Congratulations to you.

WALKER: Thank you, Sean, good to be with you.