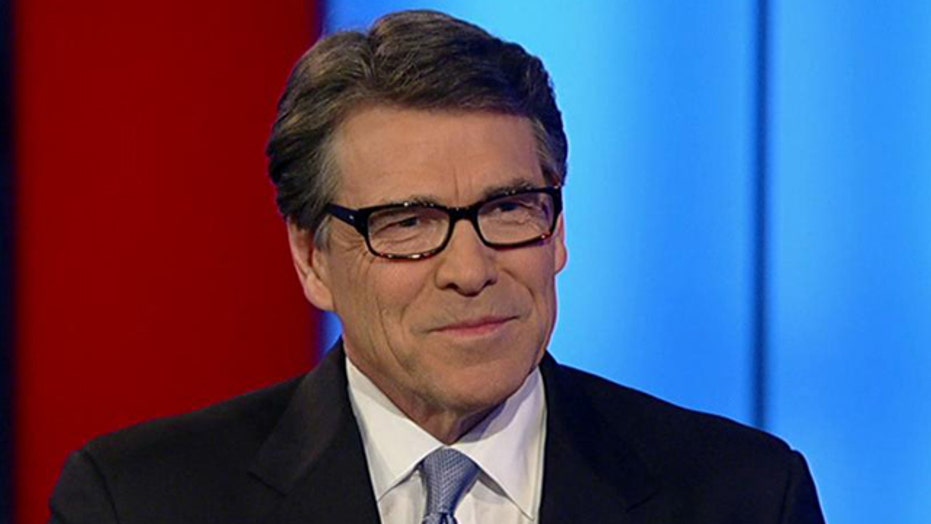 This is a rush transcript from "Hannity," March 24, 2014. This copy may not be in its final form and may be updated.

SEAN HANNITY, HOST: He is the governor of the great state of Texas. He is already being mentioned as a potential GOP candidate 2016. And he is a rare in-studio appearance, Governor Rick Perry. How are you?

PERRY: You need to come to Texas. That is a good place for you to operate.

PERRY: I remember that. They decided that guys like you that believe like you, maybe ought to hit the road.

PERRY: Oh yes there are. It is called Texas. Or Florida, I give my man, Rick Scott, he talked about --

HANNITY: He took the unemployment rate from 11 to six percent.

PERRY: When you look across the country, the states that are really doing well, the states that are creating jobs, the red states. It is Bobby Jindal, Nikki Haley. It's Rick Scott in Florida. These governors -- Kasich in Ohio. These are governments implementing what I call red state policies, and basically limited government, watching the spending, having tax and regulatory policy that is fair and predictable, a legal system that doesn't allow for over-suing, accountable public schools, then get out of the way and let the private sector do what it does best. Those states are getting ahead.

HANNITY: Here is what is amazing about Texas to me -- I read this today, report that came out. Texas holds $140 billion in petro wealth. Last time I interviewed you told me by 2015 you expect a $15 billion surplus. You don't have state income tax.

PERRY: No. Here is the key to that, somebody asked today, we were speaking at a group. They said, how do you pay for your police officers, your fire, how do you pay the services? And the fact is you grow your economy into it. I mean, we are the either fourth or fifth lowest tax burden in the country in the state of Texas.

HANNITY: By the way, you're in the number one tax burden state in the country right here in New York.

HANNITY: I'm getting the hell out of here.

PERRY: That is one of the reasons I'm up here recruiting business. You fish where the fish are, right?

HANNITY: Right. Hey, why wouldn't Wall Street one day pack up and say we're sick of it?

PERRY: Well, you can go to a multitude of places. The energy capital of the world is Houston, Texas. Without a doubt, that's where it is. The financial center should certainly be in Dallas, Texas. The technology epicenter of the world could be -- the next Silicon Valley could be in Austin, Texas. All of those are potentials and possibles, and frankly, reality in a number of those areas in the state of Texas.

Now, think about this. They have -- you have a 40 percent federal income tax, 10 percent state income tax, city taxes, county taxes, you got the highest property taxes in Westchester and Nassau County in the entire country, and they still can't, still more people are in poverty. What are they doing wrong that 10 states that are creating jobs are doing right? Why did three and a half million people leave New York?

We shouldn't be having a conversation about the minimum wage. We ought to be having a conversation about the maximum wage. That's what we're working towards in the state of Texas -- 95 percent of all those jobs in the last 10 plus years, over 27 percent of all of the jobs in the private sector in the country were created in the state Texas.

PERRY: And 95 percent of those, Sean, were above the minimum wage. You've got to be talking about the maximum wage people can --

HANNITY: There's two things that I see as an outsider as I watch Texas with an eye of maybe moving there, in all seriousness. I watch oil on private lands because federal leases are down.

PERRY: Only 50 percent of Texas is state or federally owned

HANNITY: Right, got it. OK. And then the litigation reform you made, my niece just became a doctor, she's practicing in Houston.

HANNITY: Those two things. New York lost three and a half million people and New Jersey lost $70 billion in wealth in a four year period.

PERRY: Two states over the last decade have lost more wealth -- more wealth has left California and New York than any other states in the nation. Why? Well, you know why. Over-tax, overregulate, over-litigate, and you finally say, you know what? California is a beautiful state. What is not to like about the weather, about the wine? They got it going in California, right? But the fact is there is a point in time where you just go I can't take this anymore. I'm not going to sit here, be taken advantage of, not appreciated. I'm going to leave.

HANNITY: You're done when?

HANNITY: Are you running for president?

PERRY: Sorry to say, I told you I gave up on running. I'm riding a bike now.

HANNITY: Good line. But are you thinking about running for president?

PERRY: 2014 is a real focus right now, and that is the message we're taking into Iowa --

HANNITY: Will you be in New Hampshire, South Carolina next?

PERRY: We'll be in South Carolina. I don't know whether we're going to be in New Hampshire or not, but chances are. That is a state that obviously will be receptive to that message about freedom. I mean, live free or die, they get it in New Hampshire.

HANNITY: They do. They do.

PERRY: Absolutely. And they don't have to.

HANNITY: And they don't have to, good point.

And governor, thank you.