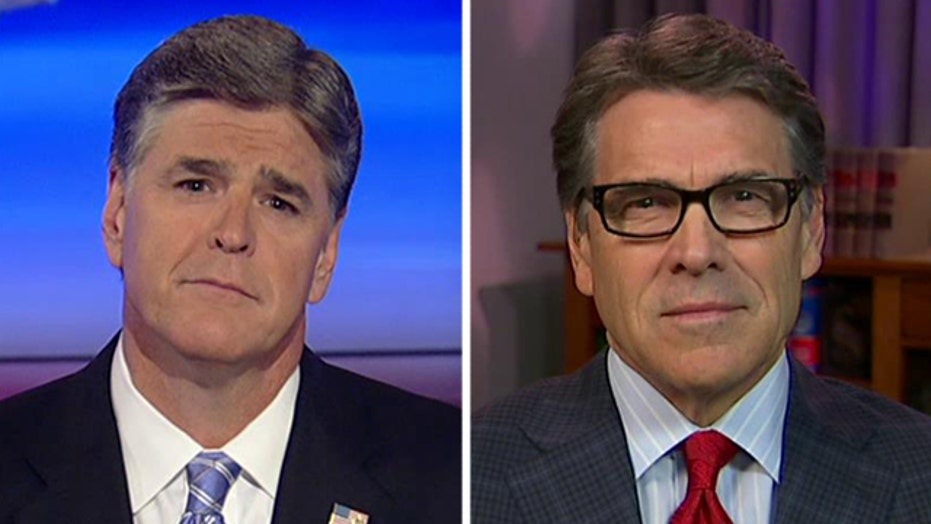 This is a rush transcript from "Hannity," October 1, 2014. This copy may not be in its final form and may be updated.

SEAN HANNITY, HOST: And in the wake of the Ebola diagnosis in Dallas, questions are being raised about whether or not the president should have made these comments to the American people just two weeks ago. Take a look at this.

PRESIDENT BARACK OBAMA: First and foremost, I want the American people to know that our experts here at the CDC and across our government agree that the chances of an Ebola outbreak here in the United States are extremely low.

HANNITY: I guess not so low! Back in July, the CDC also said that Ebola did not pose a significant threat to the U.S.

Here with reaction is Texas governor Rick Perry. He joins us tonight from Dallas. Governor, good to see you. Thank you for being here, sir.

GOV. RICK PERRY, R-TEXAS: Sean, it's a pleasure to be with you.  Thank you.

HANNITY: All right, here are the headlines that I have. First of all, the ambulance crew that transported this patient in Dallas -- now, they're under quarantine at this hour. We know that we have a top infectious disease specialist saying many Americans, in fact, will be infected by Ebola. I'll give you the details about that in a minute. You have CDC saying Ebola can be contacted while standing within three feet of an infected person. And in Dallas, there was a report out today that the Ebola patient may have already infected up to 12 Americans.

So these are more serious headlines than what the federal government's leading us to believe. What's your take on the ground?

PERRY: Well, obviously, we take this extremely seriously in Texas.  And you know, we would rather have not had this Ebola virus show up in the United States at all, but if it had to show up somewhere, that Presbyterian hospital where this patient is being in isolation is one of the most technologically advanced, has some of the finest equipment, more importantly, passionate and compassionate men and women who are there serving.

And I want to make it really clear that this isn't an outbreak. This is one case. And the people of the state of Texas, the Dallas officials that we're working with, both the mayor and the county judge and the Dallas health officials -- the CDC has been a very willing participant and partner in this, of course, the state health director, and we've got a great team of people in control of this.

This person's in isolation. We have the other -- I think it's 18 people in total that are being monitored at this particular point in time.  And I think it's very important for the people of the state of Texas and the city of Dallas to know that this situation I think is well in hand.  But very important that we continue to keep this individual isolated and those others monitored. And hopefully, this will be the end of this event.

HANNITY: All right, there is a story that came out, our own John Roberts reporting, in a pattern they see often in Liberia in the capital, the family of the woman, her name -- well, her name is -- anyway, took her by taxi to a hospital with Mr. Duncan's help on September 15th after failing to get an ambulance at her parents'. She was convulsing and seven months pregnant, turned away from the hospital for lack of space. The family said it took Mrs. Williams (ph) home, and she died later that evening.

So in those countries where there is widespread infection and there's no medical infrastructure, these people are dying. It's not so much the case here in America, but there's still a fear and concern out there. What do you say to those people?

PERRY: No, absolutely. And I think there's two issues here. One is that we do have an infrastructure that's in place, incredibly capable, professional. In Africa and many of those countries, they don't. I think the United States has a role to play in that. We have the CDC that's stood up, I think, 130 individuals, more than they've ever had outside the United States before. We have our military there. We have technologies that, hopefully, will be available to those countries and the U.S. can play a major humanitarian role in this.

And while that's going on, we need to do everything that we can to make sure that we're screening properly, that we're putting clear procedures into place into those countries that have Ebola, that individuals who are traveling back to the United States are properly screened, and then obviously, when those individuals that are showing any symptoms, that we get them tested as soon as we can.

PERRY: I'm very comfortable that the professional way that Texas has handled this, that Presbyterian hospital has done a very good job...

HANNITY: It's a great hospital. I -- I'm aware of that. Let me ask you a final question. I don't think most people know this, but it was on Whitehouse.gov, and as published in Gatewaypundit, I believe, that the very same day that this Liberian national entered this Dallas hospital, later to be diagnosed with Ebola that very same day, the president signed an order suspending deportations of Liberia nationals for 24 months.

You've been a very outspoken critic of the president's immigration policy. I've been down there at the border. I sat in a briefing with you, and we found people -- I heard that people are coming from Syria and Yemen and Afghanistan and Pakistan. Is -- was that a good idea of the president to do that?

PERRY: You know, I don't think it was. But the fact is, we have to have our borders secure. And I think whether it's on the human health side or whether it's on the side of keeping people out of this country that want to do harm to -- not just harm to our citizens from the standpoint of coming into this country and maybe an act of terror, but those criminal elements, and making sure that that border is secure should be one of the most important jobs that the president of the United States and our colleagues in Washington, D.C., are engaged in. They have not done that.

HANNITY: Maybe it shouldn't take the government to so long to identify what happened in Oklahoma, nearby you, as an act of terror.  They're having a full-scale investigation now, Governor. I think I already know the answer, looking at this guy's Facebook page.

PERRY: You know, I said the other day that the White House is going to have to deal with this. It's going to have to, you know, get straight to the point here. We know what's going on. And the idea that this is everyday workplace violence -- Americans know that's not the case.

HANNITY: We're being lied to every day!

PERRY: And every day that goes by without pointing out the fact that this was most likely an act of terror is not in the best interests of America.

HANNITY: All right, governor, good to see you again. Thank you for being with us.

PERRY: Good to see you. Thank you.