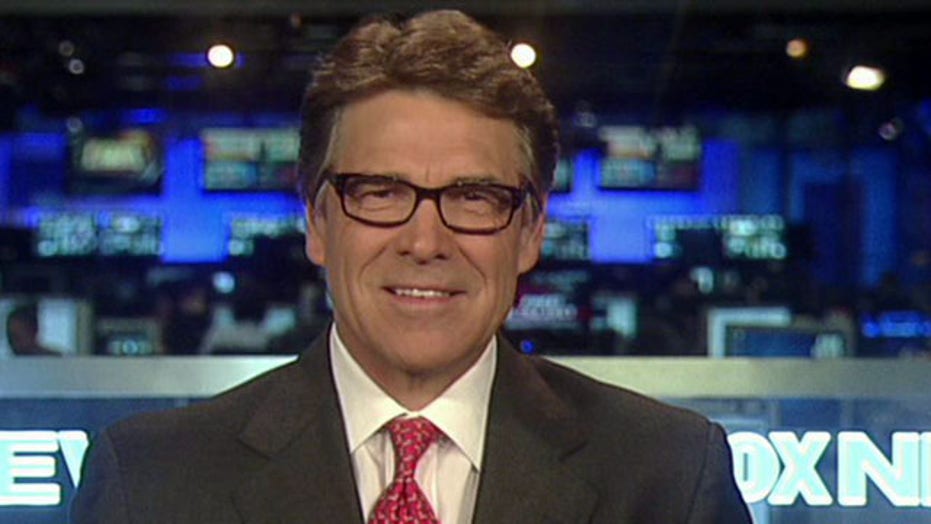 Governor says the administration is 'not serious' about border security

This is a rush transcript from "Hannity," June 17, 2014. This copy may not be in its final form and may be updated.

SEAN HANNITY, HOST: The crisis on the southern border appears to be getting worse by the day as thousands and thousands of illegal immigrants including unaccompanied children continue to enter the U.S. from Central America. This year along more than 47,000 children were apprehended at the southern border. That's a 92 percent increase from 2013. The situation is getting so bad that border patrol agents are completely overwhelmed and holding facilities are so overcrowded. My next guest, Texas Governor Rick Perry says that even though he warned the president that this would happen nearly two years ago, clearly he has yet to get a response. Joining us now is Governor Rick Perry. Governor, good to see you. Welcome back to the show.

GOV. RICK PERRY, R-TEXAS: It's good to be with you, thank you.

HANNITY: Let's start with how bad is this? We keep seeing these pictures, people are suffering, the numbers of people coming across the border, I saw pictures from this weekend, and literally for 100 bucks you got on a jet ski and you got to go right into Texas. What is going on there?

PERRY: It is an absolute overflowing mess is what it is. And this is something we brought to the attention of the president over two years ago, back in 2012, when we saw this was a major issue. We flagged this. And we're still waiting for a response not just from the president but from the administration. So it is a major problem. And 1,000 people a day is what we're seeing apprehended at the current rate. I mean, it's just an impossible figure to really get your hands around. We've got an amazing amount of resources on the border.

We've had some success there and shutting down illegal activities with surges. But we don't have the resources. I mean, number one, it's not the state's responsibility to be dealing with this issue. We're doing our part to make sure we can keep our citizens as safe as we can. But the federal government is just absolutely failing. We either have an incredibly inept administration or they're in on this somehow. I hate to be conspiratorial, but how do you move that many people from Central America across Mexico and into the United States without there being a fairly coordinated effort?

HANNITY: How would you then define this? And why do you think this is now happening all of a sudden? And, in other words, why aren't the people when they come across, why aren't they just being sent back?

PERRY: Yes. And what we're seeing is that there is a clear coordination in some form or fashion. These young people in particular, to move across Mexico, I mean, this is some pretty harsh environment from the standpoint of -- you have the humanitarian side of this, forcing these kids on to trains and then -- it is a staggering concept when you think about moving that many people across Mexico.

And, again, here's my big concern. As the governor of Texas, of a state that on a fairly regular basis gets hit by some major events. I'm talking about hurricanes and in this case, we're going into hurricane season. If we were to have a Katrina where we have a massive inflow of people out of a state that's been hit or our own state and we have to evacuate away from the coast, I don't have any place to go because the facilities we have historically had available to house our citizens in the United States are full of these individuals now who are coming in from Mexico.

HANNITY: Why won't -- it seems like there's no will in Washington to just enforce the law. For example, in Mexico, their laws are very clear, that if you entered Mexico illegally, you are either, a, put to jail, or you're sent back to the country you come from? Why aren't we enforcing the laws in this country? Why is the administration literally putting people on airplanes and dropping them in Tucson and dropping them in Phoenix and dropping them in your home state?

PERRY: You'll recall back, a few years back, they had the catch and release program, that's what we called it. They would apprehend people at the border and then they bring them inland, sometimes up to 150 miles, give them a summons to show up at the courthouse in 20 or 30 days. You know how that worked out.

There is a clear concept, if you will, from this administration, there's clear effort to allow these individuals to come in. So the administration is not serious about border security. We have known that for a long time. Congress refuses to deal with the issue. And the American people are going to demand that we secure this border, because there are two things going on here, from the standpoint. If you don't secure the border and if you don't overhaul the INS, I will suggest to you that you can pass all the immigration bills you want to pass, but until you've overhauled the Immigration and Naturalization Service, then it's all for naught.

HANNITY: First of all, it increases the cost of education. It impacts our criminal justice system. It impact American major -- now we have some health issues along the border because of this recent influx.  But if 1,000 people are crossing into Texas every single day illegally, then at what point do you say that you're now obligated, you have to take care of them, right? Eric Holder is talking about providing lawyers to each and every person that is coming across the border every day.

PERRY: This is a national disaster is what we're talking about here, and this administration refuses to address the constitutional requirements to secure our borders. And again, we have put over $500 million of Texas taxpayer money into assisting with the securitization of the border, if you will, and we get zero -- what I consider to be zero help from this administration when it comes to addressing one of the core responsibilities. You know, I go back to -- I'm a big proponent of the 10th Amendment, that the states need to be making a lot of decisions about issues like transportation or education or health care delivery, but the federal government has a few enumerated constitutional duties, and this administration is totally failing.

HANNITY: What about looking at this through political prism, an internal debate within the Republican Party, and that is about immigration?  And those that think for the political party to expand and thrive, that there has got to be Hispanic outreach. Part of Hispanic outreach has to be the issue of immigration, and that would include some manifestation of amnesty. What's your answer to that?

PERRY: Amnesty is not the answer at all. And anyone who would be for that has no concept of what is going on. You have to secure the border.  If you don't get that border secure, all of these conversations are absolutely for naught. Then I think a reworking of the agency -- why would you pass immigration reform with the same INS in place? If you don't reform the INS then you are completely wasting your time. So there are a lot of steps before you can even have a legitimate conversation about immigration or immigration reform in this country.

And I think Hispanic voters out there, they want to live in safe communities. They want to live in a place where they get to keep more of what they work for. The policies of the Republican Party are in line with the Hispanic voter across this country from the standpoint of economics in particular. And securing that border, first step before you can ever have these conversations.

HANNITY: Governor, appreciate you being with us. Thanks so much.