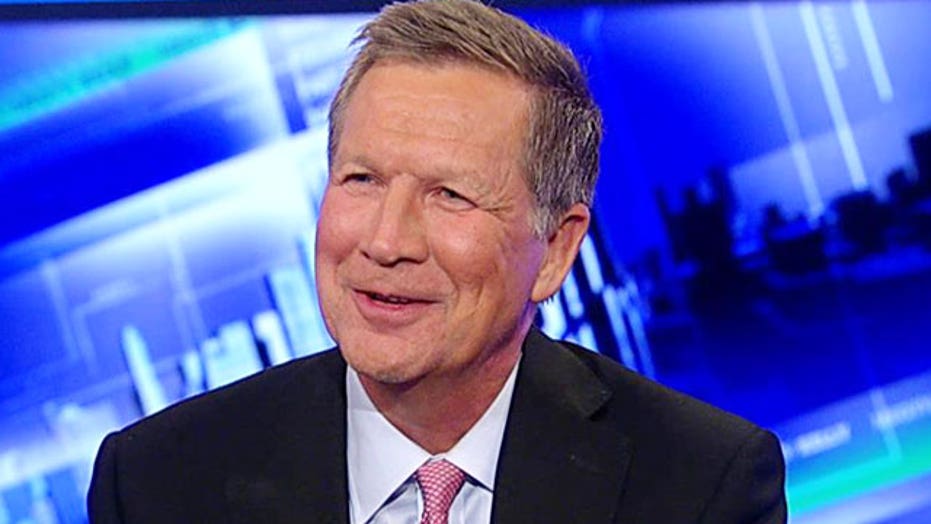 John Kasich on why governors should jump into the 2016 race

Potential presidential candidate speaks out on 'The Kelly File'

This is a rush transcript from "The Kelly File," May 19, 2015. This copy may not be in its final form and may be updated.

MEGYN KELLY, HOST: New developments tonight in the ever expanding 2016 race for the White House. We recently interviewed four current or former governors, they hailed from a range of red, purple and blue states. Many say governors are best prepared to handle leading this country, tonight one more, joining me now, Ohio governor and potential 2016 Republican presidential candidate, John Kasich.

Great to see you Governor, thank you for being here.

KASICH: You had the debate about governor or senator. You know I've been almost both of them. I was a member of Congress for 18 years and chairman of the budget committee, and by the way also served on the Armed Services Committee so I have national security experience, 18years there.

And then being governor, there's no -- there's nothing like the experience of being a governor, Megyn, because every day you wake up, and there's another thing you have to tend to, have you to make quick decisions and you have to be in charge. And guess what? At the end of the day, there's a bottom line. In my state, you know, we're up 340,000 jobs, we've cut the largest amount of taxes and we lifted Ohioans to the point where I won 86 out of 88 count counties, including 26 percent of African Americans, 51 percent of union households, 60 percent of women, and that's Ohio. We're talking Ohio, so it's all good.

But look, experience matters, so I've had the experience in Washington, as chairman of the budget committee and military reformer. And then being the governor of Ohio, one of the biggest -- the 7th largest states in the country.

KELLY: Your critics say you're a spender, you're like a George W. Bush spender.

KASICH: Really? Well why is it I am running a $2 billion surplus, I inherited an $8 billion hole. There was an AP report that said that over 20 governors are now running budgets that are structurally imbalanced, mine is not structurally imbalanced. I'm running a surplus. Plus, I cut taxes by $3 billion, and when I was chairman of the Budget Committee, we balanced the federal budget we had a $5 trillion surplus, we cut the capital gains tax. So if someone says I'm a spender, I may spend on things that really matter. I know how to set priorities and that's important.

KELLY: Do you consider yourself a compassionate conservative like George W. Bush?

KASICH: I don't like titles. What I know is that economic growth is not an end in to itself. It's a means to an end, and we need to lift everyone.  Let me tell you, I just did all this with Hillary, and people running around with Hillary. Hillary can absolutely be beaten, but they're not -- she will not be beaten unless somebody has a big message about lifting America and making America great again, with programs and plans to do it.  Everyone should be included, everyone should rise, everyone should feel the opportunity in America, and there are many Americans today who say I'm not sure that American dream still exists and we have to fix that.

KASICH: No, I would never have gone in there. Megyn, look, I have a history of this. I was opposed to U.S. involvement in Lebanon, it was a civil war and I voted no and I was one of very few Republicans that did. I was opposed to the war in Bosnia, I was not in favor of civil wars, but I supported the first Gulf War. But going into Iraq with no weapons of mass destruction makes no sense because it was not in America's great interest.  All of this business about nation building? You go, you take care of business and you come home. You don't spend your time there, it makes no sense.

And by the way, the Iraq thing all the way from releasing the Iraqi military, it's been bungled from the beginning.

KELLY: Governor, we have so much more we need to discuss.

KASICH: We do. We're short tonight. How about I come on for half the show. Come on, let's get it going.

KELLY: We'll have an After the Show Show.

KASICH: I'll do Hillary and me, how is that?