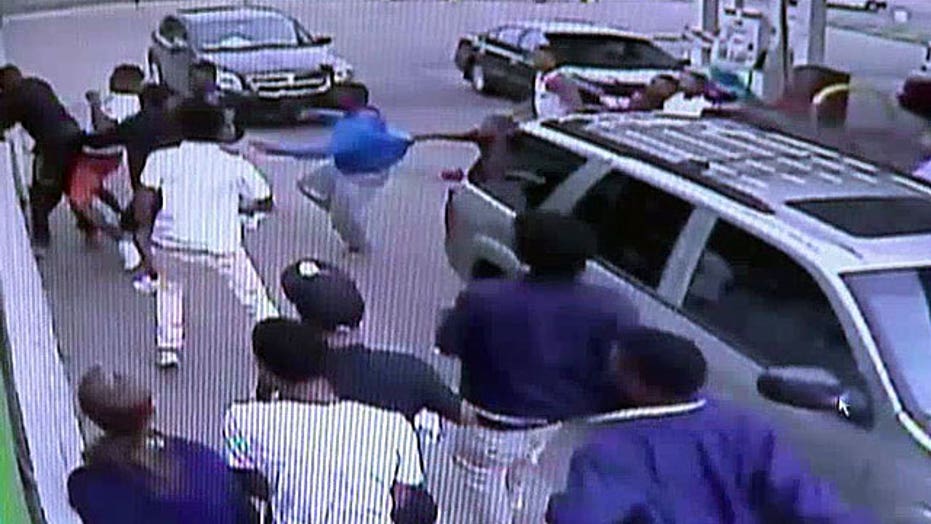 Good Samaritan brutally beaten by mob of teens speaks out

Man was helping elderly woman get into her car on 'Hannity'

This is a rush transcript from "Hannity," April 16, 2015. This copy may not be in its final form and may be updated.

SEAN HANNITY, HOST: Another vicious attack caught on tape, this time at a gas station in Memphis, Tennessee, where a man was walking a scared elderly woman to her car was literally rushed and beaten by a mob of teenagers.

Joining us now is the man viciously beaten in the video, Orrden Williams Jr. Sir, thank you for being here. By the way, was that the little girl that was in your car?

HANNITY: I'm sorry. I can't see. I read in the paper a girl. But what's his name?

HANNITY: Well, all right. So this -- you're in a convenience store.  We'll show the tape again. Walk us through. There's an elderly woman that wants to go to the car. You decide because there's a lot of kids out there and she's nervous, right, you want to walk her to her car, right?

WILLIAMS: Yes, sir. Actually, the kids were doing more than just loitering. They were in the parking lot jumping up and down, throwing gang symbols, you know, it was kind of like a pep rally. That's what made her scared.

HANNITY: And she wants you to walk her out. So you're being a Good Samaritan. You walk the lady out to her car. And then all of a sudden, you know, these kids come up to you, and you get coldcocked here literally from behind, there you are. And then here come the kids. Did you say anything to them? Because that one kid punches you right in the back of the head. What did you say to them?

WILLIAMS: When he hit me, I turned around. I said, is that your best shot? And you know what time it is. And that's when the guy to the right of him, that's when he hit me. And my first thought was to get inside of the store so I could get my back against the wall.

WILLIAMS: To fight back. But the store owner closed the door.

HANNITY: He wouldn't open the door.

WILLIAMS: So I couldn't get in. So I had to go to my family vehicle.  And I didn't want to do that. I wanted to keep my family and the lady I was protecting safe.

HANNITY: So in other words, your baby, your son was in the car, your family is in the car. So you purposely put yourself out there. They wouldn't let you in the store. And all these kids are pounding on you. How bad are your injuries?

WILLIAMS: They're not bad. My lower back, it has some problems, but as far as facial, no problems. I mean, I came out -- I came out OK. But I have, you know, some lower back issues.

HANNITY: But you had a gun with you.

WILLIAMS: Well, I will say this. I don't want to say what I had, but I had something to protect me and my family, and --

WILLIAMS: Yes. It was a tough call, because there's kids involved, and to pull a gun on kids and to kill kids after what I went through. I knew after when I got in the car that they didn't do any damage. I played college football. I know what being hurt is all about. I knew they did no damage. So at that point, I saw no need to pull out anything to give me a peace of mind.

HANNITY: You would have been within your rights to defend yourself, and I applaud you for your discipline. What do you want to happen to the kids? Do you want these kids all prosecuted? We have their faces on video. Shouldn't they be prosecuted?

HANNITY: Yes. Those kids took a good shot at you.

WILLIAMS: This was about four o'clok in the afternoon.

HANNITY: He coldcocked you from behind, and then other kid came in with a roundhouse.

I mean -- listen. I applaud you. I think it was very, first of all, kind of you to take that woman to her car. Amazing discipline that you had that you were taking those blows and you didn't pull out your weapon, really incredible, incredible patience on your part and thank you for telling your story.