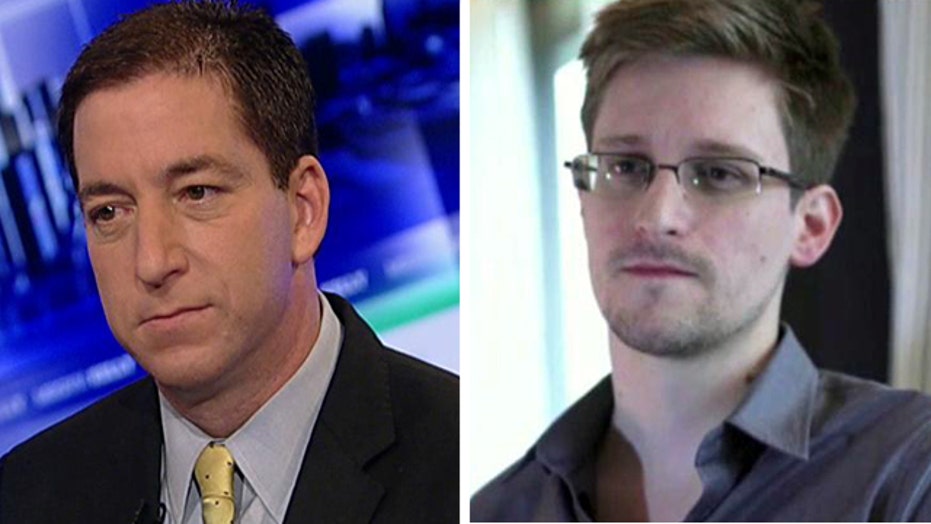 This is a rush transcript from "The Kelly File," May 16, 2014. This copy may not be in its final form and may be updated.

MARTHA MACCALLUM, GUEST HOST: Well, when Edward Snowden was ready to leak the classified documents that he had stolen from the National Security Agency, one of the first journalists that he reached out to was Glenn Greenwald. Now that journalist is out with a new book called "No Place to Hide." It details how he met the NSA leaker and why he decided to expose the United States surveillance program.

Here to talk about it with us first on "The Kelly File" is Glenn Greenwald. He's a former columnist for the Guardian and now co- founding editor of theintercept.com. Glenn, good evening. Good to have you with us.

GLENN GREENWALD, FORMER COLUMNIST FOR THE GUARDIAN: Good to be with you, thanks.

MACCALLUM: It's very interesting. It just, you know, got through some of the beginnings of your story here, but you talk about what it was like when he first reached out to you. When you say because you had developed a reputation for being somebody who was interested in uncovering these kinds of stories, you always kinda kept it a little bit of an arm's length because you got a lot of crazy stories coming your way, right?

GREENWALD: Yeah, you know how it is, people contact you almost every day and say I have a huge story for you, and unless they're give you some real indication that it is, you tend to deprioritize them because 99 percent of the time it turns out to be crazy, or nothing, or something worse. And that's all that happened was we had a hard time communicating him, in the beginning he wanted me to use encryption to protect the privacy of our communications knowing that the NSA can listen in on even conversation between journalists and sources.

MACCALLUM: Yeah, it's real like a spy novel. He talks -- he writes and signs everything (INAUDIBLE). And you got to Hong Kong and you meet with him.

Did you have reservations? Because obviously you've been hit with, you know, just a boat load of criticism for uncovering national security secrets that the top echelons of American intel say put us in great danger.

GREENWALD: You know the purpose of journalism is to challenge those who wield political and other kinds of power, not to accommodate them or be differential to them. So, when you shine a light on what politicians are doing, that they keep secret from the public, of course you're gonna get attacked and criticized in every single time. There is some kind of what they called unauthorized disclosure, which means reporting things to the American people that they're doing in their name that they kept secret from them. They read from the same script. It's helping the terrorists, it's endangering national security.

MACCALLUM: You were concerned that you are actually gonna do something that might put people's lives in danger.

GREENWALD: No. Of course, I mean, you are you as a journalist. I mean we got tens of thousands of documents from Edward Snowden. We've had them for a year and we published a very small percentage because we've been very meticulous and pain staking about -- at his insistence -- only publishing that which informs the public without actually damaging or harming anybody.

MACCALLUM: What's his life like now? He's living in Russia. He can't go anywhere, if he leaves he's probably gonna be arrested. What's your communication with him? What's it like?

GREENWALD: I talk to him very regularly over encrypted chat technologies. You know, Russia is not a place that he chose to be in. He was trying to transit trough on his way to Latin America to seek asylum.

MACCALLUM: A lot of people see him as being used as a pawn by Russia.

GREENWALD: Well, I mean, again, the U.S. government forced him to be there because he tried to get out on his way to Havana through Latin America where you want to seek asylum.

And you know, I think the question really is not why is Edward Snowden in Russia, it's more why do whistle-blowers under the Obama administration who get prosecuted at a greater rate than any president in prior history feel the need to flee in order to avoid life in prison for informing their fellow citizens of what they ought to know? And that to me the more compelling question, but he is very content in the choice that he made. He told me he puts his head on his pillow every night knowing that he took action in defense of privacy rights for his fellow citizens. And that's not something that most people can say and he's one of the happiest people I know.

MACCALLUM: You and he have had a lot of people come down on you for this. And then you have support of those like Rand Paul and our Judge Napolitano.

So, very interesting story, Glenn, thanks a lot for talking about it.

GREENWALD: Thanks for having me. Really appreciate it.