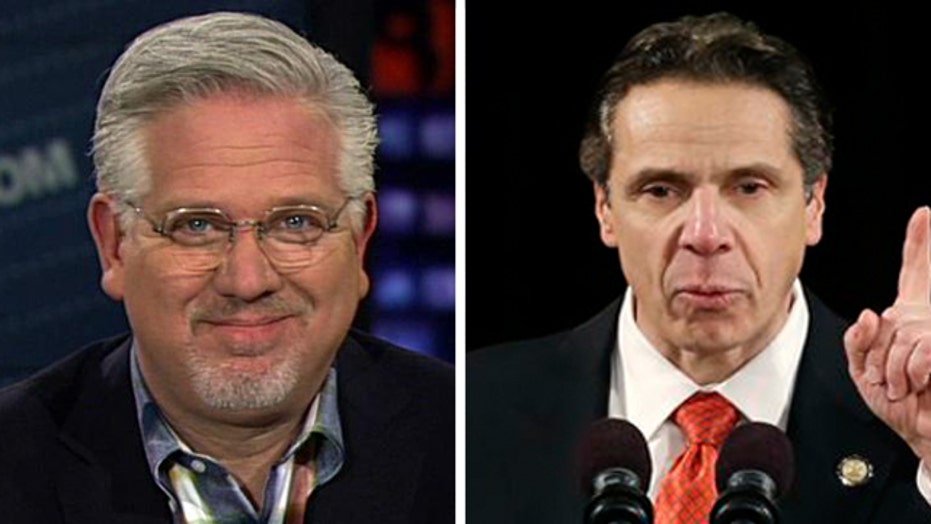 This is a rush transcript from "The Kelly File," January 21, 2014. This copy may not be in its final form and may be updated.

MEGYN KELLY, HOST: New fallout tonight as one of the most powerful voices on the airwaves today writes a hard-hitting open letter to New York State Governor Andrew Cuomo. Reacting to Mr. Cuomo's recent remarks that conservatives have, quote, "no place in New York State."

GOV. ANDREW CUOMO, D-N.Y.: Their problem is not me and the Democrats, their problem is themselves. Who are they? Are they these extreme conservatives who are right to life, pro assault weapon, anti-gay? Is that who they are, because if that's who they are and if they are the extreme conservatives, they have no place in the state of New York because that's not who New Yorkers are.

KELLY: Glenn Beck is the man who wrote that letter to Governor Cuomo. He is founder and chairman of "The Blaze."

Glenn, great to see you. This got you all fired up, explain why?

GLENN BECK, "THE BLAZE" FOUNDER AND CHAIRMAN: Because I think what's happened here is Cuomo is reacting to Bill De Blasio. There's a hostile takeover from the radical left of the Democratic Party in New York and I think he's trying to assert his position. It's a position that's going to leave him in the dustbin of history. If he can't -- he says he's talking about politicians, but, OK, if we can't have politicians who stand up for the Constitution, stand up because they have a point of view, that you have a right to life as an unborn child. The hatred of gays is a totally separate thing, but those two in particular are essential for us to argue about and have debate about especially in politics.

If we can't live in the same state and work in the same state, what do we have? We have to decide, can we live with people of different points of view? If we can't, we've seen that road in the 20th Century over and over again and it doesn't end well.

KELLY: You know, you say, he's talking about politicians, but the problem for Governor Cuomo among others in that statement is he then finishes it by saying, those politicians -- giving him the benefit of the doubt -- have no place in the state of New York because that's not who New Yorkers are. And we have so many viewers write in and say, who is he to say who New Yorkers are? I mean, you look at the state's make-up and yes, the state leans left. We have prior to Governor Cuomo, a Republican governor in this state. There have been many politicians in New York State who have been pro-life and not anti-gun as Governor Cuomo would have the world believe.

You talk about the importance of respecting minority rights, and the history of our country and the troubles it leads to when we don't do that.

I mean, where would the disenfranchised of the world in history be if we didn't have that push back? Here's a group of people, and Governor Cuomo I'm sure would be all for tenure at schools. But yet we can't fire a teacher because we need to protect that discourse. But in political life, we can't have a free exchange of ideas because you just don't belong here?

First of all, Governor, let me tell you something, we were one of the first on the scene -- my charity organization, which has given $14 million away in the last 18 months. We were one of the first from Texas back to New York, we have helped some of the hospitals in New York with hundreds of thousands of dollars.

So we're good citizens, we're there, we put our money and our back where our heart is, plus, we pay hundreds of thousands of dollars in tax. We employ over 200 people. I have 200 people that work in New York State and New York City. Are they not welcome? Is our money not welcome?

KELLY: Are you going to leave? You suggest in the letter you might?

KELLY: It's the beautiful weather.