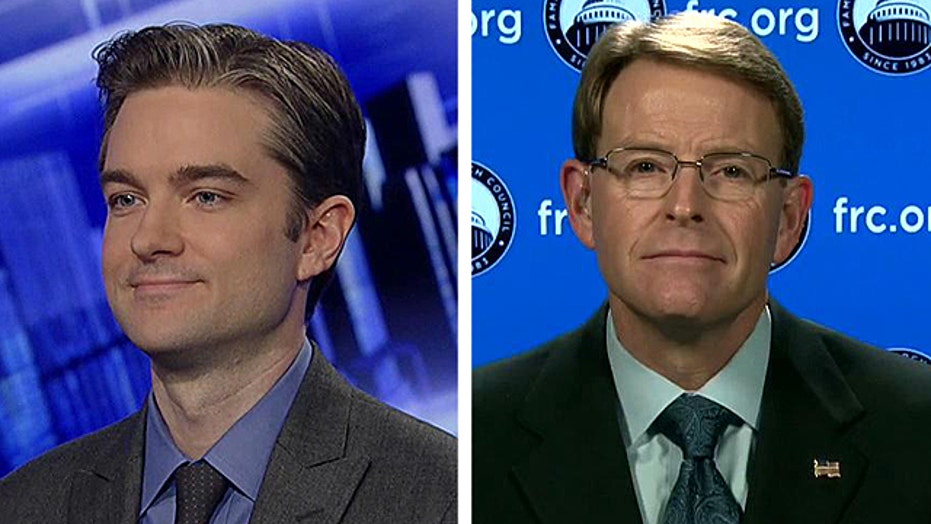 This is a rush transcript from "The Kelly File," December 19, 2013. This copy may not be in its final form and may be updated.

MEGYN KELLY, HOST: We begin tonight with Jeremy Hooper. Special projects consultant for GLAAD, a lesbian gay bisexual and transgender media advocacy organization that has publicly addressed the controversy. We will have Tony Perkins on in a minute. Jeremy, thank you for being here.

JEREMY HOOPER, GLAAD SPOKESMAN: It's great to be here.

HOOPER: No one has claimed they cannot, what they cannot do is do so in a vacuum. This is not a free speech issue. Defenders of Phil Robertson are seeking is freedom from consequence. None of us are entitled to that. If right now, I were to say something to you completely outlandish, GLAAD would never allow me back on your air again. If you were to give a press interview with GQ, and were to say something outlandish, Fox News may put you on indefinite hiatus. We all have to answer to our employers.

HOOPER: Yes. Please hide your children's ears. Because he said that someone like me is equivalent of someone who has sexual intercourse with animals. That's essentially what he said.

KELLY: All right. Let me show the viewers.

Now, his defenders Jeremy said, that's not linking homosexuality to bestiality, it's saying what's sinful, and he gave a list and on the list --

HOOPER: He also equates us with terrorists. And let me also say, his defenders are the same people who traffic in some of the most anti-LGBT rhetoric around. You're going to have Tony Perkins up in a minute. Tony Perkins has said some of the most vile and inhumane things about people like me imaginable.

KELLY: What specifically? Because I will ask him.

HOOPER: He himself has compared gays to terrorists. He said it is a fact that gay people face eternal damnation. He actually defended the Uganda law, that death penalty attach, and then quietly removed and denies he ever did it. But I have the audio which I will gladly provide you if you ask for it. We at GLAAD have a project that we call the commentator accountability project where we don't have networks to not book Tony Perkins, we just say if you are going to book Tony Perkins, please hold him to account. And that's something networks do often not do.

KELLY: Now, you know what his defenders -- Tony Perkins is going to say and what Phil's defenders say. And they say that this is a Christian belief. Not the linkage to bestiality. I'm not conceding he linked it, I'm not taking a position on that. We'll let the viewers decide whether that's a linkage.

And on the terrorist thing, let's just show the viewers what he said and the terrorist. Because there is also a question about what he meant there. But this is what he said, "We never, ever judge someone on who is going to heaven or hell. That's the Almighty's job. We just love 'em, give 'em the good news about Jesus -- whether they are homosexuals, drunks, terrorists. We let God sort them out later. You see what I'm saying?" So, I understand your side, so that's linking, the other side says, it's not linking, it's just a list of --

HOOPER: Well, let me give you one tasty little nugget, one of his defenders is actually the Westboro Baptist Church. The notorious "God hates" -- the word I'm not going to use '' "church."

HOPPER: But they are vocally supporting him.

KELLY: Let me ask you this. Let me ask you this. Because you know that there are a lot of people in this country -- I mean, half of the people in the country, 45 percent say, homosexuality is a sin, 45 percent say, no, it isn't, according to the latest poll. So, a lot of people out there who feel as Phil does, right? That's it's a sin. And they say, he is just expressing -- albeit in some controversial terms -- what I feel and I don't want to be silenced. To them you say, what?

HOOPER: Well, let me start with also -- we've completely over looked the racist element which is another -- arguably more compelling element that what I hope you'll mention. I do question that poll a little bit. But we see the majority support is trending towards equality.

KELLY: For those who are saying he speaks for me.

HOOPER: He could have said he's against marriage equality. If you want to stand with Phil Robertson, the bottom-line is this, you are not standing with freedom of speech. You are standing with very anti-gay comments. You are allowed to do that. But between knowledge that these are very hurtful comments, very dangerous comments, to young people particularly. And not just gay young people but also straight allies and even people like myself. I have a two-month- old daughter. And it kills me that she someday by me appearing on your show tonight, she might find me somebody and find these comments and see that this happened in 2013, the year of her birth.

KELLY: -- Directed at gays and lesbians.

KELLY: I understand. Thank you very much for being here. We'll going to move on to Tony, who's president of the Family Research Council, a group who's mission is to advance faith, family and freedom and public policy and a culture from a Christian world view.

Tony, good to see you. Let me just give you the floor now. Because you heard what Jeremy had to say.

TONY PERKINS, FAMILY RESEARCH COUNCIL PRESIDENT: Well, Megyn, look. This issue is about reality TV. And you have to question A&E. If they didn't want the Robertson family to talk about who they are, what they believe and why they believe it, then really didn't want reality TV. I would encourage people before they jump to conclusions and I appreciate you putting the quotes up there on the screen. But before they believe the organization of GLAAD, that traffics in lies and distortions, they should read the article for themselves. I read it, you know, I think the writer did a pretty good job of capturing the Robertson family. I kind of laughed at it. I think that he was coming from a different perspective. I didn't quite understand it. But I thought he did a fair job of capturing the essence of who they are.

KELLY: Uh-hm. Let me ask you the same question I asked Jeremy which is, why can't those who are gays or lesbians or who support them voice their objections to this kind of talk and argue against this viewpoint and, as happened here, ask others like A&E and sponsors to reject it?

PERKINS: Well, they have every right to do that. And that's what we would argue for is that we have a fair and free debate. But notice what GLAAD did. GLAAD immediately called for the head of Phil Robertson on a platter. They wanted him removed because they didn't want someone able to speak to this.

Look, when you are in a fight, what you do? You go after the biggest guy, and you try to knock him out so the others run. That's what GLAAD does, they go after people who have platforms who will talk about natural marriage or talk about biblical morality and they try to knock them out and silence them to intimidate others.

Look, Jeremy was talking about GLAAD and what their mission is. You realized last year, they gave one of their highest awards to a guy named Dan Savage, who has attacked everybody from the pope down to schoolgirls. I mean, he traffics in some of the most vile conversations. And they are recognizing him with awards.

They are not about conversation. They are about demonizing and marginalizing people who hold traditional moral views.

KELLY: Let me ask you this. How do we get past this, though? Because when -- there was a way for Phil to say this. You know, "I believe in the Bible. I think the Bible objects to homosexuality so I don't believe in that. And, you know, live and let live, but that's my belief." You don't hear GLAAD coming out and, you know, starting fires when people talk like that. But the way he put it -- and even though I agree with you, he didn't especially link homosexuality, bestiality, homosexuality and terrorists, but boy, it was very close. And the argument on the other side is, there is an implicit linkage. And, you know, you heard Jeremy say, I don't want my daughter to be out there reading that thinking, oh, my God, my dad's lifestyle is the same as bestiality?

PERKINS: You have people involved in adultery that are demanding that Phil be fired. Look, the fact is, sexual immorality is sexual immorality whether it is homosexual, whether it's heterosexual relations outside of marriage. And that was the point he made when he quoted scripture and expounded upon it later.

Look, the reality is, the reason the show is popular is because they are real. And they have a set of values that is grounded in scripture which many people across this country still subscribe to. In fact, they long for people who will not be choked back by political correctness but simply speak freely.

And what I think we are seeing, Megyn, is a growing movement, because over the last couple of weeks we have had Christian bakers who have been forced by judges to participate in same sex ceremonies, photographers, the same thing. I think people are tired of the bullying that's taking place by organizations like GLAAD. They don't mind them putting their viewpoint out there. But quit trying to silence those who hold to a natural view of marriage and traditional morality.

KELLY: I understand. Boy, we are a long way from resolving this. That's one thing that's clear. Thank you for being here. I thank Jeremy as well.