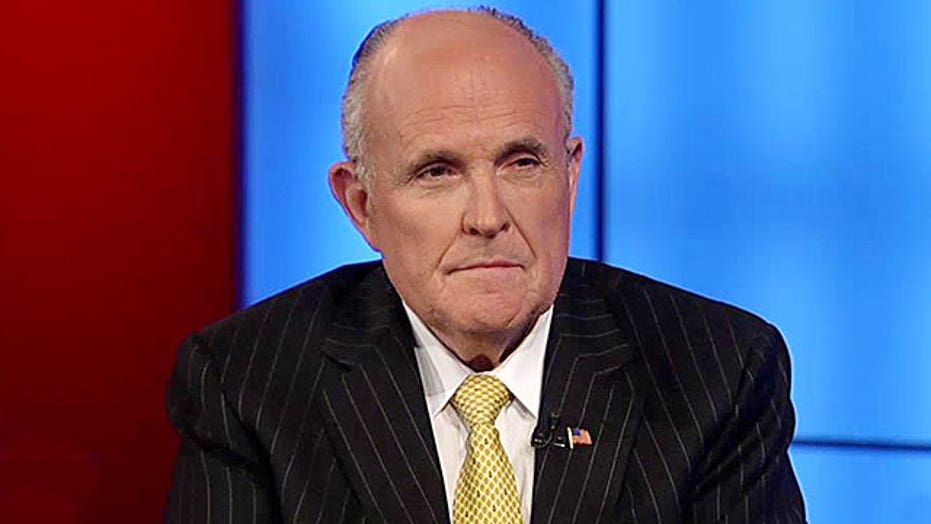 Giuliani on why America is not respected on the world stage

This is a rush transcript from "Hannity," June 2, 2015. This copy may not be in its final form and may be updated.

SEAN HANNITY, HOST: Tonight, President Obama's completely out of touch with reality. Here is but the latest example.

And part of that, I think, is because of the work that we did to reengage the world and say that, We want to work with you as partners, with mutual interests and mutual respect. It's on that basis that we were able to end two wars while still focusing on the very real threat of terrorism.

HANNITY: Pretty unbelievable! Now, the president's statement could not be further from the truth. Here are just some of the foreign policy failures during his time in office. Russian aggression led to the invasion and annexation of Crimea, and of course, Ukraine. ISIS is on the march in Iraq and Syria and continue to capture more territory by the day. Libya collapsed and has become a safe haven now for terrorists.

Israel has all but abandoned -- been abandoned by the president and his fixation with a nuclear deal in Iran. And just take a look at President Obama's latest attempt to try and convince the Israelis that a nuclear deal with the Iranian mullahs is a good thing.

OBAMA: We can, I think, demonstrate -- not based on any hope, but on facts and evidence and analysis -- that the best way to prevent Iran from having a nuclear weapon is a verifiable, tough agreement. A military solution will not fix it, even if the United States participates. It would temporarily slow down an Iranian nuclear program, but it will not eliminate it. What I can say is to the Israeli people I understand your concerns and I understand your fears.

HANNITY: By the way, did I mention the Chinese are pursuing their territorial ambitions? Now, if that's not bad enough, the president also said this yesterday.

HANNITY: Of course, Republicans want dirty air and dirty water and all the other comments that he's made.

Joining us now with reaction, former New York city mayor Rudy Giuliani. So he says he has turned America into the most respected country on earth. He also said he doesn't believe in using divisive politics. And then he said, Obama to Axelrod, I'm the closest thing to a Jewish president the U.S. has ever had!

GIULIANI: ... the first one. I went back and took a look, and in the last 12 months, I've made 23 foreign trips to 16 different countries, including some of the countries that are most deeply involved in this situation.

And I would say without almost contradiction in each one of those countries, I find that America is less respected, completely disregarded in some cases. We know about Israel. I spoke to two high-ranking officials in Saudi Arabia and one in Jordan, who basically said, America with Obama as president, they said, it's out -- that we are out of the equation.  America is now...

GIULIANI: Yes. Exactly. In the words, they now have to put together their own -- which is why they didn't send anybody to his summit. That's respect. Same thing is true, a recent trip to Germany. And then a few months ago in Poland, I was asked by some members of the Polish government if I thought that Obama would defend Poland if Poland were attacked by Putin.

And I said, I can't believe you're asking me that question.

GIULIANI: And they said, Well, we think your president wouldn't use military power, you know, to any extent. Look what he's doing in Iran. I mean, he -- the -- the -- the plan he has makes Iran a nuclear power 10 years from now.

GIULIANI: Now -- now, that assumes that we trust Iran. And just revealed today, either in The Washington Post or The New York Times, that Iran has been enriching uranium all during the last year, while they said they weren't enriching it. Now, they cheated us twice before when we tried to have agreements with them. Why -- is there any reason to believe they're not going to cheat -- this is like -- this is like playing poker with a guy that has cheated you twice, and then you...

GIULIANI: Let me play -- let me play poker with him again.

HANNITY: The number one sponsor of terror, fighting proxy wars...

GIULIANI: Which they're doing right now!

HANNITY: ... in Yemen. The destruction of Israel is not nonnegotiable. And America is the great Satan, and death to America.

GIULIANI: And we're going to trust them not to enrich uranium behind our backs, when they've done it before. They're doing it now during this one-year period!

HANNITY: It's unbelievable. All right, I want to ask you this because we've had this battle over the Patriot Act, Rand Paul -- he's been demonized by many in the party. I want to play a cut from you from Jim Sensenbrenner. He wrote the Patriot Act. He's making the adjustments with the USA protection and surveillance act. And this is what he said the Patriot Act evolved into, which he said is against the law. Listen to this.

HANNITY: Is it fair to say that you suspect that every American's phone has been tapped by our government, in that sense, it was data-mined, conversations?

HANNITY: Is it fair to say that you believe that every American had electronic information that they thought was confidential intercepted by the government?

HANNITY: I am stunned! And what are they doing with this information?

SENSENBRENNER: well, they're storing it in a huge data warehouse that is west of Salt Lake City. And the point that I keep on making is what good has all of this done, aside from being an intrusion of privacy to a scale nobody imagined? There's not been one terrorist strike that has been exposed as a result of the data that has been mine.

HANNITY: Now, I supported the Patriot Act, and I still believe we need a Patriot Act, but we've got to balance 4th Amendment constitutional rights, civil rights, privacy rights. And what he's saying is, is that the government has been breaking the law by data mining, which the Patriot Act specifically prohibited. What is your reaction?

GIULIANI: My reaction is that's his interpretation. It is the fact he's the author, but you know, more than one person sets the intent of Congress...

HANNITY: But the second circuit agreed with him.

GIULIANI: And believe me, there'd be other circuits that would come to a different conclusion about that because the plain language of the statute is not really violated by what the government is doing.

The second thing I would say is, the government has not misused the information. There's no evidence that under either President Bush or President Obama, there's been any misuse by the government.

And I happen to know that the information is helpful. And the government has its hands tied behind its back because it can't defend itself. It can't point out the situations in which that information has been helpful.

HANNITY: You agree it shouldn't be used for any type of domestic prosecution, only for terrorism?

GIULIANI: Never should be used for domestic prosecution.

GIULIANI: Never should be misused. The government has handled it responsibly They're going to put it in the hands of private companies.  And there may be a day that we get a bombing that we don't pick up fast enough because it's going to take a while for the government to get that from the private company.

GIULIANI: And people could die a result of that, and I think Congress is making a mistake here.

HANNITY: OK. Appreciate you being with us. Thank you.