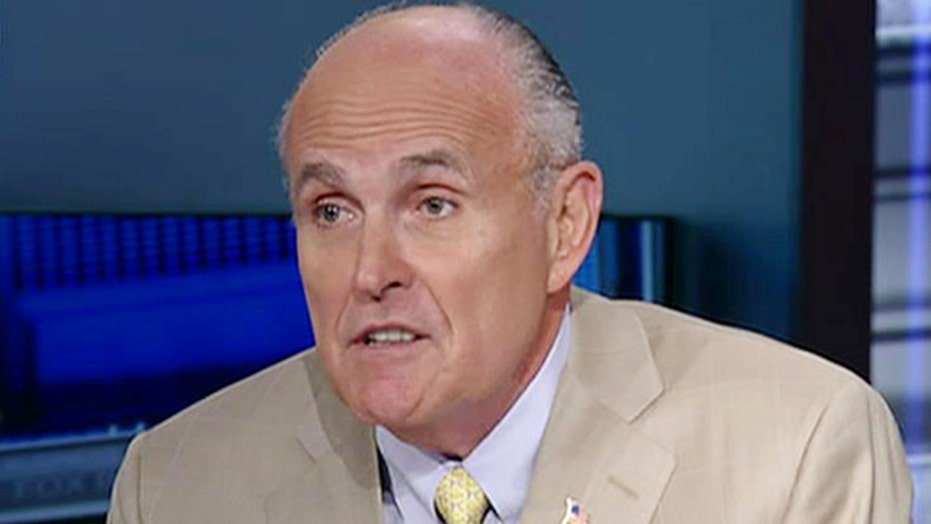 This is a rush transcript from "Your World," June 23, 2015. This copy may not be in its final form and may be updated.

NEIL CAVUTO, HOST: America's hostage policy is about to change. Tomorrow, the White House is reportedly set to announced that it will no longer stop American families from paying ransoms to hostage takers.

That is something that America's mayor, Rudy Giuliani, just told me he -- we shouldn't be broadcasting to anyone, let alone the world.

RUDY GIULIANI, R-FORMER MAYOR OF NEW YORK: I handled kidnappings when I was assistant U.S. attorney, one very famous one.

So, I know what you go through with the family. And, of course, if it were my son or my daughter, I would want to pay the ransom. However, I have to point something out. We don't have many kidnappings in the U.S. since the Lindbergh case, because we don't pay ransom and because we do everything we can to catch the kidnapper.

And the death penalty used to exist for a long time for kidnapping. It still could if the Supreme Court would rule the right way. Mexico pays.  That's the rule in Mexico. You get paid for a kidnapping. They have thousands and thousands of kidnappings.

CAVUTO: So the government turns the other way.

GIULIANI: This is my advice to the government of Mexico City. Don't do it.

CAVUTO: But if a private family, Mayor, says...

GIULIANI: A private family should go right to the FBI. They know how to handle...

CAVUTO: But if they're going nowhere with administration, nowhere going with the FBI...  (CROSSTALK)

CAVUTO: OK. But let's say -- like you said, if it was your son or daughter, God forbid, what -- I think what the administration is saying here, you won't be committing a crime doing this.

GIULIANI: Well, I don't know if it's a crime. Saying that you're doing it and you have this private little agency that does it is a big mistake.

Hey, if you want to make an occasional exception, make it and have plausible deniability. But don't have a rule like this announcement that you can have kidnapping.

GIULIANI: You are going to see -- ISIS takes a look at this and says, hey, great, we just made ourself $5 million, $6 million.

GIULIANI: And then they turn it into making dirty bombs to kill us. So it's -- this is a very a very delicate thing and a very emotional thing.

And if you -- and I have lived through it, so I get it. I understand why the family wants to do it. But if they come to the FBI, what the FBI will do it is, they will turn -- they will make it a ransom payment, but it will be a sting operation and we will catch the guy who did it. And I participated in one of those that was enormously successful.

CAVUTO: Let me ask you, Mayor, about -- I mentioned at the outset Bill de Blasio, the mayor now, he said that Donald Trump was not up to the standards of New Yorkers, I'm paraphrasing here, that he doesn't represent New Yorkers' values

CAVUTO: Now, you heard that. And I know you oppose Donald Trump in this trade...

CAVUTO: Why do you say that?

GIULIANI: Well, first of all, Bill de Blasio is basically a socialist, right? Redistribution of wealth. He calls himself a progressive.

There's nothing progressive about the redistribution of wealth. It was invented by Karl Marx. It goes back to Hegelian philosophy. It failed 20 times. He's a retrogressive. He wants to take a failed economic policy, which failed in New York, by the way, until I became mayor, and he wants to reimpose it on the city.

CAVUTO: Are you worried about what is happening again on the streets of New York?

GIULIANI: Donald Trump -- Donald Trump is the epitome of American success.  The guy who was handed a decent business by his dad who grew it into an empire.

And he did it -- and I know Donald for 25 years. And he did it by hard work. A lot of his public relations -- and people have different impressions of him.

CAVUTO: I think the mayor is saying it's the bravado part, that that is not the New York...

GIULIANI: That's not New York? Did he ever meet Ed Koch?

GIULIANI: And he's a socialist. Did he ever meet Ed Koch? His hero, La Guardia, La Guardia wasn't boisterous? La Guardia was out of his mind? To me, it's just crazy stuff.

CAVUTO: Do you think he's running for president?

GIULIANI: I don't know what he's running for. But he doesn't understand New York City.

And maybe it's because he comes from Boston.

There's a great cartoon of Fiorello La Guardia walking into City Hall. And the minute he walks in, City Hall explodes, because he was a bigger-than- life character. And New Yorkers love bigger-than-life characters.

CAVUTO: But he also read the comics on the radio.

GIULIANI: He read the comics on the radio.

GIULIANI: And Ed Koch walked across the Brooklyn Bridge.

GIULIANI: And I would march in every single parade.

CAVUTO: Yes, you did.

GIULIANI: I would go on the bridge when the taxi drivers wanted to take the bridge, so they couldn't take the bridge. I never let anybody take my streets, take my bridges, the way de Blasio does.

CAVUTO: But there were a lot of critics who wanted to push you off those bridges, too. Right?

GIULIANI: Yes. They never did, though.

GIULIANI: My attitude was, come on, try it. Let's see who can take over.