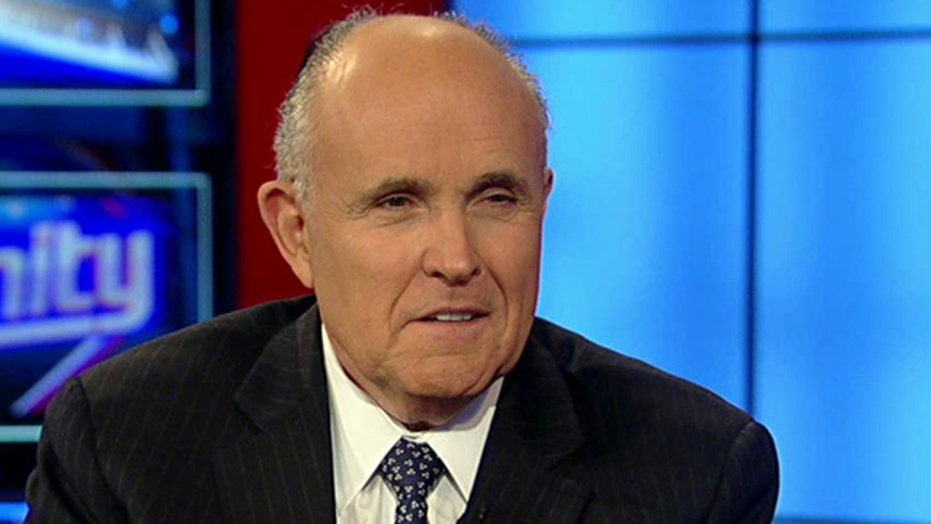 Former NYC mayor on why young people aren't signing up

This is a rush transcript from "Hannity," October 28, 2013. This copy may not be in its final form and may be updated.

SEAN HANNITY, HOST: What happened to, "If you like your plan, you can keep your plan"? Well, now at least one Republican lawmaker is taking action. Wisconsin senator Ron Johnson is going to file legislation this week. It's entitled, quote, "If You Like Your Health Plan You Can Keep It Act," and it would make the administration live up to this important promise.

GIULIANI: Good to see you.

HANNITY: There is an estimate out there -- health care expert Bob Lazuski (ph) actually says there's 19 million Americans that have individual health insurance market. He says 85 percent of them, 16 million, ultimately will lose their coverage.

GIULIANI: ... that are going to lose their coverage when they were promised that nobody, absolutely nobody would lose their coverage. If you liked it, you could keep it, none of this stuff about minimum standards or the federal government is going to tell you what kind of insurance you should have. So this -- I mean, this is a major, major problem. But I mean, the biggest -- the biggest problem of all, even worse than the computer breakdown, which is...

GIULIANI: ... absolute crazy incompetence. But the biggest thing that you can see with some of these statistics are that young people are not signing up for insurance. Mostly so far, to the extent people have been able to get through this computer they've been -- they've been signing up for Medicaid.

GIULIANI: Yes, which is going to just -- this is just going to add to the expense...

GIULIANI: ... because if there are more people on Medicaid, that's a bigger government expense. So the reality is, whatever estimates Obama made of what ObamaCare is going to cost -- multiply it by two, maybe multiply it by three.

HANNITY: Let's go through the main promises of the president. The president said that the website's going to be easy to use. I can play it in a minute, if you like. But he also said the average family will save -- it'll reduce their premiums $2,500 per family per year. He said that repeatedly -- said you can keep your doctor if you like your doctor. You can keep your policy, keep your plan. And by the way, he said the cost would be $900 billion. It's now it's three times that amount.

GIULIANI: Yes, it's going to be more than that. The reality is, every single one of those is wrong. You and I knew it when it passed. I mean, it didn't make any sense. You can't cover 20 million, 30 million, 40 million more people and have it cost less money.

GIULIANI: You know, it's impossible.

HANNITY: And there's still -- the CBO still says there's going to be 30 million uninsured in spite of all that...

GIULIANI: That was always true. This was never a universal health care plan. This -- I don't know exactly what it was, but it was an attempt for Obama to get something through which I think nobody thought about, and of course, we know from Nancy Pelosi nobody read it before they voted for it.

GIULIANI: Now we're finding out it's a total disaster.

HANNITY: Right? Because those were the promises he made.

GIULIANI: And these were really -- after -- this is his -- we don't agree with it, but from his point of view, this is his biggest achievement. This is the thing for which history is going to judge Barack Obama one way or the other. And you would think he would have at least gotten the Web site correct. How hard is that, I mean, to do that correctly?

HANNITY: How do you screw up in 2013, spend that amount of money on a Web site? We had a computer expert with his own company on this program that said he would be embarrassed to take more than a million dollars, and it would be up working and they wouldn't have any problems.

GIULIANI: So I had to face Y2K when I was the mayor, you know, the switchover from 1999 to 2000. Everybody was afraid all the computers were going to go down. People were going to be let out of jails. Trains wouldn't run. We spent a couple hundred million to make sure that that worked. I started getting briefings on that 16 months before. Joe Lhota was in charge of that for me.

HANNITY: The guy who's running for mayor.

GIULIANI: Currently running for mayor. And I would be briefed on it once a month, and then when we got closer, once a week. A couple of times, there were breakdowns, but we fixed them six, seven, eight months in advance because I knew if this failed, I would look like a fool.

HANNITY: Let me ask you this. Ron Fournier works for The National Journal, got ahold of a Democratic senior strategist, Democratic Party, close ties to the White House, says -- the subject line was, "Democratic Party is" -- the F word. And when you look at the rate shock, the cost of this, the Web site failure, people can't keep their plan, what is the political fallout, considering none of what the president promised is true? What's going to happen?

HANNITY: And the rate shock.

GIULIANI: When they start signing up all these people for Medicaid -- I mean, so far, about two thirds go to Medicaid. Less than one third goes to private insurance. It has to flip in order for this thing to be at all affordable. And even then, it's very expensive.

HANNITY: And young -- you know what? A lot of young people want catastrophic insurance. That's all they need.

GIULIANI: Well, how about the...

GIULIANI: Also, since you can insurance for preexisting conditions, so if you're a young person and you're healthy and you're going to go to the doctor three times in 10 years, so you get catastrophic insurance, and something really bad happens, you're taken care of.

HANNITY: Yes. All right, good to see you, Mr. Mayor. Appreciate it.