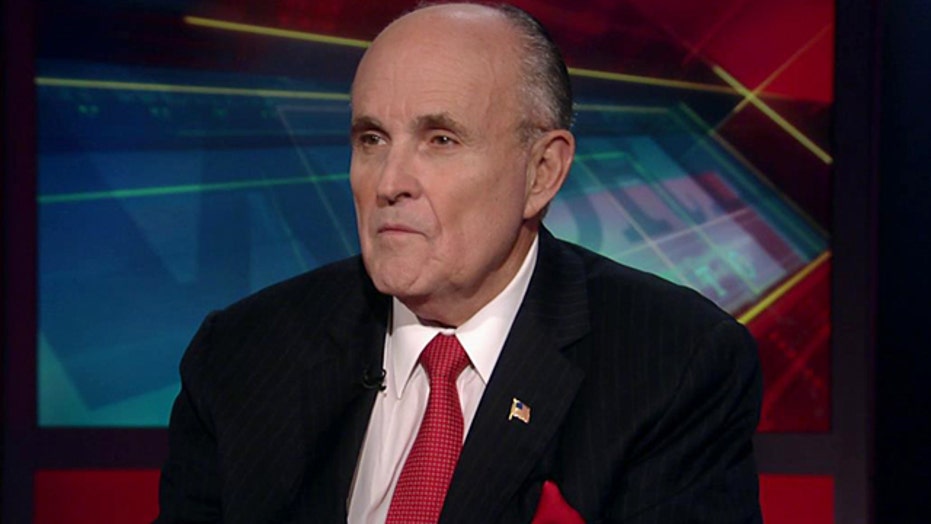 This is a rush transcript from "Your World," May 11, 2015. This copy may not be in its final form and may be updated.

NEIL CAVUTO, HOST: Well, the four suspects in the killings of those two Mississippi police officers set to appear in court this hour. What lies ahead for them, though, remains to be seen.

We're trying to keep an eye on it, seeing why this keeps happening, why so many officers keep dying after a recent wave of police killings not just in Mississippi, but in New York and in Idaho, shootings that do not seem to be getting the same nonstop press coverage.

Why is that, while some controversial police incidents do? Now, I am in no way trying to minimize any of those deaths, just the fact that families are hurting, no matter who is killed.

But former New York City Mayor Rudy Giuliani wants to know, where is the outrage over these officers' deaths?

There does seem to be, at least stepping, in the eyes of the media, Mayor, a sort of a double standard here.

CAVUTO: And it's find to cover the deaths of -- on the other side in other cities, but almost no coverage outside those of cities of officers killed in those cities.

GIULIANI: It's really -- it's outrageous.

They lost their lives because they were out there on the streets trying to protect you and me. There's something very, very special about that. And when they lose their lives, there's a real attack on civilization and law and decency. And...

CAVUTO: Especially when they seem to become targets. Now, we don't know all the details about Mississippi.

GIULIANI: But we do know the one in New York.

CAVUTO: We know the one in New York.

GIULIANI: Ramos and Liu, they were assassinated.

CAVUTO: So, I guess what I'm getting at, do you see the police holding back as a result of this, now -- and we're going to deal with this later in the show -- suits to hold them back, that, all of a sudden, however they went about doing their business, they're being -- their hands are tied?

GIULIANI: You know, I think I know policing as well as anyone, for a lot of reasons, including it was all my life until I became a mayor, four uncles who were police officers. I grew up in a family of police officers.

The average police officer will hold back. That extra special brave police officer? He is going to go forward, no matter what. But like any army or group of police officers or group of employees at a bank, a lot of people are average. And they're going to be saying to themselves, if I make a mistake, look what happens to me, what happened to the poor officer in Ferguson, right?

That officer in Ferguson just did his job. He chased a guy who held up a convenience store and tried to -- tried to -- banged him in the face and tried to take his gun. Had he stayed in that car and not pursued him, he shouldn't be a police officer.

So, that man just did his job, and to a large extent, it looks like his life has been ruined, even though he wasn't even indicted for a crime.  So, that has to enter the mind of the average police officer.

CAVUTO: What do you think when, at the highest level, though, Rudy, you get the attorney general of the United States exploring how the Baltimore police operate?

GIULIANI: Well, I always made my police officers feel and firefighters, I have your back. I'm there for you. If you get into a controversial situation, I'm not walking out just because The New York Times gets angry at me.

I think we have got the opposite going on now in a lot of places, which is, sure, they got the back of the police officer, but it's a stab in the back.

GIULIANI: It's, let's get all outraged before we even know the facts.

Look, Ferguson is a totally false scenario, for one month, month-and- a-half, hands up, never happened, shot in the back,total perjury. The man was charging the car, corroborated by seven witnesses, at least five of whom are African-American, including one man who came forward on his own.

CAVUTO: But what do you to say -- in light of this and in light of these latest policemen killed in Mississippi, that there's more black-on- black crime, there are more officers who have targeted white assailants, but all these numbers get drowned out?

GIULIANI: They're trying to escape some of the hard realities. The thing that brought it home to me was Baltimore, when several of the elected officials, several of whom have been there for like 30 and 40 years, and their political party, the Democratic Party, has been running Baltimore for 40 years, they started saying, it's because of the terrible conditions here.

Well, I really kind of lost my temper on watching that on television.  I said, well, you should resign. If that's the case, then you should resign and turn the city over to somebody who can turn it around, because if I had to go complaining when I was mayor because of the terrible conditions here, The New York Times would have ripped me apart. I got elected to change the terrible conditions.

CAVUTO: Well, The New York Times ripped you apart regardless.

GIULIANI: And I turned Harlem around.

GIULIANI: Well, officers who go too far, I would do what I did when I was a prosecutor and mayor. I put them in jail.

The officer who attacked Abner Louima is in jail for 25 years.

GIULIANI: Officer Livoti is in jail.

I personally oversaw the prosecution for the Knapp Commission of 70 police officers. I consider police officers who act illegally worse than anybody else. But then again, I see the loss of a police life as something worse in a certain way, because it's an attack on all of us.

I'm not going to go out tonight and patrol the streets of New York, protecting you and me and my children and your children, but a bunch of other guys are. And if they lose their lives doing that, that should be a major, major event. The president of the United States should get at least as upset about that as the phony story in Ferguson that got him all upset.

I have read every single piece of that grand jury testimony that has been released. There are seven witnesses who corroborate the police officer.

CAVUTO: No, no, you're right about that. And many have corroborated him.

CAVUTO: In the case of Baltimore, do you think that that even if these officers were involved in screwing up procedure and didn't, is it a leap in your mind to charge a couple of them with second-degree murder?

First to make, to make it a racial incident is absurd, since I think three of the police officers and the primary defendant is African-American.

I don't know. There seems to be some degree of overcharging involved, but they may be completely innocent. They may be guilty. I don't know.  But it seems to me that the case got prejudged. Here's what I do know.  When a trial begins, they will be presumed innocent. And I do think it needs a change of venue. It would seem to me that that's a case...

CAVUTO: Get it out of Baltimore.

GIULIANI: Oh, come on, how could they possibly get a fair trial in Baltimore, when a jury would be worried that, should we come back with an acquittal, the same thing that happened in Baltimore a couple weeks ago or a week ago could happen again?

CAVUTO: But, as you know, Mayor, whether it's in Baltimore or at another locale, let's say the officer or officers are exonerated and let off. Then there's fears of new riots, as was the case with the Rodney King riots. Remember them?

GIULIANI: We don't convict people because we're afraid of riots.

CAVUTO: Understood. But how would you as mayor or leader in these various areas...

CAVUTO: What would you do?

CAVUTO: Where would you draw the line, someone picking up anything or someone like getting right in your face?

GIULIANI: Right in your face is OK. If it gets threatening, you get arrested.

GIULIANI: Assault and battery. Battery is hitting. Assault is threatening.

CAVUTO: So, you would round up those who threatened or cursed at cops?

GIULIANI: It depends that -- it depends or -- police officers have to use some discretion there.

CAVUTO: What about those who throw red paint at an officer or a police chief?

GIULIANI: Arrested immediately. That's assault and battery. And you go to jail. You go to jail for two or three years for that, for throwing paint at somebody -- first of all, you could blind somebody with paint.

GIULIANI: You throw a rock, you can kill somebody with a rock.

To have, like they had in Baltimore, like we used to have in New York before I became mayor, with the two riots in Crown Heights and Washington Heights, cooling-off periods, where hundreds of cars were burned and stores looted, this is absurd. You stop it right away.

CAVUTO: Do you think this city -- and I know we have to go. You're pressed for time. Crime is revisiting us? We had two Central Park incidents over the weekend, more incidents reported in Times Square.

GIULIANI: I have great confidence in our police.

CAVUTO: But are you worried?

CAVUTO: And why do you think it's happening now?

I was more worried when the mayor's rhetoric was anti-police back around Christmastime.

GIULIANI: I see in Mayor de Blasio a little bit better rhetoric now, a little bit more support for the police. I don't see the same anger. So maybe I'm feeling a little better about it.

But I want to see a year go by before I can give you a real assessment of that.