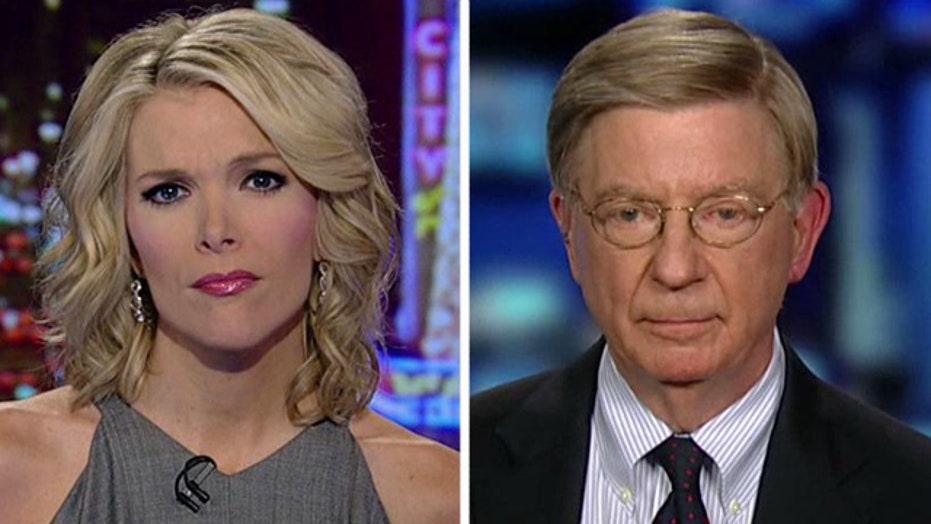 George Will on 'cynical lawlessness' of ObamaCare delay

This is a rush transcript from "The Kelly File," November 22, 2013. This copy may not be in its final form and may be updated.

MEGYN KELLY, HOST: For weeks this administration has gotten hammered for the millions of insurance cancellation notices sent out to the American people. So far our tally puts it at 5.5 million people who have received notice that their policies are being canceled. And today we get word that the administration is changing the game now for next year. Instead of people signing up for year two coverage next October, learning what they can get and cannot get and how much it will cost them right before the midterm elections, open enrollment is now suddenly being pushed back a month until after the midterm elections. So people won't exactly know what they can and cannot get and how much it will cost them until after they go and vote on whether certain House members and Senate members are going to keep their jobs.

Now the administration insists that politics has nothing to do with -- what? Politics, no! Critics are not exactly as sure. And this news comes just one day after Senate Democrats undid basically more than 200 years of precedent in a power grab that takes away an important check on how much power a president has.

Joining us now for the first time on "The Kelly File," George Will, a syndicated columnist and a FoxNews contributor. George, it's great to have you on the program.

GEORGE WILL, FOX NEWS CONTRIBUTOR: Glad to be with you.

KELLY: And so, I mean, the notion of, you know, day after day, yet another executive declaration that will change a law that was rammed through without the 60 votes need in the Senate the first time around and now we're getting rid of any 60 votes needed to block judges and now the president on yet another day declares he's changing things all by his lonesome yet again, has critics asking whether he is a president or a king. Your thoughts.

WILL: Well, listen, there's a kind of lawlessness here. And it's cynical lawlessness. You know, Lily Tomlin the comedian used to portray a character she called the bag lady who said, no matter how cynical you get, you just can't keep up. And I think Americans are beginning to feel that way.

This looks like a clever move. Now, it's all right in politics to be clever, but you don't want to look like you're trying to be clever because that looks tricky and sneaky. And, in fact, as the president continues to waive this and suspend that and exercise what he calls enforcement discretion, the American people are beginning to feel that the law is in constant flux. And if the law is in constant flux like by the way the rules of the Senate, there is no law just as there are no more rules in the Senate anymore.

KELLY: Is it something that the people are going to fall for? Because I mean, I'm picturing this time next year, I guess, it will be right before the November elections next year. And aren't the Republicans going to come out and say, hey, guess what, when they do unveil the prices for the policies that are available to you under ObamaCare in a week, guess what they're going to be. There was a reason they pushed it back until after the midterm elections.

But, Megyn, the ObamaCare is collapsing under the weight of accumulated cleverness. It was passed by clever parliamentary maneuvers, passed by cleverness in the cornhusker kickback and the Gatorade and the Louisiana Purchase and all the other deals. It is constructed in huge complexity because it's supposed to be a clever way of disguising the fact that this whole scheme is a large income transfer and redistribution mechanism as much as it is a health care plan. So, the cleverness compounding cleverness compounding cleverness, and it's beginning to look not a bit clever.

KELLY: Can you put in perspective what we are seeing right now in this country? I mean, ObamaCare, you know, push through with no Republican support. It's never had the support of the majority of the American people. Then President Obama with his magic wand extending the year for the employer mandate and then now changing the date for, you know, enrollment, and then yesterday Harry Reid doing something he said he'd never do, that would be the darkest day of the Senate, eliminating minority rights for federal judges and beyond in the Senate which was always meant to be the place where tempers cooled and the minority rights were protected. I mean, what is going on right now?

WILL: What is going on is the fulfillment of a progressive dream now 100 years old. A hundred years ago, we were in the first year of the first progressive Democratic President Woodrow Wilson. He thought, he was the first president every to criticize the American founding which he did not do at the margins, he criticized at root and branch. He said the very separation of powers is inappropriate for the modern age because America to be governed needs to have more power concentrated in Washington, more and more Washington power concentrated in the executive branch, and more and more executive branch power concentrated in executive agencies immunized from control or even supervision and oversight by Congress.

Conservatives had a robust and I think healthy suspicion of executive power until they had the one-fourth experience of Ronald Reagan, the president of their own.

WILL: At that point, they began to lose some of their suspicion of executive power which I hope they are now reacquiring.

KELLY: Certainly may be.

George Will, great to see you. Thank you, sir.

WILL: Glad to be with you.