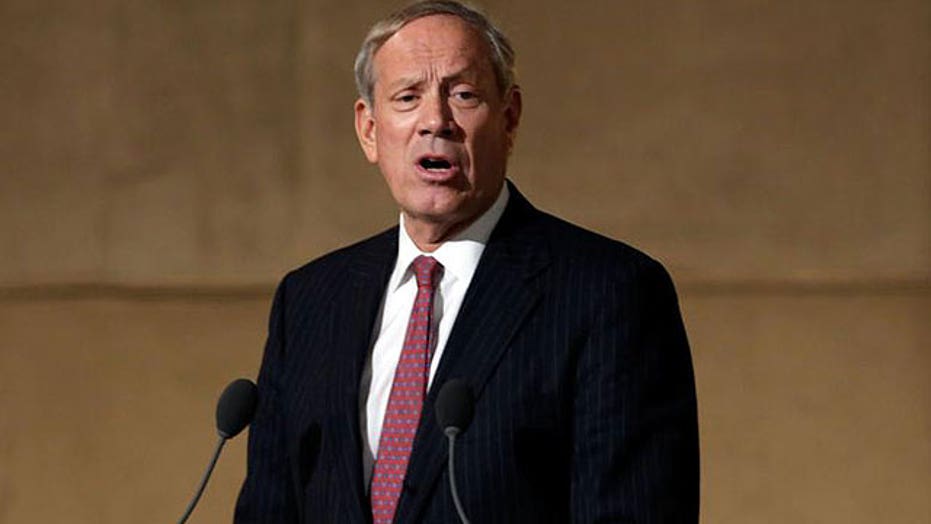 Charles Krauthammer weighs in on the 19 Republican presidential hopefuls

O'REILLY: "Impact Segment" tonight, former New York governor, George Pataki announcing today he's running for President. That makes 19 possible contenders -- you can hardly get them on the screen -- all want to run against Hillary Clinton.

Rejoining us from Washington, Charles Krauthammer. So many politicians -- so much time -- is that a good thing.

KRAUTHAMMER: Well, you know, if you're Fox, we're holding the first debate, we're going to have a hire a bouncer to police the state. There a lot of people up there.

And you know, in one way it's a good thing. It shows how many Republicans think that the Democrats have a really weak vulnerable candidate. This is a year when they could do it. So, everybody thinks, you know, I can be president.

The downside, the obvious is how do you get the more serious candidates to get the face time and to interact with each other and to argue, which is what you want. Now, you know, Fox is facing a hard decision. It's doing the first debate. And it's decided it will choose the top ten. And as you know, CNN is doing the second debate. They have decided to do back-to-back debates, top 10 for one session and then the others, which I think is a rather odd way to do it.

I think if you are going to do two panels you have got to do it randomly chosen. You don't want to be on the undercard. That's the way it's going to be done.

There is no really good answer here other than to say that you have got to hope that the field will winnow itself quickly which is -- I'm not sure how likely it is.

O'REILLY: I want to point out to everybody watching tonight that there is no downside to running for president. You get your name out there and become more well-known. You can get lecture fees that go up. You can write a book. You can get attention if you have nothing to do.

There is really no downside to it. So then you have all of these people, and we assume they are all sincere wanting to improve their country.

But you are right. There is no way to cut through that clutter. People already have a headache and it's a year and a half out to the election. They are already going oh -- how many are there going to be? There could be more. Kasich could get in and a whole bunch of other people could get in.

KRAUTHAMMER: Well, you know, I hear that you have been considering as well.

O'REILLY: No, no. How do you know? I think you are a spooky guy, Krauthammer. I was just going to say people say to me why doesn't Krauthammer run for president? And I say well he is not a citizen. He's not an American citizen.

KRAUTHAMMER: You know, you are spreading lies again, Bill.

I know. It's because I spent a few years in Canada I have got that taint for the rest of my life. Here is my position on running. If nominated I will not run. But if elected I will serve. I'm just lazy.

O'REILLY: Ok. But you would make a good president, I think. But to do it, you have to put yourself in a position and I think that guys like you and I -- you and me right now, we influence the country in ways that we could never influence it being politicians. Last word?

KRAUTHAMMER: I don't know about influence, but I'm lazy and the only thing I would run for the presidency for is that airplane. I would let the vice president govern. I would just fly around everywhere.

O'REILLY: Well, The Factor has gotten Jessica's Law to protect children pass in 45 out of 50 states. I could never have done that had I been a politician. That's what I always tell people.

KRAUTHAMMER: Well, as president, you might have, but no, I commend you on that and a few of your other causes, including helping the wounded warriors. I think you've done a great job on that.