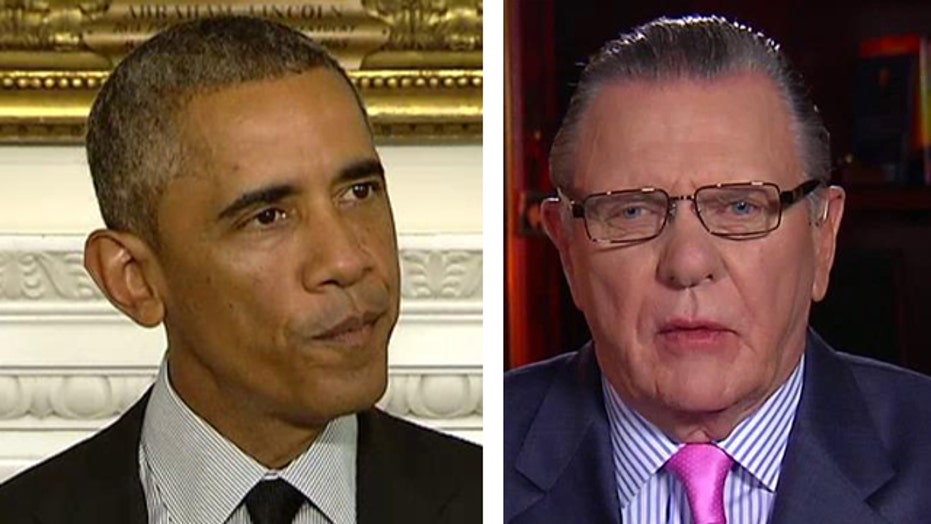 Why the mission may be impossible without ground troops

This is a rush transcript from "The Kelly File," September 18, 2014. This copy may not be in its final form and may be updated.

MEGYN KELLY, HOST: General Jack Keane is chairman of the Institute for the Study of War, and former army vice chief of staff and he joins me now. Good to see you, General. Let me just start with what your reaction is now to what we heard from General Mattis and what we've seen from those four other generals coming out and saying the president has mis-stepped here.

GENERAL JACK KEANE, FORMER ARMY VICE CHIEF OF STAFF: Well, I share their views. I mean, we listened to the president's speech last Wednesday, defined an end state, which I think everybody agreed with defeat and destroy and he defined a general framework which seemed to satisfy most of us in our concerns. But then since the last week when all the details came out about what is the actual implementation plans, we have fundamental concerns.

First, the air campaign is critical, but it won't be decisive. But it's very important. Why aren't we bombing Syria now? It's seven days later. Those targets are exposed. Support infrastructure. Training areas. Supply bases for troops and equipment. Command and control. The longer we wait, Megyn, the more opportunity we have for ISIS to protect and conceal those targets.

KELLY: Right. And there are reports saying that they're doing exactly that, that they're reportedly moving into the inner cities. And they know that they've got time to abandon their posts so they can get to a spot that we are unlikely to bomb from the air.

KEANE: The truth be known -- and I wish I had said it the night that you asked me to comment on the president's speech, but I didn't think about it until I was going home in the car -- and the fact of the matter is he should have been bombing that night and he should have been announcing that campaign that night. That would have taken them by surprise, because I'm convinced that one of ISIS' plan assumptions, given the president did not cross the red line to do air strikes in Syria a year ago, they believed they would not strike them in Syria. That's why they bunched up so much stuff in Syria.

The second issue really, Megyn -- this is what the generals are talking about, this is what General Dempsey is nuanced about in his comments and General Odierno, you know, carefully parsed his words in what he was saying. And certainly General Mattis and others being retired can speak more openly. The issue is the ground campaign is what will destroy and defeat ISIS. But we got a weak hand on the ground campaign. Weak in Syria with the free Syrian army needs to be armed, equipped and trained and we've been refusing to do that for three years.  Now we're going to do it, but we're not going to do it robustly. And in Iraq we have an unproven ground team in the Iraqi army, the Peshmerga and the Sunnis. They've never worked together. Not only that, but they've had problems fighting ISIS.

So what General Dempsey and General Austin at Central Command have been trying to do and what they've been presenting to the president knowing we have a weak hand on the ground, they want to strengthen that hand to have success, increase it. So what does that mean? They want advisers and air ground controllers down with the fighting units. That clearly is boots and troops on the ground.

KEANE: They want JSOC special operation forces, direct action teams to take down the ISIS leadership kinetically. That means combat forces but limited to do that. We did this every night in Iraq and every night in Afghanistan.

And believe me, when you go after these leaders, things begin to change rather dramatically on the battlefield below them.

KELLY: All right. Let me -- let me ask you this because Nancy Pelosi was asked about this today. And what she said was, and I quote, "Been there, done that," when it comes to combat troops and we're not doing it."  She's pointing to the Iraq war and that situation, the justification were not sending any ground combat troops of Americans there now.

KEANE: Well, that's a misunderstanding of the facts and quite an absurdity in that statement. By the end of 2008, in the beginning of 2009, President Bush's surge strategy led by General Petraeus and General Odierno, now the chief of staff of the Army, defeated the al Qaeda in Iraq.  I saw the transmission because I was advising Petraeus on the ground in Iraq. They showed me the transmissions from al Qaeda that they were intercepting. They said we are defeated, don't send any more foreign fighters.

KEANE: So, we know how to deal with this enemy in that category. What happened to us -- and I don't want to go back and, you know, replay all the mistakes -- but the fact is we didn't leave a force there and we're paying a huge price for it.

KEANE: -- for not leaving something to help the Iraqis.

KELLY: It's extraordinary to see all these generals come out, the ones who are working for the administration now saying as strongly as they can given their current positions that they are disagreeing with the commander in chief's strategy here. Speak if you can to the president's relationship with the military right now.

KEANE: The frustration level in the Pentagon among the military and in the central command headquarters who was overseeing the war with the president in the White House is as high as it has ever been. But this president has overruled our commanders time and time again from 2009 to the present, Megyn. And it's been very frustrating for them. McChrystal and Petraeus wanted 40,000 troops to go into Afghanistan as part of the surge.  The president gave them 25 percent less, 30,000. They wanted the force to stay there for a couple years. The president pulled it out after 11 months over the objections of General Petraeus.

General Austin who is now central command commander when he was running the war in Iraq at the end of the war made a recommendation for 24,000 troops to stay in Iraq. The end result was nothing. General Dunford, the Marine Corps commander of Afghanistan and the Central Command commander now General Austin made a recommendation this year to the president to keep a residual force in Afghanistan. He has rejected that and said no. And now he's rejecting their recommendations to win this war with ISIS. And also he's rejecting what they absolutely need and what is the noise you heard out of General Dempsey, is that if this weak hand fails, we need U.S. combat forces to come in and take over.

KEANE: And that is still not an option.

KELLY: Uh-huh. And the question remains then whether the commander-in-chief is in effect setting our own troops up to fail. We're going to take that up a little later.

General Keane, thank you so much for being here tonight.

KEANE: Glad to be here as always, Megyn.