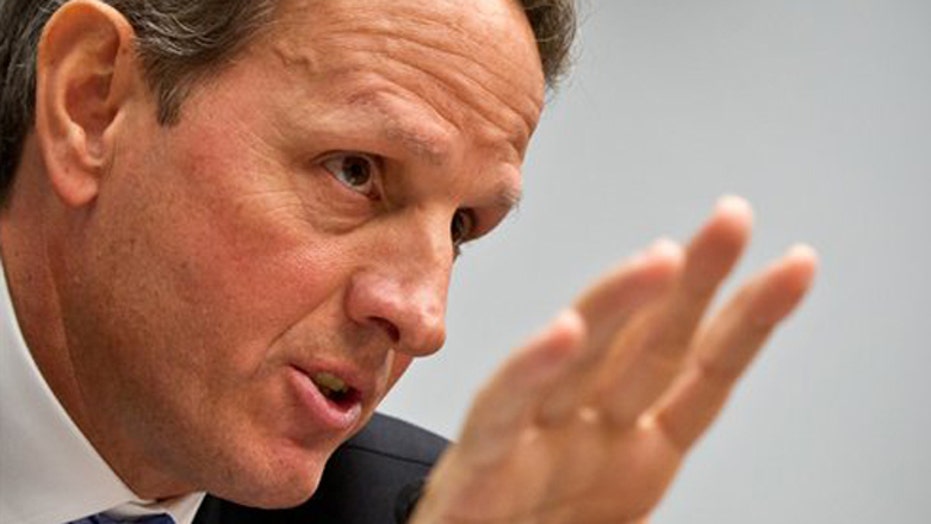 This is a rush transcript from "The Kelly File," May 12, 2014. This copy may not be in its final form and may be updated.

MEGYN KELLY, HOST: Breaking tonight, did the White House pressure a cabinet secretary to lie to the American people? New fallout from revelations in a tall all book by a former White House insider and the new questions being raised about this administration's credibility.

KELLY: Welcome to "The Kelly File," everyone, I'm Megyn Kelly. In a book that is touched off a growing controversy, former Treasury Secretary Timothy Geithner writes about an exchange he had with the top member of President Obama's political team just before Mr. Geithner was to appear on a round of Sunday talk shows to address the American public. Mr. Geithner saying, a top presidential adviser Dan Pfeiffer wanted him to say that Social Security is not a driver of the nation's deficits, even though Mr. Geithner knew that was not true. Administration talking points designed to mislead. Sound familiar?

Joining me now, Fox News judicial analyst Judge Andrew Napolitano who's been tracking and writing on issues of accountability and credibility with this administration. So, he recounted very clearly and said it wasn't true and he pushed back and said, you know, it's not true and he refused to do it. Now, Jay Carney comes out and says, he's misremembering that. Basically says, it never happened. So, are we to believe Jay Carney who we know is misrepresented things to us repeatedly or Tim Geithner who said, they pushed me to say one thing I refuse to say it.

JUDGE ANDREW NAPOLITANO, FOX NEWS JUDICIAL ANALYST: It's hard to believe, Megyn, that Tim Geithner misrepresented it or mis-remembered it because he re-stated it in such detail. He even used the weird colloquialism that Dan Pfeiffer, the deputy White House chief of staff who said to him, we need you to say this, used. Now, I've never heard this phrase before I read the review of the book over the weekend -- adog whistle to the left. That's how he described this.

KELLY: Explain to the audience what Pfeiffer was trying to tell Mr. Geithner?

NAPOLITANO: Pfeiffer was trying to get the treasury secretary to say on one of his earliest appearances on the Sunday talk shows, treasury secretary for a couple of weeks, that Social Security which pays out tens of millions more than it takes in was not adding to the deficit. Now, you can't pay out more than you're taking in --

NAPOLITANO: Geithner said I'm not going to do it. And Pfeiffer said, you have to do it. It will be a dog whistle to the left. Meaning, it will send a signal to our left wing base that we're still with them, a signal in the form of a lie. Now this could not have come out at the worst time for this administration.

KELLY: So now, Mr. Geithner testifies in his book that he refused to do it, however, unless you have any doubt about what the democratic talking points were on this issue, listen to who would do it.

SEN. CHUCK SCHUMER, D-N.Y., "MORNING JOE"/MSNBC, NOV. 9, 2012: I think on Social Security, you'll find more resistance for one reason, it's not part of the deficit.

SEN. BERNIE SANDERS, I-VT., "ED SHOW"/MSNBC, NOV. 8, 2012 : We're not going to cut Social Security, which by the way, as Harry Reid just reminded us, has nothing to do with the deficit.

KELLY: Right? So, they got the memo.

NAPOLITANO: Those are great gets. They obviously got the memo and they didn't have the sense of integrity or fear of lying that Tim Geithner had.

KELLY: What does it matter? You know, this White House officials come, they tell a guy to spin it this way, you're going on Sunday talk shows.

NAPOLITANO: The government can remain silent on a matter of national security. Like we're about to take down Usama bin Laden next week, we're not going to say anything. You expect the government to remain silent on something like that. But when the government actively, aggressively lies and deceives on something the American public has the right to know, FDR promised it would be your money, we would be giving you back your money, it wouldn't go into the red and now it's in the red. Not to criticize the effort to be asked with the American people about how their tax dollars have been spent, the administration has a moral obligation to do that.

This administration has been lying, we now know from day one and now with Benghazi, with General Clapper lying about the NSA -- you're going to have Mike Rodgers on in a few minutes, we'll have to ask him about that --they are really, really in the dog house when it comes to the credibility that they have lost with the American public.

KELLY: Sounding the dog whistles. Judge, good to see you.