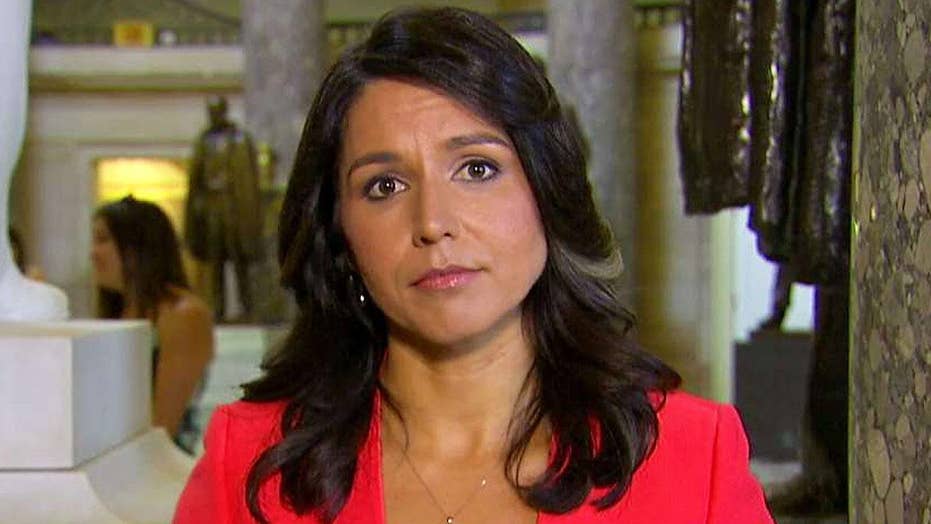 Rep. Tulsi Gabbard reacts to attack on congressional baseball team and the bravery of the Capitol Hill police

This is a rush transcript from "Your World," June 14, 2017. This copy may not be in its final form and may be updated.

Congresswoman, good to have you.

GABBARD: Well, I would like to commend the bravery and the courage and the selflessness of the Capitol Police who acted selflessly today and every day.

And I also want to extend the aloha and condolences of the people of Hawaii towards the victims of this shooting and their families who have gone through such a rough day here today.

CAVUTO: Do you think that we have to reassess? You know, I know there's Capitol Hill police protection for you and your colleagues when you're on the Hill, for example, in your Capitol Hill offices or in the Capitol itself, but not when you leave, outside of the leadership.

People are weighing back and forth whether that should change. Any thoughts?

GABBARD: Oh, look, you know, there's security protocols that are in place, to the best of their ability, to be able to make sure, not only members, but people who are here in the Capitol are secure from anyone who might try to conduct an attack.

But I think it's actually important, Neil, to talk about the root cause of this kind of violence, when you look at the hyper-partisanship that exists both here in Washington and across the country, coming from both sides of the aisle, people who are demonizing the other side just for disagreeing with them politically, you end up with a situation where that escalates and can escalate into violence like this.

So, when I say aloha to you, Neil, aloha in Hawaii is not just a word that we say to tourists who come to our state. It's a word that actually means a deep respect and deep love. And that's what I call on both our leaders here in Washington and people all across the country to remember, that we're all in this together, and that we need to have this deep respect for each other, whether we disagree politically, whether we come from a different place, whether we have a different religion or race, and actually know we can respect each other, even while we disagree and disagree strongly on things.

And that's what we need to get back to. That's where we need to go to be able to prevent these types of tragedies from occurring again in the future.

CAVUTO: But we have all of these town hall meetings where, given the fact that the Republicans are in power, that they're facing this onslaught of very nasty constituents, largely constituents, who are angry and letting it be known.

And it gets pretty heated. And then we have an environment where, in New York, as I'm sure you're aware, the Shakespeare festival, in which the lead character was a Donald Trump character, and they assassinate the guy, and a comedian who carries the head of the president of the United States.

GABBARD: I think every American has a duty.

Yes, Congress has a duty. But every American has a duty again to recognize that we all have a role to play in this democracy in this country and making it so that our discourse is conducted in a way that actually is respectful, that allows for heated debate and heated disagreement perhaps, but that we're all in this together, and that, if you respect each other, if you share this aloha, whether you're a member of Congress or you're a member in a community who is concerned about one issue or another, that's what we need to do for the good of our country and for future generations to come.

And that's the most important thing that I hope people are thinking about right now, is how can each of us in our own way step up to the plate to be respectful, to show that love and aloha and respect to someone, whether they may be like you or agree with you or not. And let's elevate those conversations, so they're actually working for the good of the people and our planet.

CAVUTO: But I always see -- and you and have I chatted about this before, Congresswoman -- that each party seems controlled by its respective base, a passionate base, that doesn't like when you reach outside.

And I think you have experienced this yourself as someone who has tried to work with Republicans or someone who has a different view on war, what have you, and there's all hell to pay for that. So, I have seen the reverse as well.

GABBARD: Well, Neil, I believe that failure is not an option.

And I do believe. And, yes, there are guilty parties on both sides of the aisle. But this, in a moment of unfortunate tragedy and pain and difficulty, is that opportunity for us, as Americans, for leaders in this country to rise up, to set the example, to set that tone of dialogue and conversation.

There's nothing wrong with being passionate about an issue. We're all passionate about different issues. And we all have got different ideas about how to tackle the challenges that are facing this country. Whether you're a member of Congress or you're a teacher at home, or you work in the health care field, whatever issues are important to you, the most critical thing is that we recognize that we have to be able to debate and have these conversations about finding solutions to these issues, actually working together, and not demonizing each other, and not drawing those lines and literally saying you're my enemy because I disagree with you, or because you disagree with me, or because you have a different religion or race, because it's when that happens that we see unfortunate tragedies like today occur.

CAVUTO: All right, I want to thank you very much, Congresswoman, for taking the time. Thank you.