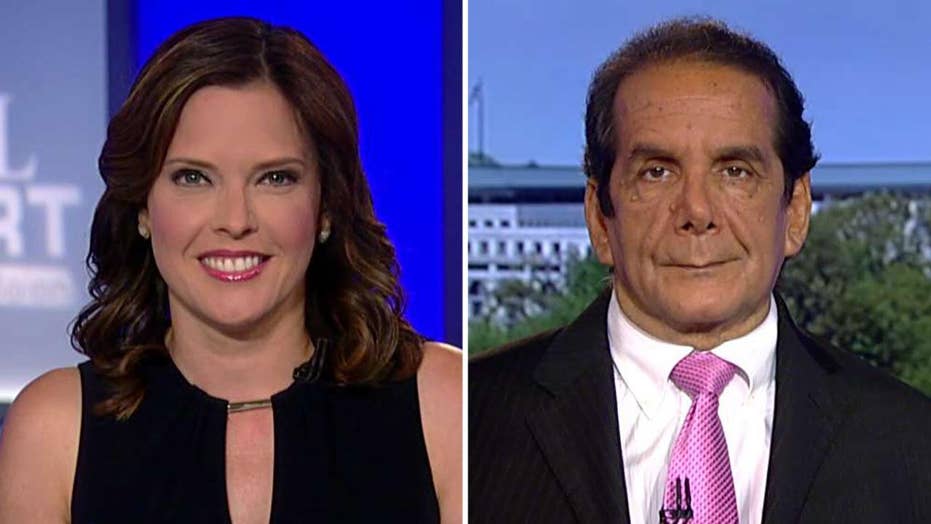 This is a rush transcript from "Special Report with Bret Baier," June 1, 2017. This copy may not be in its final form and may be updated.

PRESIDENT DONALD TRUMP: It would be wonderful, as we were discussing just a little while ago, if NATO and our country could get along with Russia. Right now we are not getting along with Russia at all. We may be at an all-time low in terms of relationship with Russia. This has built for a long period of time. But we're going to see what happens.

UNIDENTIFIED REPORTER: A yes or no answer, does President Trump believe that the Russian government interfered in the 2016 elections?

SEAN SPICER, WHITE HOUSE PRESS SECRETARY: I have not sat down and talked to him about that specific thing. Obviously we've been dealing with a lot of other issues today. I'd be glad to touch base.

BRET BAIER, ANCHOR: That got a few headlines today, that answer about whether Russia interfered in the election at all. This as Russia has threatened U.S. aircraft after the shoot-down of the Syrian fighter jet in Syria.

UNIDENTIFIED REPORTER: Mr. Secretary, what is your response to Russia's latest tactics in Syria?

UNIDENTIFIED MALE: Are you confident that U.S. forces won't be shot down?

GEN. JOSEPH DUNFORD, JOINT CHIEFS CHAIRMAN: I am confident that we are still communicating between our operations center and the Russian Federal operation center. And I'm also confident that our forces have the capability to take care of themselves.

BAIER: The conventional wisdom in U.S. forces is that it's bluster from the Russians as we've seen before, but it's still a tense situation over Syria. We're back with the panel. Michael, thoughts?

MICHAEL CROWLEY: It's a very dangerous situation. It's ironic, Bret, because when Donald Trump came into office, at least foreign policy hawks in Washington were worried he was going to cut a deal with Vladimir Putin that would be too soft, that would give away the store to Russia. Now we have this environment where tensions are actually escalating and we may be stumbling into an unwanted confrontation with Russia, partly because I think the Trump administration is under a lot of pressure right now not to be seen to be reaching out too much.

Actually I've noticed no communication that I am aware of between Rex Tillerson and his counterpart, certainly no phone call between Trump and Vladimir Putin since the infamous day in the Oval Office. And meanwhile, you're having these close calls, as I think Jennifer Griffin explained in an earlier segment, in eastern Europe, the Baltics. NATO is doing big military exercises now, essentially simulating war between NATO and Russia. Russia is going to have a major military exercise in Belarus this fall. A lot of opportunity for miscalculations, and the big question is Trump is likely to see Vladimir Putin at the G-20 summit next month. What's going to happen there, that will be a potentially turning point.

MERCEDES SCHLAPP: But I think it shows the Trump administration's leadership in dealing with Russia -- Russia for too long has been getting away in the control situation in terms of Syria with President Assad. But I think for the most part what you're seeing with this administration is they are saying we're sending a warning. You basically -- they warned the pilot several times, do not get near our forces that are focusing on counter ISIS operations, and we're not going to tolerate that.

BAIER: The reason I say it's bluster likely is because most of the jets flying east of the Euphrates, they are talking west of the Euphrates, number one. Number two, they're looking at the Turkish situation where the Turks shot down a Russian fighter jet and then a couple weeks later, Russia and Turkey were A-OK.

CHARLES KRAUTHAMMER: And yet another example when we did the tomahawk strike on the airbase, the Russians said the same thing, we are ending cooperation. We are going to have a free-for-all up there in the skies. And it actually didn't happen. The cooperation continued.

Nonetheless I think we're headed into a much more dangerous period, and the reason is that the ISIS phase of the Syrian civil war is going to end soon. In other words ISIS going to be dealt with. They are losing Mosul, they are being surrounded now in Raqqa. If and when that happens, and it could be within six months or a year, then what is left on the ground is this Iran, Russia, Hezbollah, Assad coalition on the one side and then the Saudis, the Egyptians, the Jordanians, the forces, the rebels on the ground and us on the other side. Then there is no third-party that we can hit together. It's us and them.

And the Iranians and the Russians are looking at a prize, winning Syria, keeping Syria, the Russians being the dominant great power in the region. Putin hungers to recover great power status. And I think he's willing to risk more than we think. Not now. I think it's early. You not going to go shooting down our airplanes. But this is going to be, with ISIS eliminated, it's going to be even more dangerous.

BAIER: Surprised to hear the Ukrainian president with his praise of President Trump and also hearing the talk of sanctions.

KRAUTHAMMER: That's very encouraging because everybody assumed, in these hearings what we are getting, was the Trump campaign negotiating in advance the giving up of sanctions? There's no indication of that. There's not caving in on the Russians. Perhaps Putin is pretty disappointed in his old pal, new pal, Trump, and that's one of the reasons that he's taken a really tough line.

BAIER: I want to turn real quickly to the aftermath of the death of Otto Warmbier. The president said today it should never have happened, total disgrace, should have been brought home sooner. Is there fallout here that potentially is another tension situation with North Korea?

CROWLEY: Absolutely. It just increases the pressure. I think it galvanizes public opinion. Actually North Korea is a problem that foreign policy insiders kind of obsess about, but I think a lot of Americans feel like it's not really a kitchen table issue for them. But when you have a 20-something American college student who is paraded out and sobbing on camera, sent back to his family in a coma, I think that brings North Korea home for people in a new way. But Bret, there remains the fact there are no good options on North Korea. So Donald Trump may be invigorated to crack down and do something tough, but what is that? What is the answer? There is no good option, and I don't think we have any more clarity which of the bad options Trump is ready to choose.

BAIER: And obviously he doesn't think China has done enough. He said they have tried but it hasn't happened yet, today in a tweet. Panel, thank you.