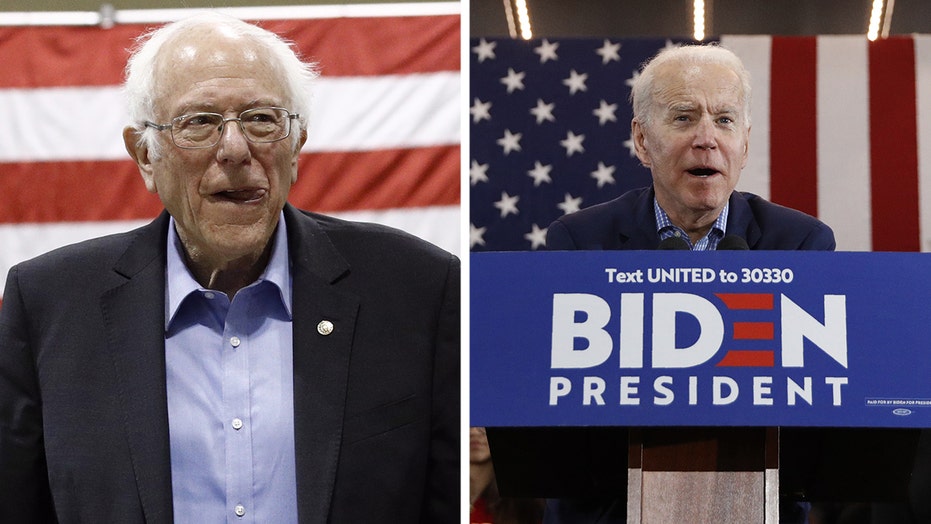 Plus, 'Special Report' All-Stars place their bets in Candidate Casino and pick their winners and losers of the week.

This is a rush transcript from "Special Report with Bret Baier," March 6, 2020. This copy may not be in its final form and may be updated.

JOE BIDEN, DEMOCRATIC PRESIDENTIAL CANDIDATE: I'm the guy that helped bail out the automobile industry. What did you do, old buddy? This is a guy who voted against the Brady Bill five times for background checks on people. And I welcome the competition, Bernie. Let's talk about your votes. Let's talk about my votes. Let's see what the American people say.

BRET BAIER, ANCHOR: Well, that looks like it's going to happen, man to man. March 10th, we have a series of states, the biggest of them Michigan, 125-pledged delegates there. You see the other states voting on March 10th. The delegate tracker, and this is what it all comes down to is math. Joe Biden at 652, Bernie Sanders 573, 1,991 needed to win the nomination.

Let's bring in our panel: Byron York, chief political correspondent for the Washington Examiner; Mollie Hemingway, senior editor at The Federalist, and Charles Lane, opinion writer for The Washington Post.

This is the race, a lot of people thought it was going to come down to this, and here we are.

BRYON YORK, WASHINGTON EXAMINER: What we saw today is this bickering between these two senators. It's basically two old senators yelling at each other about the votes they took, some of which were a million years ago. And the contrast between that and what you saw in the town hall with you and Martha last night with the president talking about things he has done as president, taking credit for economic progress and all sorts of other things, the contrast could not be bigger. I'm not sure this debate between Biden and Sanders -- which has to happen, they have got to fight it out -- looks very good relative to an incumbent president.

SEN. ELIZABETH WARREN, D-MASS.: They actually published the phone numbers and home addresses of the two women, the executive director, the communications director, women of color, immigrant women, and really put them in fear for their families. And that was wasn't the first time it happened.

WARREN: It is. And it just is.

BAIER: They spent about seven minutes on that, Mollie. She hasn't endorsed, but that's probably not helping Bernie Sanders.

MOLLIE HEMINGWAY, THE FEDERALIST: Perhaps it's not. I do think that we have had a lot of this talking point that Elizabeth Warren was hurt by being a woman. I think that's a little bit hard to match with the recent history of the Democratic Party which nominated Hillary Clinton, got behind her strongly, gave her so many votes in 2016. There were other female candidates who didn't make it. Actually, by comparison Elizabeth Warren did pretty well.

There does seem to be this desire to make Bernie supporters out to be somehow wholly different than other people. All supporters of politicians get passionate and they get supportive of one side and opposed to the other. But the bigger problem with the Bernie and the Biden matchup is I don't know if Bernie himself has that fire in the belly that he needs to take on an opponent. He always seems to pull his punches at the last minute. In 2016 he had Hillary Clinton on the ropes, and he said don't worry, I'm not going to make a big issue of your mishandling of classified information on a secret unsecure server. And again, he is talking about old votes, but it doesn't seem that he is really doing what it's going to take. And it's going to take on a lot to take on Biden at this point.

CHARLES LANE, WASHINGTON POST: There is a certain thing out there in progressive land that Elizabeth Warren kind of owes her endorsement to Bernie, number one, and number two, it would make a huge difference, that somehow she would bring a lot of votes to Bernie. I'm not sure I agree with either of those points, in part, because there is clearly some bad blood. We haven't even talked about the incident where she and he clashed over what he said about how she couldn't win because she is a woman and then she accused him on lying on television, and so on. So I think she is going to keep her powder dry for a while. And Bernie is going to have to do it on his own.

BAIER: Quick trip down to Candidate Casino. Fewer and fewer spots to put your money, $100 in chips. Quickly?

LANE: Well, I'm giving $80 of my dollars to Joe Biden who already has a third the delegates he needs, and it's very hard for Bernie to catch up.

HEMINGWAY: I'm with Charles, $80 on Biden. It seems like he really is the favored person, $5 on Sanders because it's not a done deal. But I still think $15, perhaps, on someone else once everyone realizes Biden is the presumptive nominee.

YORK: Not as bullish on Biden, $65 on Biden, $25 on Bernie, and still the possibility of something going spectacularly wrong, $10 on chaos.

YORK: Winner is all politics -- James Clyburn. He is the man in the Democratic Party, the man who saved Joe Biden. If Biden becomes president, Jim Clyburn can get anything he wants. And the loser is pretty obvious. It's Michael Bloomberg, the man who just set a giant mountain of money on fire for maybe the greatest political folly on time.

BAIER: But how much money? Winner and loser, here we go.

HEMINGWAY: My winner, Democratic establishment. They came out of Nevada needing to do something major to make sure that Bernie Sanders was not the nominee, and they did everything they needed to do, getting behind Biden, making sure that the right people dropped out. It really was impressive, and they really did impressive work.

My loser of the week is math. Math did not do well. We had last night MSNBC host and "New York Times" editorial board member calculating that if you gave $1 million to 327 million Americans, that that would be less than $500 million that Bloomberg campaign spent. Of course, you would only get a buck or so per person to get.

BAIER: They told them there would be no math. All right, Chuck.

LANE: I go last but I have the most obvious winner, which is Joe Biden, who obviously had been left for dead and then surged to the front and now is the presumptive nominee, all in about two days. My loser of the week was Senate Minority Leader chuck Schumer who made a very ill-advised and threatening set of remarks out in front of the Supreme Court, and he paid a price for it.

BAIER: All right, panel, thank you. Have a good weekend.