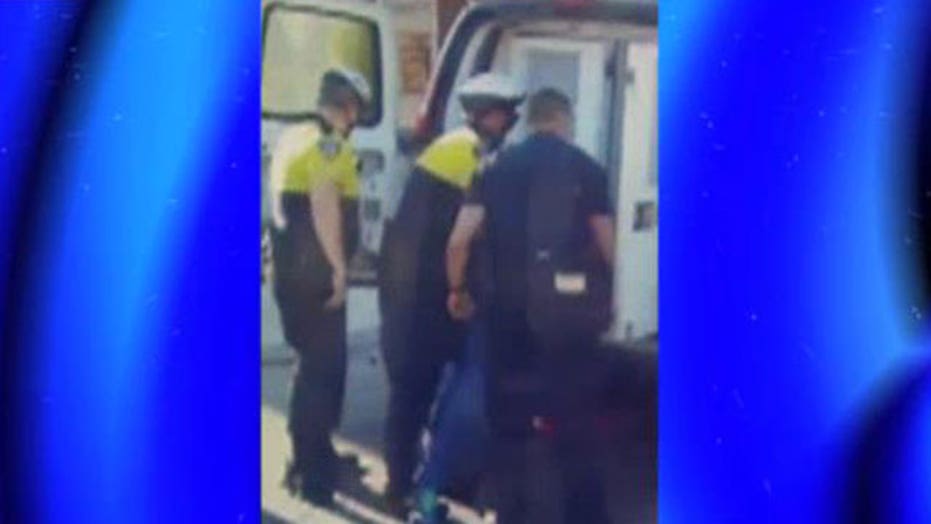 Friend of Freddie Gray reacts to new reports about injury

Report: Gray may have intentionally tried to injure self

This is a rush transcript from "Hannity," April 30, 2015. This copy may not be in its final form and may be updated.

SEAN HANNITY, HOST: This is a Fox News alert. Widespread protests happening all over the country tonight. But first, joining me now is a friend of Freddie Gray who got to know Gray very well after bailing him out of jail on multiple occasions. He is on the phone tonight, Freddie Gray's bail bondsman and friend Quintin Reid is with us.

Quintin, how many times did you bail Freddie out of jail?

HANNITY: But he had a lot more arrests than that, mostly for the distribution of narcotics?

REID: Well, I knew about three of them.

HANNITY: And what were the narcotics? Heroin?

REID: Yes. Well, heroin is prevalent in that area.

HANNITY: So he is a heroin dealer?

HANNITY: He was a heroin dealer?

REID: He was accused of being a heroin dealer.

HANNITY: Didn't he spend a couple of years in jail?

REID: No. I think he spent about six months. I think it was deferred. He had 100 hours community service.

HANNITY: Let me ask you this. And, look, I don't know why somebody at 8:39 in the morning would run away from a police officer. Does that sound like a natural reaction to you?

REID: In that area it is.

HANNITY: So if you're doing nothing wrong and you see a cop on a bike at 8:39 in the morning, you think everybody's reaction is to just run?

REID: No, but I can put a light on Freddie's.

HANNITY: In other words, would it be because maybe he was involved in the previous activities that got him in trouble with the law?

HANNITY: Let me ask you this. We have WJLA reporting this afternoon that sources are reporting that Gray's death and the medical examiner concluded that his injury was caused when he slammed himself into the back of the police transport van. And according to this report, by WJLA, the neck injury is consistent with the bolt that was in the police van. In other words, these are self-inflicted injuries that resulted in his death.

REID: I can accept it.

HANNITY: Yes. Do you think the community can?

REID: I can. Well, the community may not accept it, Hannity, because the community know one thing. They say Freddie wasn't put in his seat belt.

REID: The police never use seat belts in the paddy wagon, never.

REID: And by the commissioner, the mayor, and the union chiefs didn't know that?

REID: Something should be done, because rank and file know it.  They're not going to get in your personal space and tuck you in like a baby.

HANNITY: Let me ask you as a bail bondsman who bailed him out on three occasions, you say it's very common the dealing of narcotics in the area, the distribution of narcotics. Isn't that a sad state of affairs for a city to be in?

REID: It sure is. But what I really appreciate -- I'm sorry this happened to Freddie.

REID: But I'm glad everybody see the sad state of affairs that Baltimore is in.

HANNITY: Yes. It seems -- and I would agree with you, and there are some politics involved. It's probably not the night to get into it. But this is a Democratic-run city with a Democratic council and a Democratic mayor and a mayor that said, you know, let them destroy, give them room to destroy, and a mayor that said stand down to the police on Monday night.  And we saw, you know, the innocent people of Baltimore in their homes scared to death and businesses burned to the ground and rocks and bricks and boulders thrown at police officers. It's sad to see that in any city.

REID: It sure is.

REID: But you have to learn the underlying reason.

HANNITY: And what do you think the underlying reason is?

REID: Let me tell you something. Like the city did a bad job in conveying the issue here. They didn't explain it to the people. So what happen, it sounds like mumble jumble. Now in this area where Freddie Gray is from, over -- more people are locked up from Sand Town than any community in the state of Maryland. Now right there, that's a sad statement. Now, you have good people there. You have homeowners. You have people that have been there five or six generations, OK. But the war on drugs is not doing anything. The little kids just like Freddie Gray --

REID: No, no, most definitely not. No, no. I never would like to want to legalize heroin. I'm talking about the war on drugs. The war on drugs is also a war on people.

REID: They sure is. But everybody in that neighborhood has rights.  And when you strip them people of their rights, you make them very paranoid.

REID: It said that when they ran down on him and caught him, they couldn't catch nobody he sold the drugs to. He had 300 bucks in his pocket. They put him on a curb and asked a half hour of scouring the neighborhoods. The came back with a potato chip bag and said it was his heroin. So I guess the second time he seen the cops, he didn't make out too good the first time.

HANNITY: Do you believe he was set up by the cops or do you believe the long history of narcotics is accurate?

REID: No. What I think is that the cops knew him, they even said they knew him by sight from the cameras. But knowing somebody and knowing that they're selling drugs is no reason to mess with them. They have to be doing something.

HANNITY: Listen, if I get in trouble, you sound like a good guy. I want you to be my bail bondsman, but I hope I never have to use you.

REID: I hope you don't, either.

HANNITY: All right, my friend, thank you very much for being with us.