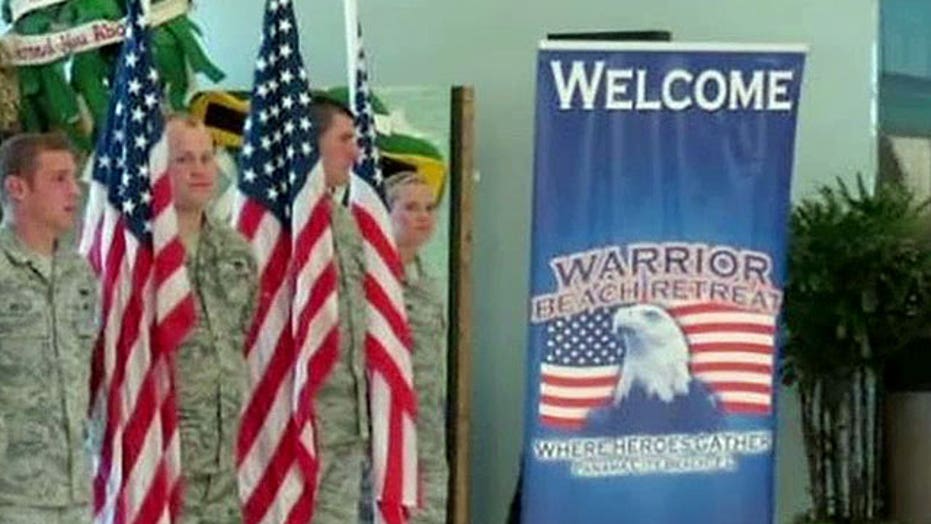 This is a rush transcript from "The Kelly File," April 24, 2015. This copy may not be in its final form and may be updated.

MEGYN KELLY, HOST: Also tonight, two college fraternities have been suspended and three members expelled after students are accused of grossly mistreating wounded warriors. It happened last weekend in Florida. The vets and their loved ones were in Panama City Beach for what was supposed to be a week-long retreat. Instead, they were treated to disgusting behavior that included having college kids spit at them, they had bottles thrown at them, and if that was not enough, the college kids even urinated on the American flag in front of them.

Linda Cope is the Warrior of the Beach Retreat founder. She started this retreat after her son, Sergeant Joshua Cope, was severely wounded in an IED blast and lost both of his legs. Marine Corps Sergeant John McKay attended the event and witnessed this terrible display.

This is so deeply disturbing. Let me start with you on that, Linda. You organized this retreat for the purpose of what?

LINDA COPE, WARRIOR BEACH RETREAT FOUNDER: Well, at the time of R&R and it is -- our community is what host this in Panama City Beach. It is such a place of healing. We were on our sixth year. They come for eight days and seven nights for a time of the R&R. And we had the parade on the 16th where 8,000 to 10,000 people lined the streets to go to an opening ceremony.

So, Panama City -- Panama City Beach is a place of patriotism of honoring these men and women and they enable us to do that.

COPE: So, we are very grateful.

KELLY: ... you were in attendance. You served three tours of duty in Iraq. You're in attendance. A lot of guys have PTSD and are getting through some serious issues and what do you see with respect to these college morons?

JOHN MCKAY, U.S. MARINE CORPS: You know, we -- a lot of us are gathering outside. You got to understand a lot of these guys don't leave home now. They're secluded. They like to stay by themselves because they don't think anybody cares about them.

So, Linda Cope and the Bay County area in Panama City Beach they have a sheriff for these retreats. And all these guys are starting to come out to their shells and starting to congregate and fellowship with each other. As they're doing that, you know, these -- these -- these college kids are completely tearing that apart from a -- you know, tearing us away from that and we're sitting outside of the hotel there.

KELLY: What were they doing?

MCKAY: Well, we were sitting outside of the hotel Friday evening. We had just got back from a day of, you know, full of events that the Panama City has given to us and these guys are standing up on a balcony and they were throwing big champagne bottles down on us. They're urinating off the balcony onto the flags.

One event, we were standing there, you know, chit-chatting with each other and a group of people came by, they ripped the American flag out of the ground which is right in front of our conference from we're standing at. And they started to walk off with it and we stopped it and confronted them and said, "Hey, what are you doing? What are you doing?" They said, "Oh, we don't mean anything by it. We don't mean anything by it." Well so, if you don't mean anything by it then explain it. And you need to put the flag back and you need to put back where you found it and then you need to go on your way. And, you know, that was just one of the many events that happened from Friday night until Saturday afternoon when it was all solved -- when it was done.

KELLY: Linda, have you, I mean, obviously you tried to put a stop to it. Have you heard anything because now we hear the fraternity says, it's embarrassed, it's mortified. It says that it suspended these students or expelled these students, Zeta Beta Tau. They call it ugly and unacceptable behavior. The University of Florida has given you a statement. Emory University has given a statement saying they're not sure if their people are involved but they if are, it's disgusting, they're sorry. What do they told you?

COLE: Well, they're doing everything in their power to get to the bottom of this. They are taking it very seriously and the fraternity superintendent is to be commended for not shoving this under the rug. And they are taking whatever actions need to be taken to resolve this conflict. And they're also trying to help our corporation, you know, they said, "What can we do to rectify this." So, I commend the fraternities to make this right...

KELLY: How can we help? How can our viewers help? Is there a foundation?

COLE: Yes. I'm the founder and president of Warrior Beach Retreat. They can go to our website warriorbeachretreat.org. We're a 501(c)3, not affiliated with Wounded Warrior Project. We are local charity and they can donate at PayPal right there, and just pray for us. Because we are Christians and we feel God's given us this vision to bring hope and healing, and it was so disheartening to me as a mom to see that the way these men and women were treated, but I was so proud of them because no one retaliated.

These are men and women that show the quality of the character of the men and women that are serving our nation that wanted to honor Warrior Beach Retreat to not bring us harm and they stayed in control. And anybody knows what these men and women go through. It affects the whole family. And it's -- I'm very proud of the men like John McKay that were there that they kept their cool when somebody else might not have...

COLE: ... for the things they were saying and doing. I'm very proud of them and very proud of our community for getting it under control, for the resort, for the police, the security, that the second night was a good night and the rest of the time they were there was very positive.

KELLY: -- and the real men who were standing beneath them watching them desecrate our flag and trying to desecrate these men's honor, which, of course, they could never do. Thank you both so much for being here.

KELLY: With this story.

KELLY: Don't forget, whenever we mention a website like that on the air it always crashes. And it's not a big organization with a lot of money, so, do her the courtesy of trying tomorrow. Try on Sunday, make a note on your iPhone, so that we can really get through.