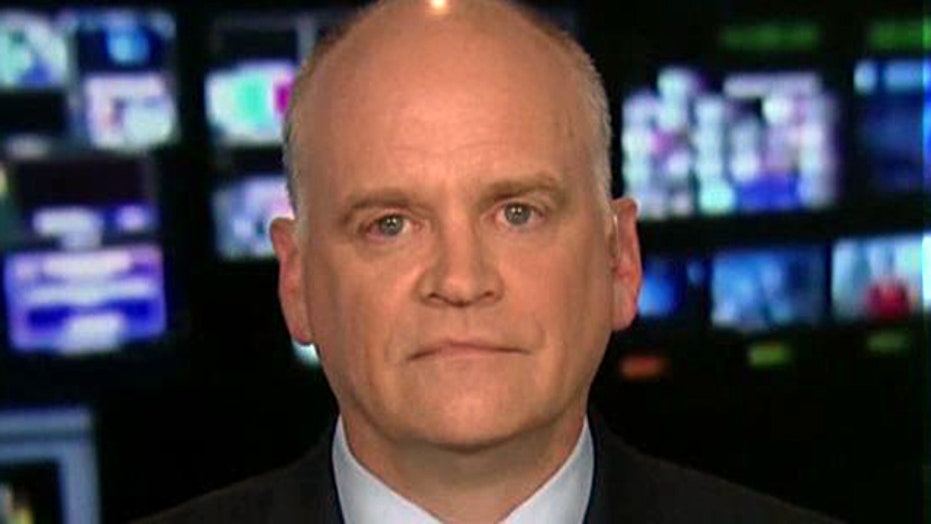 Fournier says we should be comparing presidents, learning from history

This is a rush transcript from "The Kelly File," November 20, 2013. This copy may not be in its final form and may be updated.

MEGYN KELLY, HOST: Well, as we have been reporting President Obama has taken a major credibility hit with statements like if you like your plan, you can keep it, period. My next guest says that ObamaCare is the president's Katrina or Iraq for that matter. He defends that comparison saying that the president has a credibility problem that is similar to the one developed by President George W. Bush after his handling of Katrina and Iraq.

Ron Fournier is a national correspondent for National Journal and my guest now. Ron, good to see you. So people didn't like that comparison in particular people on the left saying you have to be crazy. People died after Hurricane Katrina. They died, of course, in the Iraq war. How can you compare the failed rollout of ObamaCare to that?

RON FOURNIER, NATIONAL JOURNAL NATIONAL CORRESPONDENT: That's the oldest trick in the book, deflecting it to the comparison you want to make. Of course, I'm not comparing the crises. There is no comparison quantitatively to between Iraq and Katrina and ObamaCare. There haven't been thousands of deaths with ObamaCare. There is a correlation about how the presidents have handled their crises politically and how the public now views them.

KELLY: Now we are seeing a similar approval rating, amazingly. I mean, for a president with -- you know, in Barack Obama was at incredible heights when he first took office. Now look at this. So 1,760 days into their presidencies, President Obama, 41 percent, President Bush 38 percent, a difference of three points under the Gallup polling. CBS News puts it within two points, 37 percent for Barack Obama now, 35 percent President Bush in the similar point in his presidency. They are neck and neck now in terms of how the public dislikes them, Ron.

FOURNIER: It's a race to the bottom. Those aren't the most important numbers. What held up President Bush during his most troubled times in his first and second term were the people -- even if they didn't agree with him they liked and trusted him. Same with President Obama, he got through some tough times because people liked him and trust him.

KELLY: How is he supposed to reverse this? How does Barack Obama -- you said President Bush never came back after Katrina.

KELLY: Can Barack Obama come back?

FOURNIER: He can. Just because it hasn't happened before doesn't mean it can't again. He is really going to have change the way he does things though. First of all, he has to focus on leading and getting something done and following through on the really nitty-gritty of governing. Something he doesn't like to do.

KELLY: I'm sorry. Let me interrupt you. He keeps trying to get something done. We talked about whether he's doing it in a way that's constitutional and is allowed. Right now, Barack Obama wants to solve it. Right now, Barack Obama has essentially created this problem for at least 5 million Americans, and now with the wave of a magic want he wants to solve it. We have folks we call lawmakers on Capitol Hill saying you can't do that, Mr. President, you can't exclude us from the process. We started the show with a clip of then candidate Obama in 2008 upset about the excesses of presidential power under George Bush. We have a shortened version of it. Here is a sample for those who missed it. Stand by.

KELLY: Now there's this backlash saying, look, you helped create the problem. You can't fix it without involving the people's representatives.

FOURNIER: You're right. You are the one who's taught constitutional law. I barely got out of University of Detroit. I don't know if it's unconstitutional, but I can tell you this. It's spin. He's not really doing anything. He's asking the insurance companies would you please let them have their plans that were ungrandfathered out.

He's basically shifting the blame from himself to the insurance companies when people aren't able to get these plans back, they will complain to the insurance companies. I don't think -- he has to get the site fixed, shoot straight with the American public. Let them know as Lanny Davis was saying exactly what went wrong and exactly what he'll do to get it right and stop spinning. Stop playing politics. Just get it done.