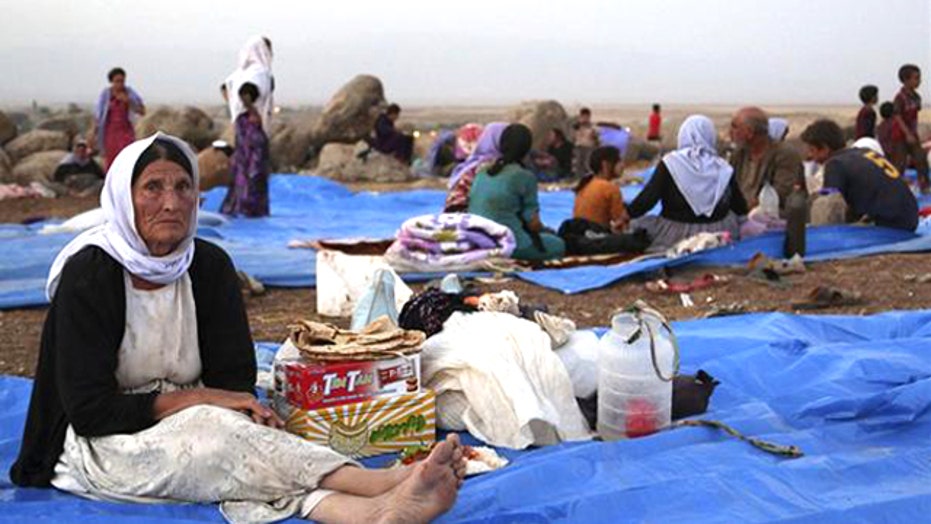 This is a rush transcript from "The Kelly File," August 13, 2014. This copy may not be in its final form and may be updated.

MARTHA MACCALLUM, GUEST-HOST: Breaking tonight, the U.S. may be signaling that it's about to back out of plans for a rescue mission to save thousands of Iraqi Christians and others who are trapped and are dying as they are being hunted down by the world's most violent terrorists.

Welcome to "The Kelly File" tonight everybody. I'm Martha MacCallum in for Megyn Kelly.

So, over the last two days we have seen unbelievable video from Mount Sinjar in Iraq where an estimated 30,000 people are trying to get off the mountain as ISIS terrorists, the group now taking over the country of Iraq one city at a time, are coming after them.

This is video we got a short while ago tonight as an Iraqi military helicopter showed up to rescue the few people that they could carry. Children and elderly and everybody scrambling to get on that chopper. They can only carry a couple dozen people, each one. There's only three of them right now because one of them crashed the other day in its evacuation effort.

But there are reportedly thousands of people on the mountain dying by the hundreds from lack of water, lack of food and temperatures that are topping 100 degrees up there. Just imagine what it is like for them.

So the Obama administration started today saying that they're looking at rescue options, but they did not want to see U.S. troops engaged in combat on the ground. Here is a report from the State Department today.

UNIDENTIFIED REPORTER: Would you say that Mount Sinjar is located in a combat zone?

MARIE HARF, STATE DEPARTMENT DEPUTY SPOKESWOMAN: I don't know technically what I would say. Clearly there's a lot of fighting going on around it.

HARF: Well, they won't be, period.

MACCALLUM: Well, the problem with that, the terrorists are all over this area. They are firing at those Iraqi choppers as they fly away. The military and the refugees knowing that if they get on that chopper they are lucky to escape alive. Here is the next part that we want to show you of the evacuation flight.

The applause and happiness on those people's faces as they realize that they are going to get out.

Joining me now is Seth Jones, advisor to the commanding general of the U.S. Special Operations Forces in Iraq and Afghanistan and who works with the RAND Corporation International Security and Defense Policy Center now.

Seth, in just the last hour or so the Defense Department -- Secretary Hagel, made it sound like a rescue mission may not be happening at all now, saying that there are actually fewer people on the mountain than thought and that they seem to be doing better than believed. What do you make of that given these images?

SETH JONES, ADVISOR COMMANDING GENERAL OF U.S. SPECIAL OPS: Well, first of all, I think the situation is dire. And it's more dire than some administration officials are letting on.

Second, this entire context is being argued by the administration as a humanitarian mission. And as we can see we've got the best equipped, best organized jihadist group anywhere in the world right now pressing in key areas of Iraq and Syria. This is much more than a humanitarian crisis. This is a serious security threat that the U.S. needs to be concerned about.

MACCALLUM: Yes. I mean, I know that you feel like they're looking at a tree or two and that there's a forest that needs to be deeply understood in order to take on this problem. But I want to stay with this rescue mission for just a moment because what exactly does it -- are they saying? I mean, we can see that there's still people on the ground there when these choppers take off. This footage was today and yesterday. So are they saying that the people who are there are doing OK, that they need to fend for themselves, that we're not going to help them?

JONES: Well, I think what they're partly saying is that the U.S. role in supporting them is going to be minimal right now. The U.S. has engaged in some limited air strikes in and around this area, has deployed a very small number of both Department of Defense and U.S. agency for international development personnel in this area. And what appears to be clear is the administration is messaging that it's not going to play a major role moving forward, or not likely playing a major role moving forward.

MACCALLUM: And what do you think the danger is in that?

JONES: Well, I think the danger is as we've seen with key parts of Western Iraq, Northern Iraq and key parts of Eastern Syria, this organization, the Islamic state of Iraq, has controlled key parts of territory. We've also seen Americans that have gone to fight with jihadist groups, both in Iraq and Syria, blowing themselves up from states like Florida, people from states like Colorado attempt to get on an airplane, to go fly, to join. I mean, there are connections between the U.S. and this fight. And to pretend that we don't have a National Security interest, I think, is a big mistake.

MACCALLUM: Are you surprised by the reaction of the White House to this and by the president in particular?

JONES: I'm not entirely surprised, but I'll tell you, it is interesting. In 2011 this same administration used both air power and then limited ground power, both special operations forces and CIA personnel on the ground in Libya. And they used force. There was a lot less at stake in Libya for U.S. National Security back in 2011 than there is in Iraq in 2014 and neighboring Syria. So it does not seem to be a consistent use of force across this administration.

MACCALLUM: And I remember at the time the president said that it was to prevent a massive humanitarian disaster that he felt was about to happen on the ground in Libya and that was the reason for going in. So it's a curious parallel, as you point out. Seth Jones, thank you very much. Good to talk to you tonight.

JONES: Thank you very much.