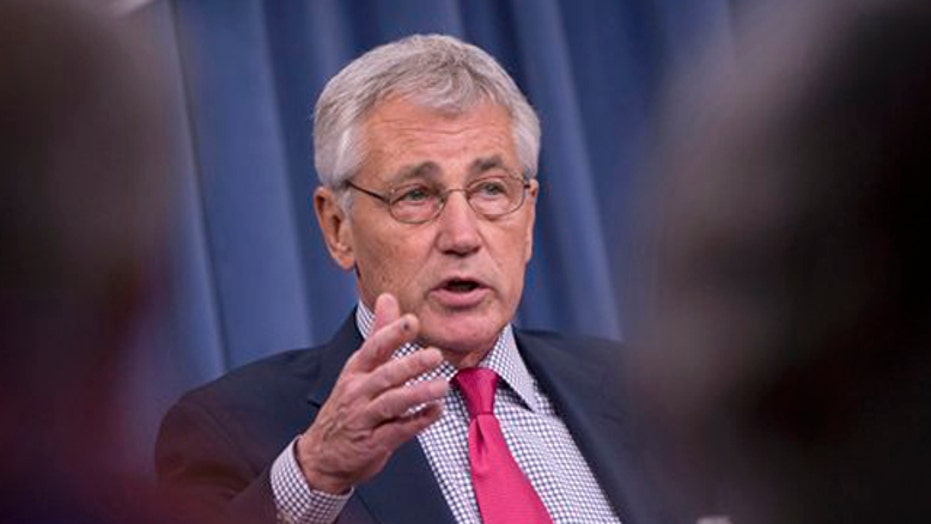 This is a rush transcript from "Hannity," August 21, 2014. This copy may not be in its final form and may be updated.

SEAN HANNITY, HOST: And by the way, so not only is the administration under fire for the leak of the failed rescue mission, which according to some, was intended to be political cover for the president, well, now our commander-in-chief's priorities are being scrutinized like never before. Because yesterday, we saw him deliver a statement on the beheading of an American journalist and then within a matter of minutes, where did he return? Right back to the golf course.

Here to respond are two former CIA officials, Michael Scheuer and Bill Cowan. Gentlemen, welcome back to the program. Good to see you.

First of all, let me -- what is your reaction? I don't think it was just a little over three minutes that the president spoke about this horrific beheading, and really, a threat of war because they were addressing the United States.

Bill Cowan -- and he was right on the links minutes later, The Hill said. What's your reaction to that? Wouldn't -- if I was the president, I'd be in the Situation Room with every national defense person I had.

LT. COL. BILL COWAN, USMC (RET.), FOX MILITARY ANALYST: Sean, Nero fiddles while Rome burns. I think this president could care less about all the threats we face. He's probably gliding along on a path where he hopes nothing will happen to the United States in the next two years while he's still the president.

But the reality is, and we heard some of it today from the secretary of defense, we face a threat unlike any threat we've ever faced in our lives. And this administration seems to be doing nothing about it.  Dropping some bombs here and there is nice. We can't show enough respect for the men and women who are doing that. But we're just nibbling at the edges, Sean. We haven't even started to go after these people.

Jihadi John is one of hundreds of foreigners, including Americans, who have passports and who can travel freely.

HANNITY: All right, Michael, you know, the president referred to ISIS as the JV team. Look at what they did to James Foley. The State Department yesterday said the ISIS threat is not about the United States or what we do.

I'm going to put up a map here. Take a look -- let's just look over the cities that ISIS have now taken over. Mosul and Tal Afar and Sinjar, and it goes on and on and on, Fallujah.

Look at all those cities that we've got there. And then look at this other map we have of terror groups around the world. ISIL, ISIS is in Syria and Iraq, as we just showed. Boko Haram in Africa, the Taliban in Afghanistan, Hezbollah, Hamas in the Middle East, as well as, you know, we know of the Islamic hotbed in Russia, Chechnya, and all these other Asias, groups in Central Asia, also terrorists in Southeast Asia and domestic terrorism in Turkey and in Greece.

I got to tell you -- how -- how can the president be this -- he said the tide of war is receding, you know, man-caused disasters, overseas contingencies. This looks like pre-9/11, and the 9/11 report said they are at war with us and we're not at war with them. Are we back to that mindset?

MICHAEL SCHEUER, FORMER HEAD OF CIA BIN LADEN UNIT: I don't know if we ever left it, Sean.

HANNITY: I think George Bush and Dick Cheney left it.

SCHEUER: Well, they had a chance to destroy Al Qaeda, and they didn't do it. And now we're going to surrender Afghanistan back to them. We have to begin to see the world as it is and not the way we want it to be. Mr. Obama doesn't understand anything at all about what's going on in the world. We're now seeing -- I think what we're seeing...

HANNITY: Did you hear what he just said, that the president of the United States doesn't have a clue about radical Islam? Does he not see the same map I see? I would assume he gets intelligence briefings every day, Michael.

SCHEUER: I think he is a theorist. I think he's a Harvard intellectual, or pretends to be, and he wants the world to be at peace. He doesn't see what's going on at all.

HANNITY: Well, he can run all he wants! You know, I would wish that Adolf Hitler never emerged also. But the reality and the truth is that he did, and six million Jews were slaughtered in a Holocaust! So...

SCHEUER: Well, the problem lies not with me but with the president.  And there's no way to get rid of him for the next two years. So we're stuck with him.

But what we're seeing, Sean, in the Islamist movement -- Mr. Hagel was wrong to say they've never seen anything like this, as if it was a surprise. This movement is an evolutionary movement. It's gotten consistently stronger since 1988, when Al Qaeda was formed. Al Qaeda is now a small part of a much bigger, self-perpetuating thing.

And what we're seeing in Iraq, based on your map, is what Mao Zedong called the final stage of an insurgency, which is the beginning of formations of battle-hardened and semi-conventional units, which are taking on the military in Iraq.

This is very serious situation, but there's no one in the United States who will say that...

HANNITY: Well said. Thank you both. Appreciate it. Remember, the head of ISIS said, "We'll see you in New York." And they're going to wave the flag and raise the flag of Islam in the White House. That's their threat. It's coming.