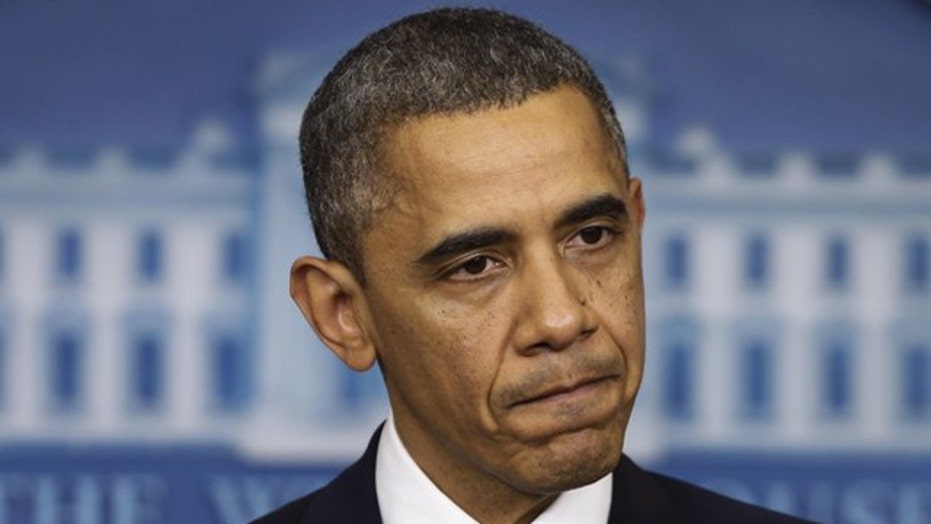 President to blame for income gap?

PRESIDENT'S FOCUS ON INCOME INEQUALITY SPARKING DEBATE OVER HIS POLICIES

MICHELLE FIELDS: Income inequality is not a disease, it's a symptom. If Obama wants to know what the disease is, all he has to do is look to his policies, because it's his economic policies that are creating more economic inequality. I think it's ironic that he's suddenly talking about inequality after he returned from a $4M, 17-day vacation in Hawaii. If we're on the subject of inequality can we talk about why it's fair that he goes to Hawaii and I can't? That to me is vacation inequality.

JONATHAN HOENIG: Income inequality isn't a problem; it's actually a virtue. Think about what Obama is actually advocating for here: not equality of rights, but equality of outcomes. This is this evil egalitarianism. "We're all the same, we're all the same!" We're not all the same. The only way Obama can make us all the same is by cutting down, Eric, to your point, tall poppies; the achievers among us. Steve Jobs, Bill Gates, Michael Dell's wealth is theirs. You don't help anyone by redistributing to those who haven't produced by taking it from those who have.

WAYNE ROGERS: The President has been there for five years and the unemployment rate is still 6.7 percent. In other words, none of these policies have worked. All of this Keynesian theory if we put money back into the economy on behalf of the federal government that it's going to help everybody, is just trash. Nobody has read Milton Freedman. Nobody has read Hyatt. Nobody has read von Mesis. These are people who are ignorant, for the most part, about economic theory. So as a consequence they buy into this, like the President has done, and the results are disastrous. Of course there's going to be inequality. You can't have a degree in rocket science and think that you're going to have the same equality level as some guy who's never gone to school before. That's idiotic.

JONATHAN HOENIG: When the government advertises for the military, Eric, that's okay, that's moral because the military is actually a Constitutional part of government. The government advertising for ObamaCare is propaganda. It's using taxpayers' money to try to promote more government force, and convince people that your loss of freedom is okay. That's just a normal fact of life. It's not, and it should be stopped.

WAYNE ROGERS: Why should government be spending any money to advertise any law. That's insanity. Should they advertise the laws that say "by the way, there's a stop sign on the corner so everybody has to stop." They're spending taxpayer money to do this?! This is insanity! This has gone just totally berserk. I can't believe that they would do this. You're seeing that they're spending money to advertise a law that Congress has passed-it just doesn't make any sense at all. Jonathan is absolutely right.

BOB BECKEL: First of all, I want to know if Wayne's makeup artist had the same view about that, as well. I'm curious. Sorry, had to get that in there. When you've got 40 million people that you're trying to get there on this insurance policy, that's a lot of people. It's unprecedented. Of course they should advertise.

MICHELLE FIELDS: It's a complete waste of money. They shouldn't have to advertise it. Why not get health care reform that people actually like. Look, the Olympics is such an amazing moment for Americans. They feel so much patriotism for their country. Why does Obama have to go and ruin it and show us a commercial for ObamaCare, reminding us that we have ObamaCare. That's such a buzz kill.

BOB BECKEL: I don't think the flap that you talked about is such a big deal, but leaving that aside the thing about Christie-he did a good job in his press conference and I give him credit for that. But the fact of the matter is if you're the chief executive of state, and the most important artery in your state is backed up and there's a lot of complaints coming in, the only people they asked about it are staff? I mean this guy used to prosecute bad politicians; he didn't just take their word for it.

WAYNE ROGERS: They've spent 17x as much time on it. We know that the press is prejudicially democratic; you know that. They're going to attack Christie in any case. They let Hillary off the hook on Benghazi. They let her off the hook on File-gate. They let her off the hook on White Water. This is a lying, cheating woman who has more ambition to be the president of the United States than anything else, and as a consequence the press, who is sucked in by this blindness is going to make a big thing about him and the traffic which has nothing to do with-and by the way, they knocked Rumsfeld when he was secretary of defense. He went down to Congress and said "I take responsibility for Abu Grahib because I'm the Secretary of Defense. You would never hear Hillary doing that.

JONATHAN HOENIG: This would have never happened had the roads been privatized, which we've been talking about for a long time. I happen to think Christie's scandal is potentially criminal, as the democratic scandals are. I think the reason for the media double standards are Obama is seen as this altruist; he's sacrificing for student loans, for everyone else.

MICHELLE FIELDS: Absolutely, the top networks have dedicated 17x more coverage to this than they did the past six months on the IRS scandal. Let me just say, Christie came out and he fired the woman. Obama didn't even fire Lois Lerner. He allowed her to go on paid leave.

WAYNE ROGERS: (AAON) HEATING UP PROFITS IN THIS COLD WEATHER