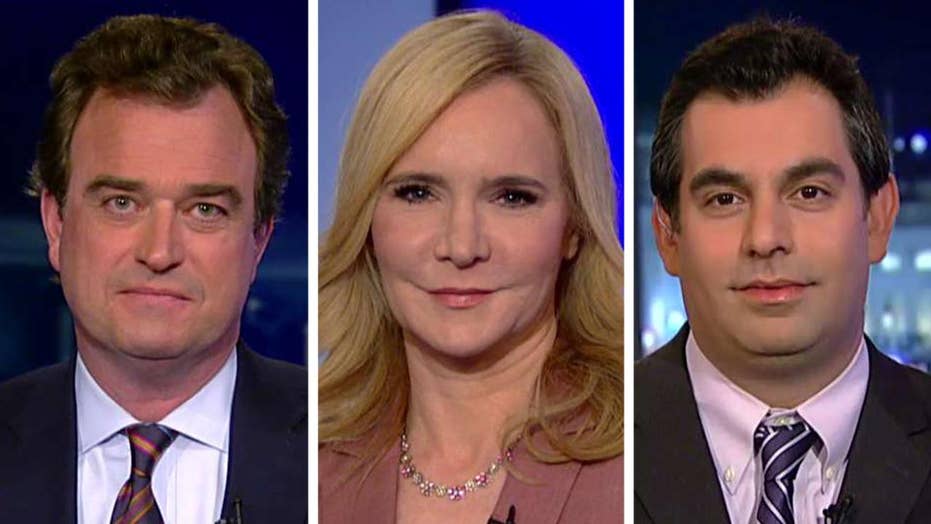 This is a rush transcript from "Special Report with Bret Baier," November 9, 2018. This copy may not be in its final form and may be updated.

GOV. RICK SCOTT, R-FLA.: Broward County came up with 78,000 more votes after the election night. How did Palm Beach County come up with 15,000 more votes? They can't tell us where they came from.

SEN. BILL NELSON, D-FLA.: We believe when every legal ballot is counted, we'll win this election. Votes are not being found. They are being counted.

BRET BAIER, ANCHOR: He sounds normal regularly. There you see Florida Senator Bill Nelson and Governor Rick Scott and the president. Why? Because this is all heading to a recount and it's getting nasty down there. These are the latest numbers, a difference of 1.8 percent that a mandatory, manual recount looks like it's going to happen when it's certified tomorrow.

In the governor's race, it's heading to a machine recount at first, but we don't know. There may be more ballots out there. And if it gets under a quarter of a percent, it will be a manual recount too.

Just tonight a judge ruled in favor of Rick Scott ordering the defendant to have the supervisor's staff, this is about Broward County, review the duplicate ballots together with representatives, basically saying the Broward County supervisor needs to show her cards and her ballots and what the process is. We've been around this before, trust me.

Let's bring in our panel: Charles Hurt, opinion editor for The Washington Times; A.B. Stoddard, associate editor at Real Clear Politics, and Josh Kraushaar, the political editor for National Journal. OK, Josh, it looks like there are teams of lawyers already getting in position down there.

JOSH KRAUSHAAR, NATIONAL JOURNAL: President Trump is trying to frame this as an issue of fraud but it really is an issue of incompetence. And the Broward County election commissioner doesn't even know how many more ballots are left account --

BAIER: Or she doesn't want to say.

KRAUSHAAR: Doesn't want to say, doesn't want to talk to the press.  Transparency is so important in our election process, understanding where the votes are coming from, when they were cast. And there is a basic inability for the election officials in these two key counties not to give that information to the press or to the campaigns.

BAIER: Senator Marco Rubio has been very active on Twitter on this, saying "Not very comforting to Florida voters that Broward County supervisor in whose hands may rest the outcome of the Senate and cabinet race has in the past illegally destroyed ballots, secretly opened mail ballots, sent voters too many ballot pages, left constitutional questions off the ballot." Here is the Broward County Elections Supervisor Brenda Snipes.

BRENDA SNIPES, BROWARD COUNTY ELECTION SUPERVISOR: All of the mail ballots have been open and they are in the tabulation room for processing. Provisional ballots, we are going to deal with this afternoon at 5:00.

JUDGE CAROL-LISA PHILLIPS, FLORIDA CIRCUIT COURT: Supervisor Snipes shall allow for the immediate inspection, copying, photocopying of the requested records. This is information that should have already been compiled, already be within the system. And if it's not already in the system, that's a whole other issue.

BAIER: This is a process question here, A.B., when we're going to get to the end of the counting.

A.B. STODDARD, REAL CLEAR POLITICS: We don't know, because there could be more challenges and more questions. There are definitely questions about this process and about Brenda Snipes and her record on the job. And it really is a question, I think, for Rick Scott and why he didn't replace her before this close and contentious election.

He has won, the court has decided in his favor and she's going to have to access these ballots and show her hand. But the idea, on the other hand, of painting a broad brush across the country, that Arizona is questionable, there's rampant fraud, as Josh pointed out, everywhere, that the president is doing is exactly the opposite of what he is supposed to be doing.

We need whatever trust is left in these systems and this process to be maintained. It is his job to not be pit bull in chief. He has Rudy Giuliani and people to run around Twitter and make all these false accusations. But what they are doing in Arizona is just fine. They are counting the votes. And people need to pay attention the real difference between what the discrepancies are in Broward County where they had this funky design where you couldn't even see the Senate race.

BAIER: Yes, a new ballot down there.

STODDARD: It's just a mess. And rightfully so to ask these questions, but that doesn't mean that every system everywhere in this country is riddled with --

BAIER: So Arizona, you mentioned, we are getting vote totals, another dump at 7:00 p.m. eastern. But as we are going through the day, that race is also tightening, 0.49 percent difference. Kyrsten Sinema with a slight lead right now as there are some 4y5,000 ballots still uncounted in Arizona, Charlie.

CHARLES HURT, WASHINGTON TIMES: And obviously there is a difference between what's going on in Arizona and California and some of those races, and in Florida. But the problem is that, as Josh pointed out, whether it's fraud or incompetence, it's not working right. And it's a real problem. And the idea that at the end of election night, you think there are this many ballots have been cast, and that should be a very simple sort of thing to note. You would think that that would be the one thing that you do know.

Obviously all elections are a balance between making sure that every vote gets counted and making sure that people who aren't supposed to vote don't get to vote because, of course, a fraudulent vote is disenfranchising some other legal voter. And obviously all of it, it really does undermine people's faith in the whole process.

BAIER: And it's familiar in Florida. We thought we dive back into the time machine and go back to Tallahassee in 2000, somebody was there covering it.

BAIER: Attorneys for the Gore and Bush campaigns have now filed briefs with the Florida State Supreme Court as the race for the White House is still in the air. It all remains in the hands of seven justices inside this building. They will hear oral arguments one hour from each side Monday at 2:00 p.m. to decide whether hand recounts ongoing in Broward, Miami-Dade, and Palm Beach counties can be counted in the Florida state totals.

BAIER: What happened to that kid? I was bouncing around courtroom to courtroom, Jim Angle and I in the back of a rider truck for 40 days and 40 nights in Tallahassee. You would think after all that time that we wouldn't be back here. But we are.

KRAUSHAAR: It feels like 2000 all over again, except we don't have butterfly ballots this time, but we're going to have --

BAIER: We have a new ballot.

KRAUSHAAR: Every county is going to do a manual count looking at each vote in that Senate race. And it's going to take weeks, if not months, to really get some resolution. So there is a lot of political stalemate here.  Rick Scott I think it's important to note he has a 15,000 vote lead.  Usually when you have a recount of that size, 0.15 percent in the latest tally, it usually does hold. The big Al Franken race in 2008, we were talking dozens votes. These is thousands.