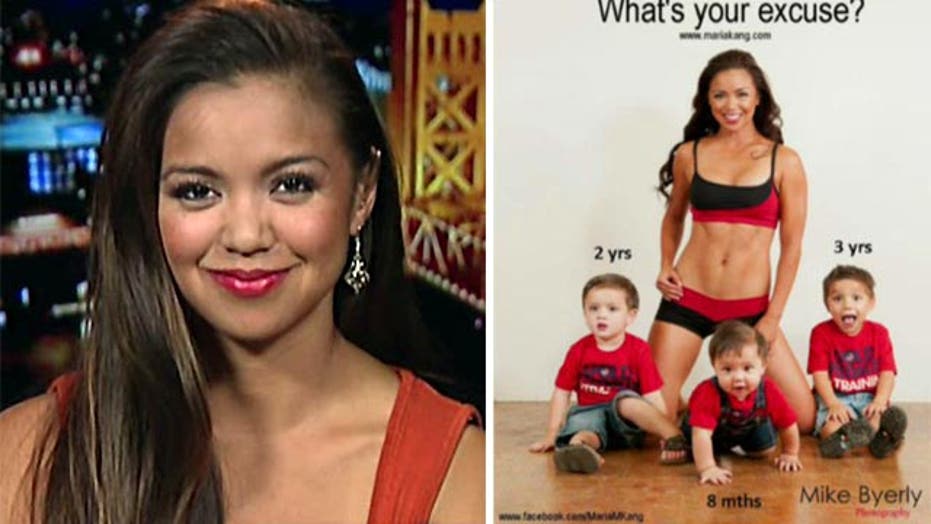 This is a rush transcript from "The Kelly File," October 18, 2013. This copy may not be in its final form and may be updated.

MEGYN KELLY, HOST: A young mother of three young boys is apologizing -- sort of -- after posting a picture on Facebook showing her fit body and asking, "What's your excuse?" A fire storm of backlash came and Maria said she was trying to inspire people.

Joining me now, fitness blogger and mom, Maria Kang, the person who posted that photo. Maria, thank you for being here. Let me ask you this. You had three babies in three years so did I. Why do I need an excuse for not looking like you?

MARIA KANG, MOM OF THREE YOUNG BOYS: That wasn't my question. My question was an open question saying what's your excuse for not working out?

KELLY: Why does anybody need an excuse?

KANG: I think a lot of people make excuses every day as to why they don't make their health a priority. Exercise is really important right now in America. We have an issue. I'm a huge fitness enthusiast and I posted this on my public Facebook page hoping to motivate my followers. I think it did motivate a lot of people.

KELLY: I did motivated people. It also upset people. I don't look like you, I will confess. I asked myself the question, what is my excuse? I thought, you know, because I wasn't obsessed during the last few months since I had my son, my third child, with getting to the gym and getting the six-pack back. In my free time I had a glass of wine with my husband and made other deposits into my health fund, some were emotional health. But you seem to judge that.

KANG: I'm not judging at all. I'm saying, you know, as a mother, you don't have to lose yourself in the process of raising children. I grew one a mother who had diabetes in her 20s, who had a stroke in her 30s and a heart attack in her 40s. You know, when you have a mother, that's usually your first love and your first fear is losing her. So when I make that photo, when I express myself now, it's like I'm talking to all mothers because my fear and my passion is to express that you should really make your health a priority.

KELLY: But health isn't the same as, you know, being super fit with a six-pack abs. This wouldn't be a controversy if you hadn't put the caption there. Just you looking great is an inspiration, that is an inspiration, but what's your excuse presumes something is wrong if women don't look like you.

KANG: No, I think, "What's your excuse?" is an open question. You can take it how you want to. Eleanor Roosevelt once said no one can make you feel inferior without your consent. So whatever I say, whether it's, "What's your excuse?" or, "I can do it, so can you," or, "Mother hood can make you better," which is what I used after the caption, you know, it doesn't matter people will take it how they want to.

KELLY: There is a woman on chicagonow.com who blogged and wrote, "What millions of us see is another example of a woman saying to other women if you want to win at life you have to look like me you lazy piece of, you know what."

KANG: No, that's absolutely not what I'm saying. I'm saying, what is your excuse for not working out? People can take it how they want to. My intention and where I stand my ground is, you know, if I can do it, so can you. Here I am with three kids, 3, 2 and 8 months. I'm able to make fitness a priority, maybe not my first priority. Maybe it's my fifth, but it gets done. Not only that. It's not just about fitness. It's about nutrition. That's the majority of your success is eating throughout the day and making sure you are being fed good foods.

KELLY: I definitely didn't engage in the same exercise plan and I confess I would love to have that body, but the lunches with my husband were pretty damn good.

KANG: I eat good lunches, but it's all about moderation.

KELLY: Whatever, Maria! Thanks for being here. See you soon.

I'm happy to tell you that you, too, can look like me if you don't work out for an hour a day. Just generally watch what you eat and then you buy a couple of good pairs of spanks. What?