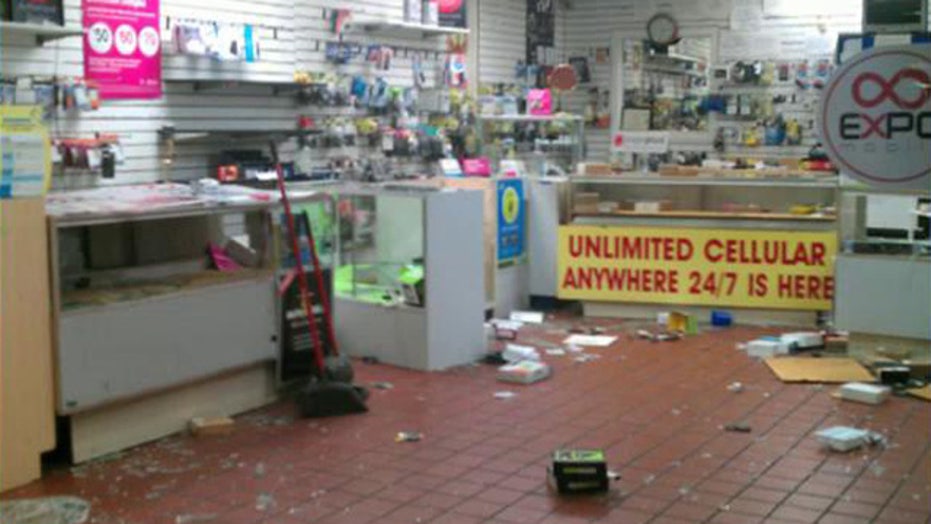 This is a rush transcript from "Hannity," August 19, 2014. This copy may not be in its final form and may be updated.

SEAN HANNITY, HOST: Joining me now from Ferguson to tell their stories are two store owners who had their businesses targeted by looters and rioters during the protest. Mumtaz Lalani is the owner of Dellwood Market and Sonny Dayan is the owner of St. Louis Cordless Communications. Welcome both of you to the program. Sonny, tell us what happened to your business?

SONNY DAYAN, OWNER OF ST. LOUIS CORDLESS COMMUNICATIONS: Well, on Saturday night early morning I had a break-in. I got a call saying there were some movement and people inside my store basically looting. We called 911. The police said they can't do much about it and they can't come in.  I had to come in myself. And after a few hours I was able to get into the street. The street was blocked. And it's just a complete devastation, looking at the place, the difference, what it was when I left it and what it was when I found it. It was just a tremendous difference. Glass all over, shattered, merchandise was missing.

HANNITY: Tell us about your market.

MUMTAZ LALANI, OWNER OF DELLWOOD MARKET: Well, same story with me.  My son was there at the store until about 10:00. I told him, hey, come on down the store early, and as soon as he left the store, the alarm company called him and said there's a break-in at your store. So he called me at home, and I have surveillance at the house so I can watch my store. I saw there were about 30, 40 kids breaking, knocking my windows down and shooting at windows. And I called the police immediately. I said there is a big crowd out of my store. And by the time police get in there, they break in and empty almost my store with liquor, cigarette, beer, and try to put my store on fire at the same time. Sonny said he found some liquor bottles in the store. That must be from my store. They broke in there and had a picnic in your store.

HANNITY: Nobody should have to go through that. That's one of the sadder parts of this story. And I hope you guys get your stores up and running in good time. It's very difficult in this economy to have a business going. And I'm sorry what happened to you. Thank you both for being with us.