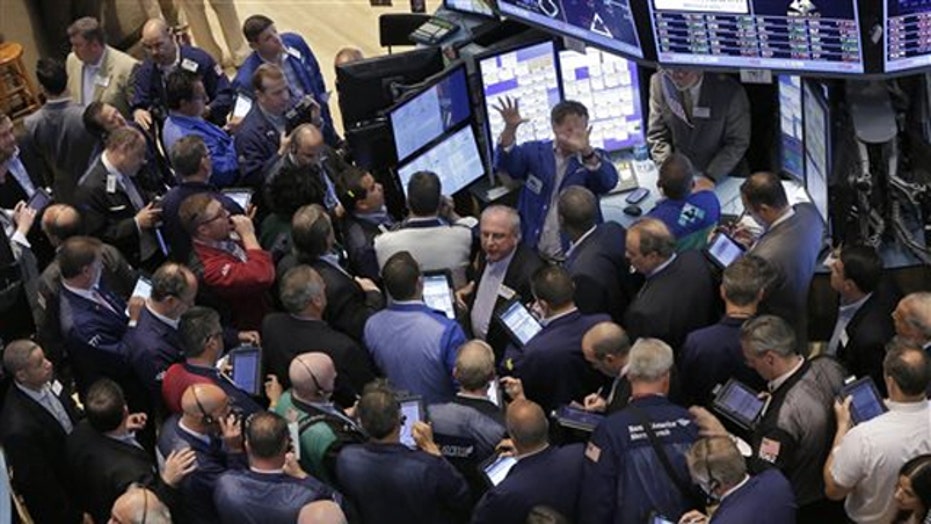 STOCKS ROCKED OVER WORRIES THE FED MAY TAPER OFF ITS "STIMULUS"

JOHN TABACCO: What I think this means to our viewers is they should be very concerned going into Monday morning. We've had an enormous run up over the last few months, even the last year, and people have a lot of profits on the table. What we're seeing right now is a lot of the artificial stimulation the market has gotten by Federal Reserve Chairman Ben Bernanke's policies, it's starting to come home to roost. Our fund feels like the stock market right now has a correction in mind somewhere in the 5 percent to 7 percent range over the next quarter. I could look for somewhere in the course of this week about 1,000 points to the down side. If I was a retail investor, I had some profits, I would go into Monday morning thinking let me take some profits off the table. If the bubble starts to burst, there will be great opportunities down the line. But the prevailing opinion is always sell in May and go away. We're in June. If you haven't sold yet, I'd be selling Monday.

GARY B. SMITH: Well, first of all, John just scared the heck out of me. I agree with him in part of it. Do I think there is more down side? Maybe, but I don't think it's going to be another 1,000 points down. That would take us below DOW 14,000. I think that's probably a pretty safe stopping ground. In direct answer to your question, yes, I started buying late Thursday. I started buying a little on Friday. If stocks drop a little bit more, I will buy a little bit more. Just to put it in perspective, I'm probably about 70 percent invested. So I'd actually like to see a little bit more down side in order to buy more. Overall am I worried? No, I think this is a temporary pull back and probably more of a good buying opportunity than anything else.

JOHN LAYFIELD: Look what happened in Japan. You had them almost straight up and they have come significantly off their highs. This market was about 12,500 a year ago. It's just short of 15,000 right now. So I think it's normal that anytime you have any perception of bad news, people start taking money off the table. But I agree with Gary that this is a buying opportunity if we go much lower here because Bernanke said that he won't raise rates until employment gets down to 6.5 percent. Once you start seeing the economy getting better, more people going in the workforce, it will take a while before they raise rates.

DAVID MERCER: The fundamentals of the economy right now are: the jobless rate is being reduced; you have housing up; and you have corporate profits at all-time high. So I think it was an indication by Bernanke that we are seeing these indicators and these good forecast, so please look at this because we may -- if we hit 7 percent unemployment -- start ultimate putting on the brakes as it relates to easy money.

JONAS MAX FERRIS: The market was getting ahead of the real economy, which is still a little lackluster in a lot of areas especially employment. What the federal government wants to do is keep encouraging growth in the economy, yet stop an asset bubble forming like we had in real estate in the 2000s. So maybe keep the heat on so you don't have to pull the stimulus away. You don't want to have to start raising rates everywhere and cause a recession for no reason. So it's a hard game to play. But that was the strategy. In general, we want to be in an economy where we don't have to have the Federal Reserve creating money to buy debt. That's not a natural state of things or healthy in the long run.

POLL: SUPPORT SLIDING FOR HEALTH CARE LAW; AND NOW GOP LAWMAKERS ARE STEPPING UP FIGHT TO CUT FUNDING TO THE LAW AS WE FIND OUT THOSE HEALTH CARE EXCHANGES NEED ANOTHER $2 BILLION; SHOULD CONGRESS FIGHT THE FUNDING?

JOHN LAYFIELD: Look, Americans are not dumb. In fact they're very smart and that's why most people disagree. We know nothing's free. They pitched it as being free and it would reduce the deficit. We said it wouldn't and now they want more funding for what is this for the IRS. We had three congressional committees investigating the IRS and the Justice Department. Who is going to police them? Drones from the President and Attorney General Eric Holder? You have to give me a break. Nothing is free. We're starting to pay for it.

JONAS MAX FERRIS: You have to pay for it. Don't like it, get the votes to kill it, but don't approve something and then try to starve it of money. Look, this health care thing is very complicated and difficult. That's one of its problems. The IRS has a key role, unfortunately, to lay out the fines for people not getting health insurance. That is revenue enhancing. So to under staff the IRS means you won't have the revenue and it will crumble in on something. I know some want that, but I want someone to pay for it. As far as the approval ratings, they won't get any worse than one out of three because at least one out of three people, this is a gravy train to them.

GARY B. SMITH: If anyone had any idea what is actually in this law, or what the consequences will be, I would say, yes, fund it. Remember Rep. Nancy Pelosi said we have to pass it to understand what's in it. We're starting to understand what's in it. Look, is it a shock to anyone that the government is behind schedule and over budget? Of course not. Multiply that ten-fold with the bottom line costs. We know from the CBO it will cost jobs. We know from case studies in states and other countries that access to medical care will be limited. We've already seen the preliminary numbers that we're still going to have a wide, wide group of people uncovered. And by the way, if you are healthy, you'll be paying higher premiums. So, yeah, I would say cut our losses.

DAVID MERCER: I say you fund what the law of the land is now and stop being obstructionist on to getting out the information as to what the bill does. Let's take the 6 million young adults that now remain on their parents' health care plan that otherwise would not have been, or those that have pre-existing conditions that would be denied health care coverage. That has changed. I think the more that people come to realize that, as well as the implementation of the law come January 2014, you will see those approval numbers change especially with no more attempts at repealing health care, which I think the GOP house has tried 34 times to do, to no avail.

JOHN TABACCO: We have this novel concept in the private sector that you put a proposal on the table, you put a use of proceeds on the table, you say how much something is supposed to cost, and then if the funding that was proposed is there and then you need more, you kind of pull back. If someone came to me and said invest $2 billion in my company and then six months later came back and say we made a mistake, we now need $4 billion, I'd cut off the funding immediately and cut my losses. And I think the thing is overweight, so let's starve it. And if starving it kills it, then I think most of America will be happy.

LAWMAKERS ARE PAYING OFF STUDENT LOANS FOR THEIR STAFFERS; SHOULD TAXPAYER BE FOOTING THE BILL FOR THIS?

GARY B. SMITH: Look, government service is a career choice. And if you think it's easy to get a job in government, you should try to come to Washington, D.C. These jobs here at every level, even if they're unpaid internships, are highly coveted. Why? Because when compared with the private sector, they're working less hours and paid more if you include health care and all those other benefits. If we had trouble attracting people to D.C. to work for government, I'd say, yeah, we need to increase the benefits. We don't. We have more than enough supply out there to meet the demand. The taxpayer should not be on the hook for this.

DAVID MERCER: I can see why this would be part of their benefit package. A legislative assistant making $23,000 a year is having a tough time of it. And is working long hours contrary to what was just said. In addition, I think it is used to attract talent and keep talent. But in the same instance, I think congressional members need to not just deal with their staffers, but with students around the country whose loans are now at $1 trillion and having increased so much, 440 percent in the last 25 years. Something has to be done about that.

JOHN TABACCO: We have the largest government, probably in the world right now, saying we need to incentivize people to come work for us. Right now we're in the middle of an employment epidemic. And to Gary's point, if someone in the government put any federal job in the newspaper and said this job is available at $23,000, there would be a line down 6th Avenue like you couldn't believe. The plan came around in 2002 when the private sector was doing fantastic, so the government wanted a little boost. Now the good talent is all unemployed. We don't need to spend $70 million a year to get the good talent into the government. We need to give the private sector some incentives.

JONAS MAX FERRIS: There is more demand now than there was for government jobs a few years ago. You can't bad mouth it. The private sector does this, also. I think the real crisis isn't that the concept exists; it just appears to be disproportionately used by congressional staffers and other federal workers. That's suspicious.

JOHN LAYFIELD: In 2002, we needed extra incentives. We don't need it anymore. Now it has become a political grab bag. Everybody is sticking their fingers in it. Even those who disagree are using it for their own staffers. I believe it needs to be shut off.