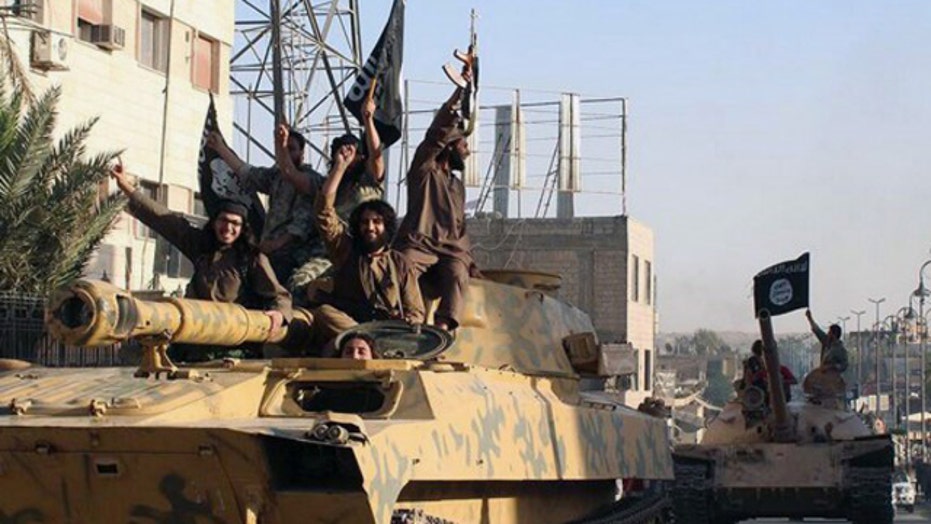 FBI hunting ISIS supporters as threats mount ahead of July 4

How big of a threat is this to our lives and economy?

Gary B. Smith: I think, you know, it's not too much of an exaggeration. We're fighting right now the next world war. And here's the reason. We are now an interconnected society. Terrorists have so much easier way to strike. They can recruit easier. They can hack into government sites like we've seen. They can -- they have knowledge about where our military bases are, how to build bombs and things like that. If the terrorists made a concentrated effort cyber-wise to attack the United States, the devastation, Brenda, to the economy could be just like we had -- we saw in Europe to their economies during World War II. Horrible.

Ashley Pratte: I grew up 40 minutes from Boston in Manchester, New Hampshire. I have tons of friends who live the. I watched all of this happen just in complete shock. And that's what happens with homegrown terrorism. And what we see now is ISIS operating in a space very much online. And that's something to be very, very aware of and very afraid of because the way in which terror is growing is different than it used to be. And I think we have to fear the copycat idea and even some of the sympathizers that were arrested this week near the New York area, you saw the pressure cooker bombs, which is exactly what happened in Boston. And that's become an ease of access far lot of sympathizers. Isis knows the space they're operating in, and that's why they've invested so heavily in social media. I think that's why they're having sadly so much success in getting young, impressionable minds here in the United States looking to take America down, because that is what ISIS is promoting and that's exactly what they hate. And around July 4th, which is, you know, an a iconic American holiday, should be on very high alert.

Jonas Max Ferris : I think the real threat is exaggerated. I think the psychological threat, the fear you might not do something based on irrational fears, that is elevated because of the Internet. Not like the Internet is going to attack us and hack us. These relatively ordinary attacks 50 years ago we never would have heard of has become blown out of proportion. It's like if there's a shark attack, all of a sudden there's a million videos online about the guy getting eaten by a shark even though your odds of getting attack by a shark are extremely small. I saw a quote on the government site. I'm going to -- I’m saving my money for it, bro. I just don't get scared when I see the type of criminal in America that's sympathizing with ISIS is a mastermind that can pull off anything major.

Nomi Konst: Sharks aren't organizing or strategizing with known terrorist group. We have two situations here where we have ISIS that grew out of post 9/11. They're younger, they're technologically savvy and they're hitting a point in American society which is weak. We have a cultural phenomenon right now which is young people until the Muslim communities are feeling disconnected because a lot of the Muslim communities and mosques, a lot of Muslim scholars have said that mosques haven't adapted to the 21st century. So young Muslims are going online, American Muslims going online and reading translations that are just wrong, wrong translations created by ISIS so they can recruit young Americans. That's another problem.

John Layfield: Well, we have an example of that with the "D.C. sniper," how it froze commerce on the east coast. People were putting up tarps at gas stations because they were in so much fear of what they thought was a solo sniper turned out to be two people that it froze the east seaboard because of this act of terror. And I disagree with Jonas. Look, if you have a major fire come through your city like a 9/11 , and then you put a fire prevention program in place and you have a couple small fires, but you look around after 10 years or more and you say there aren't many fires, why do we have fire prevention, it's not a big deal, I think the government has done a very good job. The FBI especially of finding these terrorist plots and stopping them before they happen. I think we can go a step further. What Gary is talking about on the internet that is the big worry, especially the deep web and his software. I think you put some kind of crime stopper type bounty on the people who stop terrorist plans and you offer a reward. You will get so many Americans now. These guys who are in college dropouts living in a garage somewhere in Silicon Valley helping the government. I think that's what the government needs because that's where I think the government is overwhelmed is over the Internet, not just the terrorist plots they thwarted.

Gary B. Smith: We live to the letter of the law. Look, you know I am not a big fan of government and the restrictive laws they make. But I abide by them. I mean, if you don't like the laws, you change them. So we have these illegal by definition immigrants that are here. What do we then do? We say, okay, we're not going to follow the law, no, you deport them back to where they came from. That's what the whole program is set up to do. I'm baffled on this one.

Nomi Konst: So we have two issues here. We have the situation with criminals, which I agree with Gary, we should either lock them up -- I don't know if they're coming back through or if there's some way to block them working with other governments. I'm not as familiar with I.C.E. And how they track these illegals they release after they've been in prison. But the other issue is we have a human rights situation in central America and what I’m more concerned with is how is it we've exported our dirty work to Mexico so that they can deny all of the central Americans seeking asylum? A much higher rate than America. And without a profit. I'm concerned about that. The reality is that the criminal element is a very small element and that should be dealt with the law.

John Layfield: Do you know how small an element that is people losing family members to murders to people who have been arrested and released? You can't deport 11 million, 12 million illegals. At least listen to what I’m saying. You can't deport that many, but the ones that have committed crimes, I’m worried about human rights in the United States. I don't care where you send them. Get them out of this country. Those guys are a danger to our society.

Jonas Max Ferris: First of all, the best part about this news is that Mexico is doing our dirty work. I think outsourcing this job is a good idea. They'll do it cheaper and possibly not the way we would do it, and that's why fast and cheap and that's why it's working. That's a good move we made. As far as the criminals, lawmakers might get hopped up about a thousand people doing crimes. Forget the illegal thing for a second. That's a buzzword to not get you thinking about the math. There's 30,000 some odd illegals. 75 percent of people in the U.S. Are back in jail within five years. If you statistically want to be safe, don't let U.S. citizens out of prison. Let all the illegal immigrants out of prison. If you want to feel good, do something with the illegals criminals because you'll feel better about it. Statistically speaking, U.S. citizens are much more likely to do crimes, much more, like ten times more likely than these illegals.

Ashley Pratte: I think the point here is to really kind of realize that no matter what ideological beliefs that we all have, the point is if you break the law, you go to jail, you serve your time. And, you know, putting murderers on the streets because of overcrowding of jails, which, you know, we've discussed this before at length, I think is important to kind of mention here as well. That is a significant issue, and I think when we have such an overcrowding, we're re-releasing people into the streets who can potentially harm anyone here. Doesn't matter where you're from, you know, what country you live in or who you are. I think we have to abide by the law here and say, you know what, enough is enough and try to find a way to, you know, navigate that system here at home.

John Layfield: Comedy class is as big a waste of time as poetry and Shakespeare. You go to comedy class, you won't be the cable guy. He drops out. Who will teach his class, Chris Rock? College holds people for four years because it is simply a money grab. We're not getting people well versed to be there in life. The reason is a lot of it is because of stupid tenure keeps a lot of these guys in la-la land.

Nomi Konst: If we have a serious conversation about reforming education, Scott Walker is the last person I’ll ask because he doesn't have a college education

Gary B. Smith I don't see there's any difference between getting a degree in comedy or dance or music. I'd rather have more comedians out there than some other professions. Third, I think colleges should be allowed to do what they want to attract and keep talent. The bugaboo in all this is that it gets so much government funding. If they were allowed to stand more on their own, let them do what they want.

Ashley Pratte: I think it's -- comedy is the least of our worries. Half the courses being taught in colleges, and the daily collar puts out the most ridiculous, and that is a laugh. That's where we should be focusing our time here. It doesn't matter what you major in. If you're not prepared out of college for the real world and can't tackle a down economy and get a job, that's the real issue.

Jonas Max Ferris: I did an economics undergrad. That was comedy back in the day. The truth is computer science and everything else, and once you're doing everything else, they're all about the same value. I think comedy is relevant, is income producing compared to some things maybe more than poetry, and there's a legitimate history of comedy. So I don't think this is a joke actually.

John Layfield: Greece's loss is our gain! (VGLT) up 10 percent in 1 year