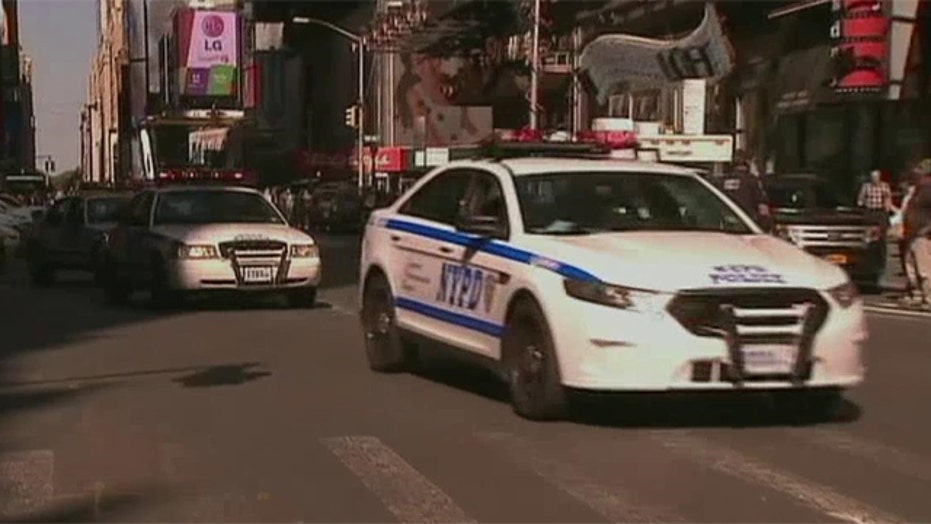 US on High Alert as FBI, DHS Warn of Possible Terror Attack Tied to July 4

John Layfield: Look at specifically what happened on Tunisia on the beach -- a Western beach, a holiday beach -- specifically targeted to disrupt the Western Tunisian economy. Very similar to what they would like to do here.  I don't want to be an alarmist. Next week we have the caliphate declaration anniversary and July 4th, two big events that are occurring in just a matter of just the next week that is going on. And you look at what happened post 9/11, the two to three trillion dollar of expense caused to our economy, not to mention the thousands of lives lost that day and in the war on terror following that. It's so much better to prevent this from happening than it is to have to react to it. I think our FBI and Homeland Security has tone an exceptional job of stopping these terror attacks from happening so far.

Jonas Max Ferris: I do because they don't really control weapons of mass destruction or armies, there's just a few people. They have to hit the economy because you can scare people into changing their behavior. You can't kill a few million people with knives and propane tanks. The ratio of terrorists or wannabe terrorists in America to actual citizens is so astronomically wild they couldn't do a lot. It's like buying a lotto ticket and changing your behavior because you might win. It's that absurd not to do something because of the threat of terrorism in America. Africa, there are more terrorist wannabes than in America. We just don't have that many here. We shouldn't have to worry as much in other countries. I think people need to calm down about the actual risk of terrorism and let law enforcement and the FBI do their business.

Gary Kaltbaum: Look, we are a resilient bunch and unless it's some sort of a 9/11 attack, which is as john said, really had a major effect and unless there is a slew of attacks in areas like the malls or the movie theaters that really affect people and how they feel about what they do on a daily basis, I think everything's going to be A-OK. If something does occur, just remember, we will remember, we will get them, and then we will move on and then we'll go back to business again. I don't think the economy takes a hit at all.

Sascha Burns: You know, the whole point of terrorism is instead of having militaries fighting each other so it's to make everyone feel it can happen anywhere anytime. I agree with Gary K. You don't allow it to happen. You don't let terrorists affect how you live your life. You go to your 4th of July. I do sigh a breath of relief on September 12th, but we just go on with our lives.

Gary B. Smith: I'm surprised we have such Pollyanna's on the panel other than John; they're all like whistling while you work. I want to go back to some of the economic consequences. For only a half a million dollars, Al Qaeda caused, as John pointed out, $3.3 trillion hit to the economy. Now, you say all right, well, ISIS is not going to hijack planes and go through all that stuff. Well, look at in 2002, I was living here in D.C., we had the D.C. Snipers. Two idiots driving around in a car pretty much shut down the city and the suburbs for about 2 1/2, 3 weeks. I know it because my kids were in high school and we canceled high school sports that were outside. I'm sure a lot of other company picnics, really anything that you had to go do outside was shut down. So we could all say, oh, we'll recover, we'll move on. I get that. But we didn't in D.C. For about 2 1/2 weeks. If it was something bigger it would be even worse.

Gary B. Smith: Absolutely, Brenda. When the government sticks its finger in an economic dike looking to shore it up here and there, we have less choice. We've seen that across -- in fact, we've seen that already in health care. Government has been involved in health care through Medicare, Medicaid for years and years and years. People have longer wait times, they have less choice. If you don't think that's true, look at the only area of health care that is close to a free market and that's elective surgery, plastic surgery, most people call it. There you have the broadest choice, the best availability; you see prices advertised across the board. Doctors compete. That's why plastic surgery has actually in cost come down where health care has gone up.

Sascha Burns: I would disagree. I don't think we're putting it in the hand of government at all. I think we've been hearing for five years that the world was going to end because of Obamacare and it hasn't happened. It's actually successful. The insurance companies are doing fine, the providers are doing fine, people are covered for the first time ever, and people with pre-existing conditions can get health insurance. It's not going to lead to the collapse of our health care. It's just not.

John Layfield: You have about 50 million people that were uninsured before, 6 million that have gone on some type of ObamaCare, about 10 million to 11 million people that went on Medicare and the other 35 million, 45 percent of those say they don't want the insurance because – I do this every once in a while with a doctor. I have a deductible. I said will you get me in for cash? You have a lot of people that are doing that right now in this economy so you're seeing a lot of doctors come offline because of that. Imagine what we did. This was not health care reform. This was insurance reform. Off company, health care, that is broken and all you do is stick in 17 million more people, you're not going to fix it by volume. All you're going to do is make matters much worse. That's what it's done. If ObamaCare is here to stay, fine, but fix it. We have not done anything to fix health care.

Jonas Max Ferris: I don't think you can characterize it as not being in the hand of government. A lot of it is through Medicaid, expanding, that said it was in the hands of insurance companies which had a similar effect to some people before. There's definitely winners and losers. If you didn't have insurance, a long line for service you're not paying for yourself that subsidized is definitely a quality improvement. You can't deny that. If you had a Cadillac insurance plan as a union person or hedge fund guy you're taking a step down, no difference about it. It's going more in a cash direction; i think that was brought up by Mr. Layfield, that's a free market. We've never really had that. There's no law against paying someone cash and they can come up with their own fee and you can dodge all this garbage with whether it's the insurance companies doing it or the government setting the rates for Medicare or Medicaid. You can just say when are you going to get me in, I'll pay for it. I think the middle is where you're seeing compromises of lines and waiting because they can't afford to go cash because they're too wealthy.

Gary Kaltbaum: There is a simple outcome here. Tons of doctors are turning down insurance, they're turning down procedures because they are not getting paid what they used to get paid. On top of that, you're adding all these people into the mix and try get an appointment. Hey, Mr. Doctor, I broke my leg. Oh, see me in seven weeks. This is the outcome and it only gets worse as we move forward.

Sascha Burns: When the first report came out a lot of the leadership at the IRS was forced to resign. Depending on what happens here, that may happen again and rightly so if, as it seems, there is wrongdoing, although you can't underestimate bureaucratic incompetence. So whether or not it was incompetence or something nor nefarious, they have said no one outside of the IRS or we should say no one in the White House, is what the point is, had any knowledge of this.

Gary B. Smith: The fact of the matter is a lot of people do that. And I am actually not surprised. This is human nature. You're caught red-handed. You're going to try to it up. We had a president of the United States lie on oath to the public and he was not impeached. If we're willing to tolerate that, i guess we can tolerate this. The bigger problem is why do we give the IRS so much power to delve into our political lives? That's the overriding -- get it so we can pay tax on a postcard, we'll be good.

Gary Kaltbaum: Three words -- obstruction of justice. The amazing thing to me, how come is reporters aren't on top of this in a big way? This would be front page if it was a different administration and Republican Party. It is sickening to watch this and nothing getting done.

Jonas Max Ferris: Don't confuse incompetence with malice. You know what the IT systems are like in the IRS? Probably big floppy drives. There could be a coincidence that's how they operate, so let's cut them some slack. To Gary's point, the fact they have discretion to choose, that's the law's fault. There shouldn't be tax-exempt organizations. They don't have the staff to figure out who that is. Don't give them that power, wouldn't be a problem in the first place.

Gary B. Smith: US motorists setting a driving record! (XOM) gases up 30 percent by December

John Layfield: Ryder picks up with the economy! (R) drives up 20 percent in 1 year

Gary Kaltbaum: When in doubt, go for pizza! (DPZ) delivers a 20 percent profit in 1 year