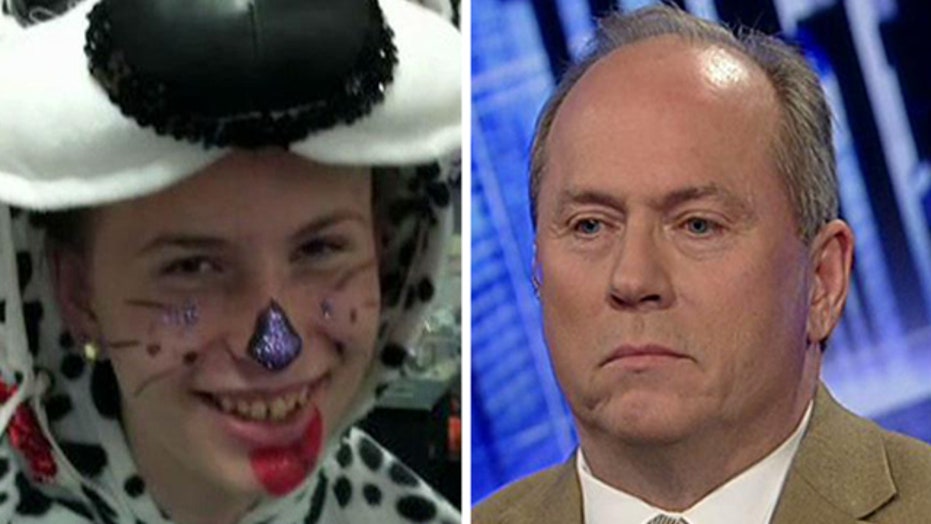 Father on losing custody of daughter over medical issues

Lou Pelletier says his daughter's life is at stake

This is a rush transcript from "The Kelly File," February 20, 2014. This copy may not be in its final form and may be updated.

MEGYN KELLY, HOST: New developments tonight in a legal fight over medical care and who is really looking out for a sick 15-year-old girl. Justina Pelletier was diagnosed with mitochondrial disease by doctor at Tufts Medical Center in Boston a few years ago, and has under gone surgeries and treatments for the illnesses ever since.

Then a little more than a year ago, her parents checked her into Boston Children's Hospital. The doctors there said she did not have a mitochondrial disease. Instead, they said she has a psychological condition, and that Justina's symptoms were all in her head. That hospital then accused her parents of medical abuse. The state stepped in and a judge awarded custody of Justina to the state. The court then went a step further, ordering her parents not to talk.

But now, they breaking their silence. Lou Pelletier is Justina's father and he joins me now. Lou, very good to see you.

LOU PELLETIER, JUSTINA'S FATHER: Megyn, thank you for having me.

KELLY: Why now are you breaking your silence despite what could be repercussions from this court?

PELLETIER: Bottom line is, my daughter's life is now at stake. This has been one year that she's been at Boston Children's Hospital. She has been tortured physically and mentally. All her medical situations have been totally ignored, medicine she was on, treatments that she has been dealing with. She is at her breaking point, and we can't stand by anymore and allow this to happen.

KELLY: You, as I said in the introduction, brought her to Boston Children's. She had the flu, they said take her there because her former doctor from Tufts is gonna know what to do and he went to Boston Children's. She goes into the hospital, and I told the viewers what happened then. How long did it take -- just in terms of the timing -- how long did it take for the state to step in and say you no longer have any decision making authority over her?

PELLETIER: The world changed the day when -- she was there February 10th. February 13 is when they came in and said you are no longer allowed to speak to any other doctors. There will be no more diagnosing going on. We're just shutting everybody else out.

KELLY: And from that point to this, how often does the State of Massachusetts permit you to see your daughter?

PELLETIER: Officially, right now, one hour a week, Friday afternoon at 1 o'clock, and one 20-minute phone call Tuesday mornings at 9:30.

KELLY: Are those supervised?

PELLETIER: Totally supervised, and limited as far as scope and conversation.

KELLY: They are treating you like you have been physically abusing your daughter. That seems to be how they're approaching this case, suggesting that all the surgeries you got for her and so on were unnecessary. I presume -- tell me, you were told those things were necessary by the doctors at Tufts.

PELLETIER: Everything that was done to Justina was medically approved, medically verified, and insurance-approved.

KELLY: So, you had a difference of opinion from the doctors at Boston Medical versus the doctors at Tufts. When you were in the court case, fighting for custody of your daughter, did the doctors at Tufts step in and say, whoa, judge, whoa -- this is real, this isn't child abuse, and don't give her to a set of doctors that does not believe she has this mitochondrial disease, because we are telling you she does.

PELLETIER: Both. The doctor that sent her there said point blank she has got mitochondrial disease, and the doctor that she went to see who was blocked from seeing her, went along with that saying the same thing. She's got, you know, this disorder.

KELLY: If she doesn't have the disorder -- if the doctors at Boston's Children are correct, it is all in Justina's head, then after a full year, we would expect her -- I think to be improving. When you see her, is she improving? Do they still have to give you reports about her prognosis and her improvement?

PELLETIER: We're getting no medical reports. We haven't gotten those in months, but you just have to watch what you see in front of you. December of last -- of 2012, she was figure skating, going to school, playing with the dogs, living the normal American dream. Early February, she gets the flu, and when you have mitochondrial disease, it just hits you worse, which is why her doctor Tufts said we need her to see her GI doctor who unfortunately the month earlier transferred from Tufts to Boston Children, and thus, nightmare began.

KELLY: When you see her now, how is she?

PELLETIER: She is paralyzed below the hips pretty much, almost no body strength above. They totally ignored any of the medications that she should been on. They've taken away from her what they call vitamin cocktail that they give the mito patients. So, she is just rotting.

KELLY: Lou, you know, I know there is a question about who is right and who is wrong, and the judge clearly sided with Division of Child and Family Services, but giving you the benefit of the doubt of the purposes of this interview, how does this happen in the United States of America?

PELLETIER: You have a hospital that knows the system of how to use DCF to do their bidding. All they have to do as a mandated reporter, they can say anybody is not following their protocol.

PELLETIER: I could give my guesses -- medical research. Remember, they came up with this diagnosis of somatoform within 12 hours of her arrival.

PELLETIER: Correct, without speaking to the doctor that sent her there, without speaking to the doctor she came to see, without looking at her medical records. They just came up with this diagnosis. And they wanted us to sign on the bottom line hook line and sinker that she had this. Somatoform takes months to years to diagnose, but they didn't look at it that way. They just came in within 12 hours, came up in the diagnosis, and then which they do over, and over, and over.

KELLY: And your family has been living hell ever since.

KELLY: My interview with Lou Pelletier continues right after this break. Why he says his knees now buckle when he sees his daughter today.

KELLY: And now, part two of my interview with Justina Pelletier's father on his fight for custody of the 15-year-old who has been in state custody for more than a year now.

KELLY: You have unbelievably also been told not to talk by this judge. Where -- did you challenge that, where does a judge get off telling a parent you're gonna lose custody of your child, over your objections, over the objections of her old doctors and then you are not allowed to say anything about it?

PELLETIER: It boggles the mind, especially since this story was public with one of the largest -- the largest newspaper in Boston, had been covering this since April. They've gone to the courts. They have gone to the DCF, to the Boston Children's Hospital, so everybody knew about this case. It wasn't until November -- officially November 17th -- when the local Fox in Connecticut aired it that the gag order came out because Boston Children's was up in arms. Nothing was done prior to that.

KELLY: Are you worried about consequences to you in speaking out?

PELLETIER: I'm saving my daughter's life. I'm not worried about the consequences to me.

KELLY: We reached out to DCF. They say look, the court has instituted a gag order and we can't provide information on children in our custody and Boston Children's said as follows.

"Boston Children's Hospital is deeply concerned by misinformation surrounding this case but the hospital unable to comment on specific patient care matters. Though we are required by state law to report cases of suspected child maltreatment... DCF is solely responsible for investigating those reports and for deciding whether to go to court to request temporary custody."

They put it all on DCF. Your thoughts on DCF here, Lou.

PELLETIER: Well, first of all, as I've said, they're being used as the foil for Boston Children's Hospital. Number one, everything that's been done to Justina has been medically verified. There's nothing that was done -- you know, Tufts knows -- somebody said it's not Bob's hospital. They're one of the top facilities in the country. She was being treated by one of the number one or number two mitochondrial doctors in the country, so they know what they were doing. This didn't happen overnight. They -- they have been working with her for two years and she has been fine. She's been like I said, going to school, ice skating, doing everything. In December, she was in three different ice skating shows. On January 23rd, her grandmother's 93rd birthday or 92nd birthday, you know, she was skating.

And a year later, she is paralyzed below the hips, in pain 24 hours a day. Every time I see her, my knees buckle. I cry after. My -- it's -- it's just tearing apart our family. There is no reason why somebody in this country couldn't stop this and said time out. No matter what you think Boston Children's may be right or wrong, and obviously, you know where I stand, somebody should have said time out, let's take an independent look at this because this is -- this is out of this world.

KELLY: This is incredible. I know her older sister also has the same mitochondrial disease, and yet, that was not persuasive to the courts, Lou. We will continue to follow this, and thank you so much for being with us.

PELLETIER: Megyn, thank you so much.