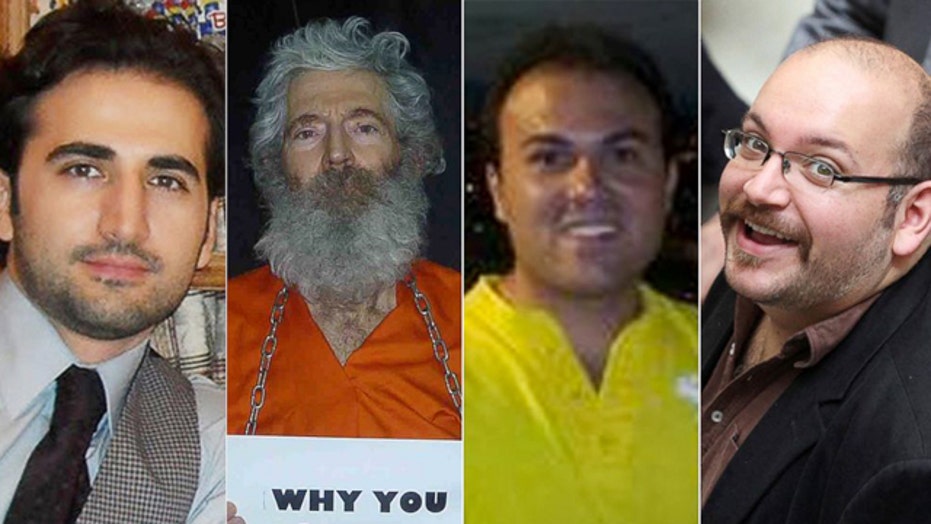 Kin of Americans held in Iran unite: The time is now

The families of Bob Levinson, Amir Hekmati,Jason Rezaian and Saeed Abedini - four Americans imprisoned in Iran - take their case to Congress, urging lawmakers to fight for their release. #FreeAllFour

This is a rush transcript from "On the Record," June 2, 2015. This copy may not be in its final form and may be updated.

GRETA VAN SUSTEREN, FOX NEWS HOST: Four Americans - a marine, a journalist, a pastor and a former FBI agent - are all being held in the Islamic Republic of Iran tonight, three of the most vicious, dangerous prisons, the fourth location unknown. Tonight, the family is saying it is now or never to bring these Americans home. Earlier today, the son of former FBI agent, Bob Levinson and the wife of Pastor Saeed Abedini went On the Record from Capitol Hill.

VAN SUSTEREN: Nice to see both of you although someday I hope we see under very different circumstances. You want your husband released from prison in Iran he's about three years.

VAN SUSTEREN: And your father has been missing in Iran since March 2007, eight years.

VAN SUSTEREN: I know since I haven't given up on the stories, you don't intent to give up on this.

D. LEVINSON: Never, we never will until he's home.

NAGHMEH ABEDINI, WIFE OF PASTOR SAEED ABEDINI: We can't give up, every day I try until he's home.

VAN SUSTEREN: I know your kids and I know your mother. It's incredible. The story keeps dragging on. I can't even imagine how painful is this, how do you describe this?

D. LEVINSON: Every day is like a nightmare, it's just so hard for us because -- especially the longer it drags on -- the depression of knowing how he is suffering much worse than we are. All he wants to do is to just get back home to his family and everybody he knows and loves.

VAN SUSTEREN: And you've had a proof of life from April 2011.

D. LEVINSON: Yes and six months before that we had a video so we had photos and videos but nothing since 2011.

VAN SUSTEREN: You know who was holding him?

D. LEVINSON: No, we don't, that's the big mystery.

VAN SUSTEREN: And your husband, a Christian Pastor, a convert he Muslim converted to Christianity and so now he's sitting in that horrible prison for eight years.

NAGHMEH ABEDINI: He's given him eight years it's almost three years he's been in prison and like he said the years make it harder. It's harder as the years go by and this is as we were in the Congress today. These few weeks are very crucial. We make sure we don't leave the Americans behind before we sign any deals.

VAN SUSTEREN: And of course the deadline is June 30th, at least so we understand. What do you want Congress to know?

D. LEVINSON: We think had a really constructive hearing this morning and we want to make sure it's not that it's not forgotten and that they understand and the administration understands and the Iranian government understands. During these nuclear negotiations that this is the time, this is crunch time because there are only a few weeks left whether the deal happens or not and this is the time that our governments are talking and engaged and this is the chance that they both have them to bring people home.

VAN SUSTEREN: I feel like I'm banging my head against the wall on this story. Because no matter how many times we do it your husband still sits in that prison. I can't imagine what it's like for you.

NAGHMEH ABEDINI: Exactly how I feel, I have been before the Congress three times now. I'm hoping every time that this is the last time and next time and I'll be with my husband but it's frustrating because Iran can show good faith effort that we can trust them in other things. This would be an easy thing for them to do to show that -- to start building relationships and that we are not aggressive enough to demand the release of the Americans before even further discussions. It's frustrating. I really hope this is the last year that all of our families have to continue to live in this nightmare.

VAN SUSTEREN: Does the state department given you any indication that Iran is listening, that they are at least considering the fact that if they sign this deal, they're saying they can keep a promise, show good faith on it but yet they are holding Americans, we know for sure your husband. We don't know about your father.

D. LEVINSON: We had been hearing -- it sounds like the families are hearing the same thing that it's being discussed on the sidelines. We don't know if it's being discussed, they don't tell us this information so we can only hope that they are saying the right things and that the Iranians are listening.

D. LEVINSON: Any sign we would be over the moon, just at least know he is alive and the next steps that we can take to bring him home. But it's been quiet for years now.

VAN SUSTEREN: Last time you communicated with your husband pastor was when?

NAGHMEH ABEDINI: I'm not allowed to.

VAN SUSTEREN: Not at all?

NAGHMEH ABEDINI: No. The Iranian government has not allowed -- his father gets to communicate with them and his father saw him a couple days ago.

VAN SUSTEREN: And his health is what, your husband's health.

NAGHMEH ABEDINI: He continues to have internal injuries and again there's no clean water, and not enough protein. As I mentioned today in Congress, the psychological warfare and his psychological health is my biggest worry. I don't know what to expect when he does come home so time is of the essence.

REP. DAN KILDEE: It's a very simple stand up resolution said that Iran needs to release the American that it holds if it thinks it could be accepted into the global community. It passed the house foreign affairs committee in the unanimous vote and we hope Congress will do the same very soon.

VAN SUSTEREN: And U.S. Marine Amir Hekmati is one of those prisoners held in the notorious Evin Prison. Amir's sister Sarah Hekmati and his brother, Dr. Ramy Kurdi joins us. Good evening to both of you. We have spoken many times about this, I have been to your home. Sarah first, have you heard from your brother?

SARAH HEKMATI, SISTER OF MARINE JAILED IN IRAN, AMIR HEKMATI: Yeah he called me last week and he's been able to speak with my mother for short increments once a day and he is really losing that stamina, that endurance that he had, he wants to hold on to hope, he wants to also feel like there's action being taken to release him. We have only so much information we can give him.

VAN SUSTEREN: Dr. Kurdi, is there any indication that Iran is even thinking about releasing Amir or is this even dangling in the formula with this June 30th deadline?

RAMY KURDI, BROTHER-IN-LAW OF MARINE JAILED IN IRAN: We're not privileged to communicate with Iran. Right now most of our information is from the state department and they sit across the table from Iran. We do have an attorney in Iran who is a human rights attorney, he's been very active and vocal. There is a lot of hope, there is a lot of opportunity, and there are different outlets that Iran can take. We are just hoping they will take one of them as a humanitarian gesture soon.

VAN SUSTEREN: Does Amir know about this June 30th deadline? Did they say anything given the prisoner talk about it at all?

HEKMATI: Absolutely and that's one of the things that we've got intention of the state department is that is much as we keep things separate -- Amir does not want to be used in this negotiations that his release should be unconditional regardless of the outcomes of these talks. That is something that we feel he has been strung along and his case is stalled in this process because of that.

KURDI: Right now we only imagine after a hunger strike they endured for almost a week, he is malnourished. He doesn't receive the amount of protein. Just like the pastor's wife described, all the prisoners there sound like they're malnourished and we are concerned about his health. He has had lung infections, he has had other problems. He calls about and complains but he doesn't talk. He is not a complainer. We are not going to know how he is until he gets home.

KURDI: From our stand point, there is a political storm surrounding the nuclear talks. As a family, we pushed strongly to be not political and we've had bipartisan support for his release. The state department doesn't quite divulge any information, we've not had any breakthrough suggestions. The nuclear talks I have been hinted at we hope that they will have a good outcome for Amir. Our standpoint they're irrelevant, Amir should be home.

VAN SUSTEREN: Amir indeed should be home and I agree, I look forward to that day. Anyway, thank you both.