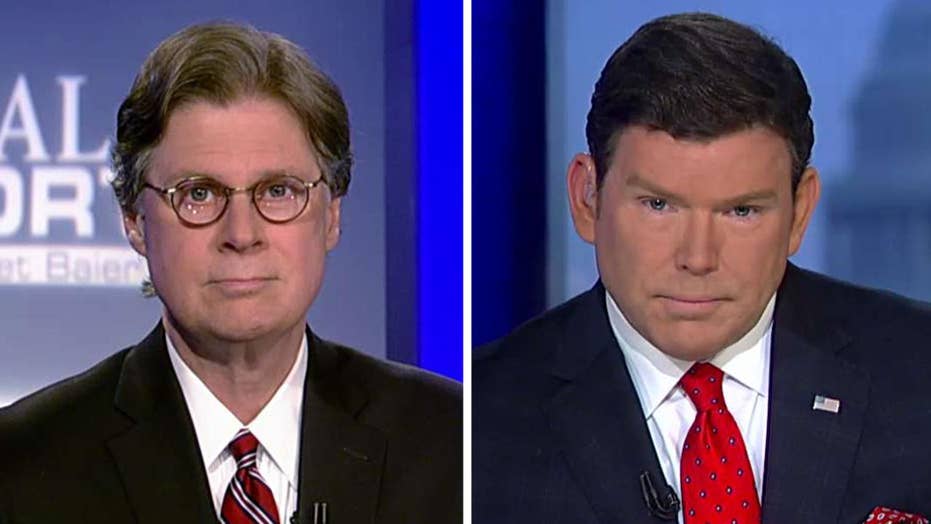 Fallout from Ryan's decision not to seek re-election

Will the House speaker's lame-duck status hurt the GOP in the 2018 midterms? Reaction and analysis from the 'Special Report' All-Stars.

This is a rush transcript from "Special Report with Bret Baier," April 11, 2018. This copy may not be in its final form and may be updated.

SPEAKER OF THE HOUSE PAUL RYAN, R-WIS.: Today I am announcing that this year will be my last one is a member of the House. To be clear, I am not resigning. I intend to full my serve term as I was elected to do. But I will be retiring in January.

You all know that I did not seek this job. I took it reluctantly. But I have given this job everything that I have. And I have no regrets whatsoever for having accepted this responsibility.

The truth is, it's easy for it to take over everything in your life. I just don't want to be one of those people looking back on my life thinking I spend more time with my kids when I know if I spend another term, they will only know me as a weekend father.

BRET BAIER, ANCHOR: Speaker Paul Ryan saying he will not seek reelection. The president tweeting out soon after that announcement, "Speaker Paul Ryan is a truly good man, and while he will not be seeking reelection he will leave a legacy of achievement that nobody can question. We are with you Paul!" The president is actually with Paul Ryan currently. He's having dinner at the White House along with Senate Majority Leader Mitch McConnell, Kevin McCarthy, and Senator John Cornyn. As far as possible replacements when the speaker does step down, you've got Kevin McCarthy and Steve Scalise who are kind of jockeying out for position possibly to be the next speaker or, if Republicans lose, the next minority leader.

Let's bring in our panel: Byron York, chief political correspondent for The Washington Examiner; A.B. Stoddard, associate editor at Real Clear Politics and host of "No Labels Radio" on Sirius XM, and Eli Lake, columnist for Bloomberg View. A.B., a lot of people were surprised by today the announcement but maybe not surprised that he was going to make this move eventually.

A.B. STODDARD, REAL CLEAR POLITICS: I think a lot of Republicans, we didn't expect him to be speaker again. I think a lot of Republicans assumed that Paul Ryan was going to run for his seat, wake up the morning after Election Day, count the losses, and quit. And that would be the cheap thing to do and it's just not like Paul Ryan and he couldn't stomach doing that. His district really comes first.

The kid thing is real. Actually wanting to be with his children who have never known him living at home fulltime is real. But that said, I cannot - - his fealty to what was the Republican Party really cannot be overstated. He really wants to put everything into an effort to mitigate the losses to the House Republican majority this fall. He will not be untethered and he will not be liberated. He will not be criticizing the president. He will do everything he can until the last hour to try to make sure they hold the House and keep the losses to a minimum.

BAIER: And Byron, it is as of tonight seeming like it is more of an uphill battle to do that, to hold on to the House. You have 26 retirements, 13 running for other office, three seats are vacant. So now you are at 41 Republicans, including now the speaker not running for reelection. And the Democrats need to pick up 25. So it's getting tougher.

BRYON YORK, WASHINGTON EXAMINER: This is not the sign of a party that's working well or working smoothly. And even if you put the president's troubles aside in his relatively low approval ratings, just the historical trends are terrible for Republicans. Bill Clinton lost 54 seats in his first midterm. Barack Obama lost 63 seats in his first midterm. It didn't happen to George W. Bush because of September 11th. This is not looking good for Republicans now.

And the other thing is in the course of less than three years, two Republican speakers of the house have just bailed. They just up and quit. John Boehner did it in late 2015. That's how we got Paul Ryan, the speaker. And I think that speaks to the fact that it is very difficult to control the faction-ridden House of Representatives GOP caucus. You've got the Freedom Caucus. You've got the Tuesday group. You've got a bunch people. You don't have a huge majority, and it's tough to get to get 218 votes out of them.

ELI LAKE, BLOOMBERG VIEW: I think that you look at the election of Trump and then to this date, and you are saying that's the arc of the transformation of the Republican party. Paul Ryan is an emblem of a Republican Party that was against deficits, was for lower taxes, was -- certainly, there's always a popular appeal but is not the same kind of populist as Trump. And now the GOP is really Trump's party. And that is I think a significant thing when we take a step back and widen the aperture.

BAIER: Let's listen to the speaker and the majority and minority leader on upcoming months what could come.

RYAN : I want to be clear. I'm not done yet. I intend to run for the tape, to finish the year.

SENATE MINORITY LEADER CHUCK SCHUMER, D-N.Y.: If he is willing to reach across the aisle, he'll find Democrats willing and eager to work with him. I say to speaker Ryan, let's work together.

SENATE MAJORITY LEADER MITCH MCCONNELL, R-KY.: I look forward to collaborating closely these next months to implement more of the inclusive pro-growth, pro-opportunity agenda the American people are counting on us to keep advancing.

BAIER: They put it in speeches, A.B., but let's be real. What is going to happen between now and November legislatively on Capitol Hill?

STODDARD: Nothing. And they know that. Again, I want to return to my first point. He's not going to do anything in his final months that would potentially -- everything will be seen through the prism of what will depress Republican turnout in the midterms, and that is a real fear.

YORK: Liberated to distance himself from Trump as his instinct has been at times?

STODDARD: I actually don't think so because he's going to do everything he can to try to help the Republicans hold on to the House. As for some bipartisan immigration legislation that he once would have championed, I also think that is going to be seen through the prism of what will depress Republican turnout in the midterms.

They are talking about a rescission package. Give me a break. To take back the spending that was just the Democratic spending in the last omnibus that Trump threatened to veto in the last hour, I don't see that happening either.

YORK: The only reason to be really cautious and modest about talking about this blue wave that's maybe coming in November is what happened in 2016. The fact that Donald Trump won the White House on a day in which his personal disapproval rating was 60 percent. So if, in fact, things don't operate the way they used to do, perhaps that's a real possibility.

But the numbers I was talking about, the historical numbers, the losses with presidents in their first midterm, they really are real. And barring some big event that we don't know about yet, it seems hard to imagine that they wouldn't happen again.

BAIER: And last word on the jockeying for position. Is it Kevin McCarthy's to kind of position or is Scalise in the game here to do you think?

LAKE: I think it depends on the perception at this point about how bad that loss is going to be in the midterms. And I think, remember, Kevin McCarthy had a chance to run, and he declined to do it the first time around which paved the way for Ryan. And I would imagine that at this point even though he has the inside track, Scalise probably has the wind at his back so to speak.

BAIER: Do you buy that?

STODDARD: They don't know what this leadership ejection is going to look like until they wake up the day after the election and people start doing a blame game. Blame Trump, blame the tariffs, blame this, blame that. They have no idea. So they are going to run the race privately in the months to come, but it's going to be a different race after November.

BAIER: Yes, and we'll be cautious here because there is a long way to go before November.