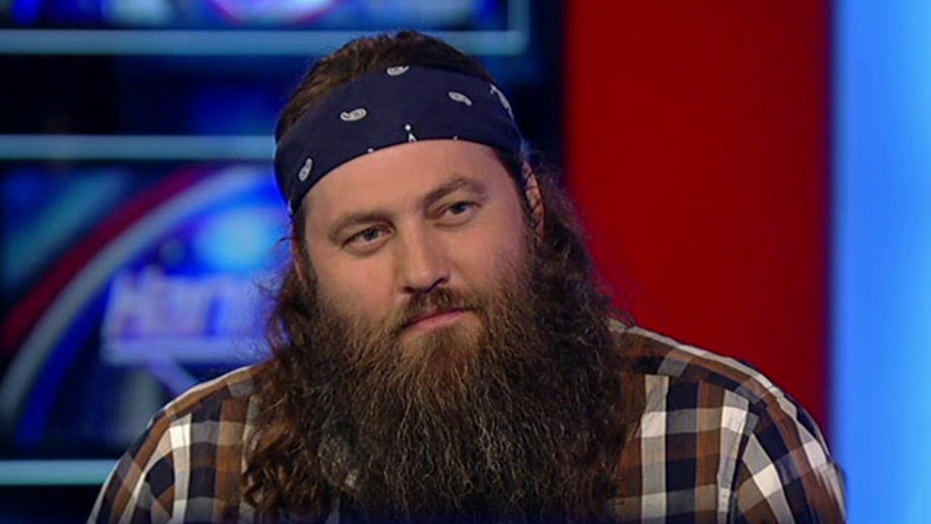 This is a rush transcript from "Hannity," November 21, 2014. This copy may not be in its final form and may be updated.

SEAN HANNITY, HOST: Welcome back to “Hannity.” "Duck Dynasty's" seventh season kicked off on A&E this past week. And now the most-beloved bearded man in America is working on a brand new project, a musical. And earlier, my friend, Willie Robertson, dropped by to explain it all. Take a listen.

HANNITY: He is not the patriarch, but like the second-in-command, he runs the business. Willie Robertson, how are you?

WILLIE ROBERTSON, "DUCK DYNASTY": Good morning there. I've got the beard. How are, Sean.

HANNITY: So you got the new show starting.

ROBERTSON: Yes. We start in Scotland trying to find our family roots.

HANNITY: OK, but the last time you took a family vacation you guys were in Hawaii and your dad never left his bedroom.

ROBERTSON: That shouldn't surprise you. He actually got out more in Scotland. He wanted to see all the old stuff. We went out and toured around and saw some things. It was a funny show. We had a great year this year. It's a great season. I think we kind of got back to doing some of the older things we did. It was fun. It was a good year.

HANNITY: You're going to start in Vegas, a musical, "The Duck Commander Family Musical."

ROBERTSON: It's the next logical step for us, right? Going into theater? Come on. We've done a Christmas album.

HANNITY: We have “Hannity” radio, “Hannity” TV show, that's it.

HANNITY: Is this something that might even go to Broadway?

ROBERTSON: You never know. It could.

HANNITY: You're going to start in Vegas.

ROBERTSON: Yes, starting in Vegas, hopefully on Valentine's Day. And tickets will be on sale soon, and we'll get it going.

HANNITY: Where do you guys stand in terms of the controversy got so big, so fast? Does it come up anymore?

ROBERTSON: It came up when the musical was announced and it came out there. You know we had them look at that and see what it was. My father said some stuff over a year ago. And some of it, I mean, some of it, you know, the family doesn't agree with, morphing into bestiality. I think it was a misstatement. So we tried to clear that up.

I've been here building bridges and so the people I've met in the theater community were fantastic and they're great people. And so we sat down, and I think that is what theater does. It brings different parts of different people together.

And so here I am, working on a big musical. And it's the strangest thing when you're watching your life play out on the stage. It's incredible. I can't --

HANNITY: So did they ask you about this? Was it a concern? New York is a liberal place. It's not West Monroe, Louisiana.

HANNITY: As you know, it's not.

ROBERTSON: I don't think anybody in New York has ever shot a duck or knows --

ROBERTSON: I haven't seen a lot of camouflage there.

HANNITY: Was anyone concerned about that? Did you have to --

ROBERTSON: No. What we're trying to do is -- it's an incredible story. And so we just wanted to show this story from rags to riches. It was so rich there because there were so many times in our lives and how we grew up it could have went terrible. It could have went south. There is no TV show and all that.

And so the way we're doing it is so cleverly. And we realize that it's funny that we're in this, but it's a moving thing and it moves and it inspires. And when we saw it we were just blown away. So hopefully when I actually see it live and real I don't cry the whole time. In rehearsal I just cried the whole time watching it.

HANNITY: Did you really?

ROBERTSON: Yes. It really is more about seeing mom and dad and working through all that because all that is covered in there. It shows Cory and I when we get married and we're dating. So it just brings back all these memories. And I'm proud of what we've done, and so I think it's going to be a great show and I know a lot of our fans are going to want to go see it.

HANNITY: I think it will be a big success. You get people from all over the country that want to go to New York. I want to get out every day as quick as I can. I don't get to go hunting with you because you never invited me, but that's a different story.

ROBERTSON: You can come, go there. You can go to Vegas and watch the show.

HANNITY: I'll go to Vegas with you and watch the show. Maybe I'll go out there for the debut.

Your brother Jase was on the show ripping you to shreds because I smoked you in basketball.

HANNITY: No, no, no, he made some very insightful comments.

ROBERTSON: I'll play you in one on one. I didn't want to get sweaty that day. It was superhot. One-on-one--

HANNITY: What kind of lame excuse is that? A man challenges you and you say you don't want to get sweaty?

ROBERTSON: I didn't want to get sweaty.

HANNITY: You didn't want to get sweaty?

ROBERTSON: I didn't want to get sweaty that day.

ROBERTSON: Appreciate it. Good to see you.