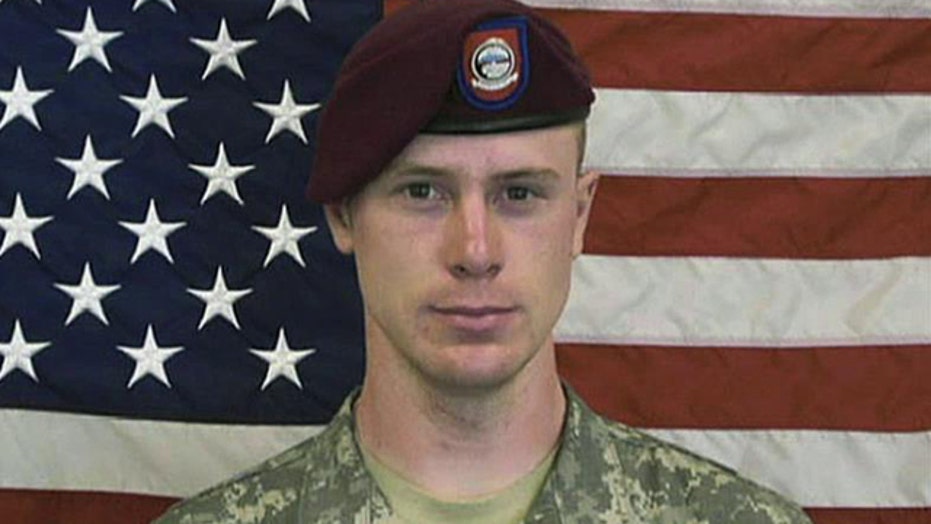 Exclusive: Why is Army delaying release of Bergdahl probe?

This is a rush transcript from "Hannity," October 14, 2014. This copy may not be in its final form and may be updated.

SEAN HANNITY, HOST: Major speculation is brewing regarding the U.S. Army's investigation into Sergeant Bowe Bergdahl's disappearance from his base in Afghanistan in 2009. Now, his desertion led him to be held by the Taliban for five years and eventually resulted in one of the most controversial prison swaps in history in which the Obama administration set five Gitmo detainees free in exchange for his release.

Now, while the investigation into his desertion is complete, the Army has yet to release those findings, raising very serious questions about what important information may in fact be concealed from you, the American people, and why. Could this have anything to do with the upcoming elections?

Here to respond exclusively is Bergdahl's platoon leader, Sergeant Buetow is with us. Also joining us is Fox News strategic analyst Lieutenant Colonel Ralph Peters. Guys, good to see you both. Sergeant Buetow, welcome back.

Why -- you know why he left. You know what happened as do your other platoon mates, is that not true?

SGT. EVAN BUETOW, BERGDAHL'S PLATOON LEADER: That's true. We've come out when he first got released and we explained exactly what happened. He deserted his post all on his own. And we're now still sitting here waiting for answers.

HANNITY: Were you interviewed by the people doing this report?

BUETOW: Yes, I was. I sat down with General Dahl at Fort Lewis in Washington and had a lengthy review with him and kind of a debrief with him.

HANNITY: And at the time, if I recall, you also heard that there were locals on the radio saying that there's an American that's actually looking for the enemy. Did you not hear that?

BUETOW: Yes. Just -- I think it was the day of or the day after he left we did hear over the radio that there was an American looking for someone who spoke English so he could talk to the Taliban. That's something I explained to the general as well.

HANNITY: And pretty much does everybody in your platoon agree with your assessment? Is there anybody that you know that disagreed?

BUETOW: There's not one person who disagrees. I know. I have a list of the people that the general spoke to during this investigation. It's everyone from the platoon, and I know exactly what they said. There's no way that they could conclude this investigation without the truth. They're definitely --

HANNITY: Lieutenant Colonel Peters, this tells me could, this be politically motivated? They know the results, they know what the results are based on interviewing those platoon mates of his. Why is the government not telling the American people the truth?

LT. COL. RALPH PETERS, FOX NEWS STRATEGIC ANALYST: Well, Sean, before I answer that, I have to thank Sergeant Buetow and his comrades for their incredible service not only in Afghanistan but here at home.

PETERS: Those guys did more for their country than I ever did in uniform.

Now, when it comes to why it's being withheld, it's obvious. It's going to be withheld until after the election because no matter which way the report goes, Obama loses. If the White House was able to exert sufficient pressure on the chain of command in the Pentagon to whitewash Bergdahl's actions, then there's going to be this huge outcry from those serving in uniform, from veterans, from conservatives, from you, Sean, you'll stand up, too, and certainly from me.

But if it turns out that the Army, you know, got some backbone and really looked at what Bergdahl did, listened to people like Sergeant Buetow and his platoon mates, and finds that, yes, he should be charged with desertion, then the Rose Garden ceremony looks like an even greater debacle. So Obama has dug himself into a very, very deep hole. And he can't stop digging.

PETERS: You know, when you start with one lie, it leads to another lie and another lie and another lie. But Sean, I want to make thing clear to all the viewers. I have nothing personal against Bergdahl. I never met the guy. This is about a much greater issue than one individual who appears to have deserted from his post and left his comrades behind in wartime.

HANNITY: It's about looking for him.

PETERS: Yes. The principle is this. The Obama administration really despises our military in my view. And they understand why Bergdahl would desert. They just don't understand why anybody would join the military.  And so he fits their Oliver Stone view of warfare. But if there's a whitewash and Bergdahl walks with all his back-pay and stuff, the travesty, the precedent it sets for all future wars is that, hey, dude, it's OK. You don't like what's going on, walk away. We'll cover for you. That's profoundly wrong.

HANNITY: Colonel, we've got to run. Thank you, colonel. And sergeant, I echo Colonel Peters' comments about you and your platoon mates.  Thank you both, appreciate it.