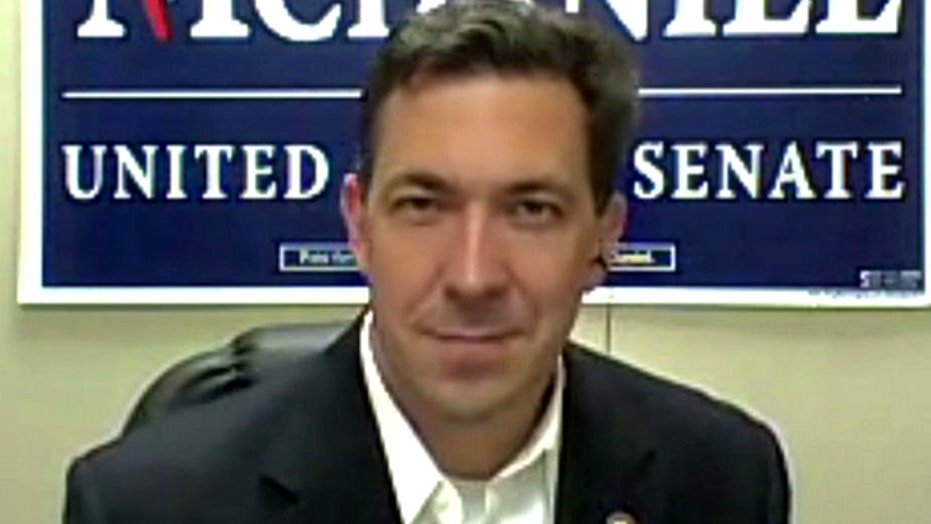 Exclusive: Why Chris McDaniel refuses to concede to Cochran

This is a rush transcript from "Hannity," June 26, 2014. This copy may not be in its final form and may be updated.

SEAN HANNITY, HOST: The GOP fight for Mississippi's U.S. Senate seat is far from over. Now, on Tuesday, six-term incumbent Senator Thad Cochran narrowly won the runoff. But his opponent -- he's refusing to concede, and he joins me now to explain why. Here for his first TV interview since Tuesday's controversial result, U.S. Senate candidate Chris McDaniel.

Chris, Welcome back to the program. Good to see you.

CHRIS MCDANIEL, R-MISS., SENATE CANDIDATE: Thanks, Sean.  Thanks for having me.

MCDANIEL: Well, It was shocking. I'm a two-term state senator. I've been a Republican since I was 13 years old. I've paid my dues. I've gone door to door. I've given money. I considered these men and women to be my friends and colleagues. But desperation in the quest for power pushed them somewhat over the edge. And Tuesday evening, the Republican primary in Mississippi was not decided by Republican voters. It was decided by 35,000 to 40,000 Democrats. And that's unprecedented and extraordinarily unusual.

HANNITY: Well, so 6,000 votes now separate you. There is some issues about whether or not people that voted in the Democratic primary might have crossed over into this runoff, which would have been illegal. Have you calling for a recount?

MCDANIEL: It's no so much a recount. We're looking into the issue of whether or not people who participated in the June the 3rd Democratic primary crossed over into the Republican primary this Tuesday night. And we've already found more than a thousand examples of that in one county alone.

So we're talking about widespread irregularities of ineligible voters that should not have been there in the first place. And they were pushed there.

This is what's shocking, Sean. They were pushed there by an overt action, an aggressive action on the part of Senator Cochran's campaign that was filled with race baiting, lies, distortions. He literally ran the latter three weeks on food stamps. He ran on voter suppression. And he ran on pork.

HANNITY: Let me put up -- let me put up on the screen -- I have two flyers that were being circulated that we've gotten our hands on here.  Now, the first one says the Tea Party intends to prevent blacks from voting. And then they go on to attack the Tea Party. And then there's racial terms that you, Chris McDaniel, Tea Party, voted against the Mississippi Civil Rights Museum, opposed federal funding for public schools, nursing home photo scandal, made racial comments on a radio show.  Then we got another one says Tea Party intends to prevent you from voting, and at the bottom, it says Chris McDaniel in D.C. is a step backward for the state of Mississippi. We've come this far. We can't go back now.

And then there was this robocall. I want you to respond to all three of these things. Listen to this.

UNIDENTIFIED FEMALE: Hello, neighbors. The time has come to make a stand and say no to the Tea Party, no to their obstruction, no to their disrespectful treatment of the first African-American president. Next Tuesday, June 24th, Tea Party candidate Chris McDaniel is in a runoff against Senator Thad Cochran. If we do nothing, Tea Party candidate Chris McDaniel wins and causes more even problems for President Obama.

HANNITY: It goes on longer than that. We're running out of time.  Your reaction to those flyers and that robocall. And are you certain it came from Cochran?

MCDANIEL: Absolutely. And it's absolutely despicable. They did everything in their power to embrace liberal Democrats. Think about that for a second. If we have an agenda as conservatives, it's to fight with principle and to fight with power and to be strong, be courageous. And they say they're going to fight the liberals in Washington, but they embraced the liberals in Mississippi just to win an election. It's the worst style of politicking I can imagine. They did it. They've gotten away with it so far. And that's why we're looking at voter irregulations (ph).

HANNITY: And last question. And you won't support Thad Cochran under any circumstances?

MCDANIEL: That's a great question, Sean. I'm very disappointed right now in his approach. And I'm going to have to pray about it and talk to my family about it. But I never thought they would treat another Republican the way they treated me. I never thought they would go to those measures.  I realize the power is daunting. I realize it's intoxicating. But I didn't think it was worth character assassination of a friend.

HANNITY: All right, Chris, thank you. And appreciate it.