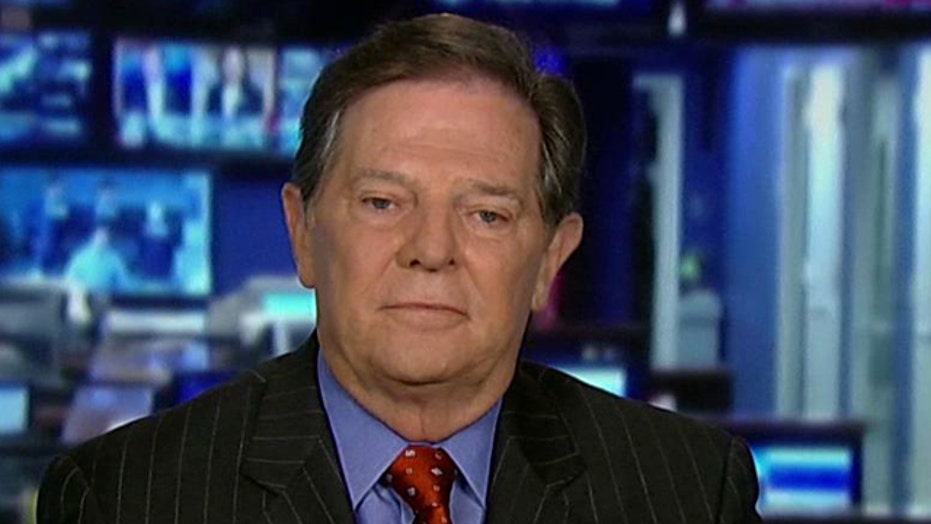 Tom DeLay on court's decision to overturn his conviction

Exclusive interview with the former Congressman

This is a rush transcript from "Hannity," September 19, 2013. This copy may not be in its final form and may be updated.

The former Texas congressman was wrongfully accused of illegally funneling corporate money to Texas candidates in 2002.

Joining me now in an exclusive "Hannity" interview is the man himself, Congressman Tom Delay.

This has gone on for almost a decade longer in your life, about what, 13 years?

TOM DELAY, R-FORMER TEXAS CONGRESSMAN: Well, actually it started back in 1996 when the Democrats announced publicly that they were going to get me. That's when the ethics charges started and racketeering suits, and finally an indictment for a law that doesn't exist in Texas. It's pretty amazing.

HANNITY: Well, first of all, congratulations. I'm sure --

HANNITY: You -- didn't the judge in this case say you never should have been charged? The law didn't apply.? The case was never proven? The charge to the jury was off base, all these things?

DELAY: Yes, you know, that's what happened. There were six grand juries. One of them no billed me. They found a rogue district attorney who found a newly sworn in grand jury on the last day of the statute of limitations. Thirty minutes after they were sworn in, they brought an indictment on me.

HANNITY: So they went grand jury shopping in your case. They had six of them and finally at the last hour --

HANNITY: They finally got the six or seventh one?

DELAY: The sixth one.

DELAY: They appointed a judge that was a Democrat that was defeated in his own primary. He's what they call a visiting judge from San Antonio who slow-walked the -- it took me five years to get into trial. He slow walked it because he knew that five years under this cloud was a punishment unto himself and knew that the longer it took, the easier it was to get me out of office.

TEXAS: Well, I tell you it's what the left does, to be honest with you. If they can't beat you on the political arena then they come and try to defeat you personally and try to completely destroy you, bankrupt you and put you on a grave and then dance on your grave. That's what they do.

HANNITY: If this happened to me, I know a lot of people, considering all the years you have lived under this, I know a lot of people that have been through similar circumstances and it destroys them. How have you maintained? You look the same. You haven't changed. How do you maintain, I guess, your good spirits about you and not let this eat at you?

DELAY: I got to tell you, I told people today, they said, you know, a huge burden lifted off your shoulders. And I tell them I didn't have a burden on my shoulders. I gave my burden to the Lord and he carried it. I didn't have to. Walking with him every day, you could get through it. I don't want to go through it again, but I praised him every day for what I was going through. It just made me a better person, gave me the strength and peace and the joy that I needed to go forward.

HANNITY: Didn't they move your case to the people's republic of Austin?

DELAY: Yes, that's the whole problem. It was unconstitutional, number one, to try me in Austin, Texas, the most liberal part of the state. You couldn't find a jury, any jury pool that didn't know Tom Delay. We showed them 90 percent of them knew me and hated me. Whatever jury showed up they were going to convict me.

HANNITY: I mentioned this to you earlier today. Ray Donovan, how do I get my good name back? This has been out there for so long. I wonder if all these newspapers that covered every aspect of your case and five years later the conviction, I wonder if they will give as much prominent coverage to what happened today and what the judge said as they did before? I tend doubt it.

DELAY: I doubt it, too. I imagine a lot of them in the mainstream media are not feeling good right now. And if they just read the ruling from these wonderful judges that really looked at the law and understood what was going on and expressed it in the ruling itself, they'd know that there are a lot of retractions they need, because the stuff they were saying was straight out of George Soros' book.

HANNITY: Do you any have legal resource after this?

DELAY: You know, the lawyers say I don't unfortunately. In the Texas judicial system, the D.A.s are totally immune from prosecutorial misconduct. We're going to test it. We can't allow this to stand. The abuse of the justice system for political gain is just outrageous. It should not stand.

HANNITY: Well, Congressman, I am sorry about what you went through.

HANNITY: I'm glad in the end justice prevailed. But more importantly, you kept your soul intact. We're going to have you back to talk about the issues in the days ahead. We wish you only the best. Thanks so much for telling your story tonight. Thank you.

DELAY: Well, they didn't slow me down. I'm still working for what's right. That's for sure.

HANNITY: All right, former Congressman Tom Delay. Thank you. I wonder if the New York Times will have it on the front page tomorrow?