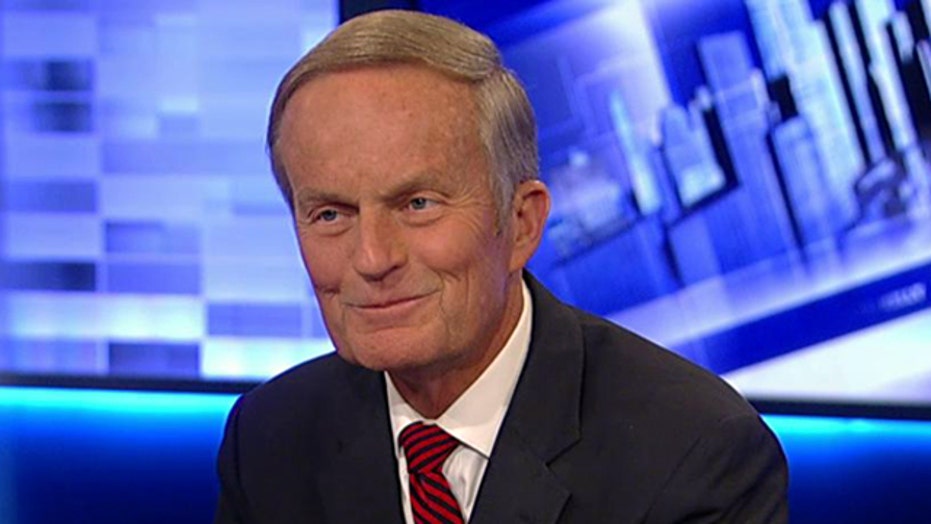 This is a rush transcript from "The Kelly File," July 14, 2014. This copy may not be in its final form and may be updated.

MEGYN KELLY, HOST: Well, in his new book "Firing Back" Todd Akin says, the liberal media blew his comments way out of proportion. By example, he points the lack of reaction to a few classic remarks from Democrats like these.

VICE PRESIDENT JOE BIDEN: In Delaware the largest growth in population is Indian-Americans moving from India. You cannot go to a 7-Eleven or a Dunkin Donuts unless you have a slight Indian accent. I'm not joking.

PRESIDENT BARACK OBAMA: I've now been in 57 states, I think one left to go.

SEN. HARRY REID, D-NEV.: Men, when they're out of work, tend to become abusive.

KELLY: Todd Akin, who represented Missouri in the United States Congress for 12 years, is the author of "Firing Back," joins me now. Congressman, good to see you.

AKIN: It's a pleasure to join you, Megyn.

KELLY: I know that you believe that the liberal media has a double standard that you actually believe is more than that. It is a dishonest standard. How so?

AKIN: Well, if you think about it, let me just try and paint two pictures. One is somebody who had a poor choice of words. May have been a fairly poor choice of words, but still it was words. And then you go two weeks later and there you have at the Democrat convention the keynote speaker, Bill Clinton, and even if you disregard the Broaddrick claims about being raped, has a long history of sexual abuse and indecency. And he's applauded by that convention.

And so I'm thinking to myself, you know, what's worse? Saying a few words or actually having a long history of abusive behavior toward women? I think the Democrat Party is the one that's chairing the war on women.

KELLY: I know you felt there was hypocrisy in the way they treated Rush Limbaugh after his comments about Sandra Fluke versus the way they failed to condemn one of their own, Bill Maher.

AKIN: Yes. And then the other thing, if you kind of look forward, the top Democrat presidential contender, Hillary Clinton. So what's she do? She's getting this guy who's a rapist off the hook that raped a 12-year-old girl. She knows he's completely guilty. And so she tears down the credibility of the 12-year-old kid that's been raped. And then later in an interview she laughs about it.

That's a Democrat war on women. And I believe that it's not just a media bias. It's more than that. I believe that all media owes the truth, some kind of a trust to be truthful to some degree. And I think when that our media doesn't to do that and protects people who are doing wrong, it's overall destructive to our civilization.

KELLY: I should mention that the Clintons -- Bill Clinton denies those allegations of sexual assault and Mrs. Clinton says she was just behaving as a lawyer representing a client and she tried to get out of the case. Let's talk about you.

KELLY: Because it wasn't just the left wing media that went after you. I mean, you look at the conservative pundits in this country.

KELLY: And said you had to go because of your comments.

KELLY: And what you said that was so controversial first of all you said, it was very rare to become pregnant from rape, and then you said if it's a legitimate rape the female body has ways to try and shut the whole thing down.

KELLY: Do you believe that today?

AKIN: Well, look, here's the point. The legitimate rape comment was an abbreviation. It is the idea of a legitimate claim of rape.

KELLY: All right. Let me give that to you.

KELLY: Let's restate it. If it's a legitimate claim of rape, the female body has ways to try and shut the whole thing down. Do you believe that?

AKIN: It was simply, and this is the word I should have added -- again, poor choice of words. The word I should have added is quite simply is that stress plays some part in fertility. Perhaps you know some people they wanted to have a child and they couldn't seem to do it and so they adopt somebody and pretty soon the woman gets pregnant because there wasn't the stress.

So, that was one.

KELLY: No, let me challenge you with that. Because stress reduction can decrease infertility. But that's not the same thing as saying stress will cause a miscarriage. And that's where people took issue with you that you were suggesting the rape victims that if only they would only be more stressed out about it, they would miscarry their baby.

AKIN: No. I was simply saying statistically. And, you know, I'm not setting myself up as a medical doctor or anything. It's just something that had been a long -- and there are a whole series of studies you can, you know, look at different articles on stress and its effect on fertility.

AKIN: And I'm not fighting that point. OK.

KELLY: But we had to carry this over because my team is -- but we're going to have to carry him over, the Congressman Akin. Because the thing that got people so upset was that you seemed to be putting the onus on rape victims saying, if yours was a legitimate rape, if you're actually were raped, then your body will shut down the pregnancy, and if your body doesn't shut down the pregnancy, then you are not the victim.

AKIN: I think you're putting words in my mouth. I didn't say it.

KELLY: I'm saying this is what people heard.

AKIN: I think that's what they heard. And that's why we did the apology because we were responding -- we didn't have enough money to try and redo the whole thing.

KELLY: Yes. I get that. That's why you did the apology. So you seem to be dialing it back now, which we are going to pick up right after the break. Don't go away.

KELLY: And we're back now with former Congressman Todd Akin who represented Missouri in the Congress for 12 years.

So the point I'm trying to get to with you is, did you mean your apology then when you offered it? Or do you mean it in your book when you say you should not have offered it?

AKIN: Well, it was a tactical question, "What are you going to do? Because people have taken your comment to an absurd level. They're saying all kinds of things that you're saying people can't get pregnant if they're raped."

KELLY: And you know that they can?

AKIN: I had people working in my campaign that were the product of rape. They were supporting me.

KELLY: I know but you said it was very rare and in fact it happens to about 32,000 cases a year.

AKIN: I was talking statistical. But here was the point. Nothing I said meant to diminish women. And nothing meant to in any way cheapen or lower the seriousness of the crime of rape. But it's all in "Firing Back."

KELLY: You now acknowledge that a woman who is legitimately the victim of rape does not have a medical way of getting --

KELLY: An emotional way of getting --

AKIN: And I never believed that. That wasn't what I was trying to say. Or I don't think I did say that. OK. But people perceived that and that's why they did the politics.

KELLY: Speak if you can to the divide between the Republican Party? Because you had so many come after you and they were more establishment types.

AKIN: Well, the party bosses have got their own agenda. And to some degree they've made me the example, look, a conservative can't get elected is what they're saying. And the fact is, I was in 24 years as a Reagan conservative all these years, never lost an election. So that's being used now by Karl Rove, people are writing for The Wall Street Journal" saying "everybody knows Akin and conservatives can't get elected to the Senate."

So what are they doing? They're taking precious Republican money and using it to try to select people to be their candidates for the Senate instead of letting the primary process and elections take place.

So instead of an election, which I would argue after 24 years of being in politics is the best way to pick a primary candidate, they're going for selections. And the party bosses have an arrogance to think that they can do that. Now, that's bad for the party for two reasons.

KELLY: They say you were arrogant because you should have done what was best for the party and that was drop out of that race and we wouldn't have Sen. McCaskill now.

AKIN: But here's why it's bad, one, you're wasting money in a primary which you need in the general. And two, you're antagonizing half of the grassroots people in the particular state where you decide you're smarter than the voters are.

KELLY: I do want to tell the viewers that our own Mike Huckabee is a big fan of yours, he wrote the forward to your book, and he does think that you were taken out of context and that the liberal media was a little too quick to dance on your grave.

Sir, good luck for the book.

AKIN: Thank you very much.

KELLY: Thanks for being here.