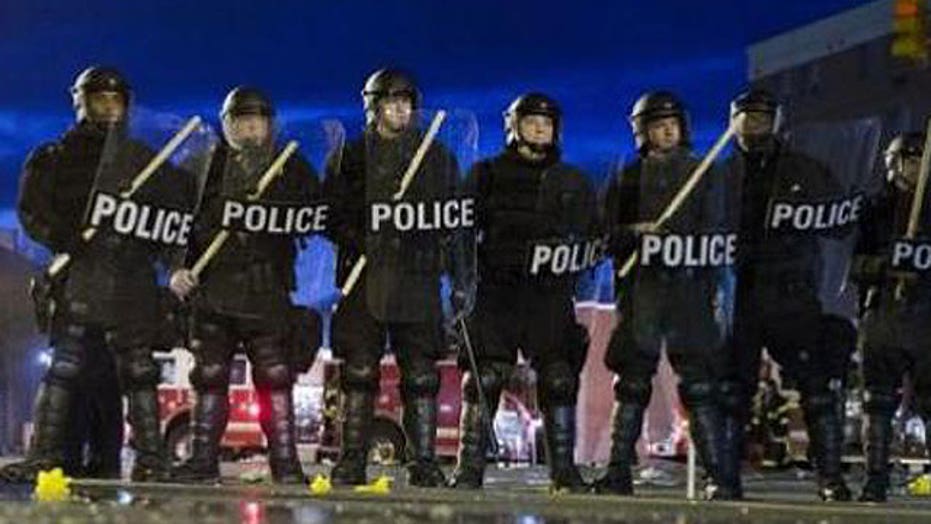 Man believes officers are being thrown under the bus

This is a rush transcript from "The Kelly File," April 30, 2015. This copy may not be in its final form and may be updated.

MEGYN KELLY, HOST: Our next guest is close to two of the arresting officers in this case. He describes them as family men, currently under an intense amount of pressure and says in his opinion, they would never do something like this.

We have agreed to hide his identity and mask his voice to keep him safe. We added quotes at the bottom of the screen to help you understand him as his voice when modulated sounds highly unusual. We know and have verified his real name and occupation and his connection to the officers in question. At his request, we will call him Greg.

Greg, thank you very much for being here tonight. We appreciate it greatly. And so, in the wake of what we saw today, all eyes are now on the van driver, who appears to be the only person who was in the van with Freddie Gray at least prior to picking up another prisoner. You know the driver of that van. Tell us about him.

GREG: He's a genuine, good hearted guy. I've known him for quite some time now. He will give you the shirt off his back. I've seen him give food to citizens. It's a little disheartening that he's been thrown under the bus right now. I just -- someone needs to speak up for him. Because these officers, the two I know, are being thrown under the bus and it's not right.

KELLY: You know, they are talking about a rough ride, that Freddie Gray was put in shackles, he was put in the back of that van. That Baltimore police are allegedly known for giving these rough rides where they drive so erratically that they endanger the prisoners. Knowing this officer, is he capable of it?

GREG: Absolutely not. No.

KELLY: Has he ever had any disciplinary trouble to your knowledge?

GREG: To my knowledge, no.

KELLY: And why do you say -- why are you so sure he couldn't do it?

GREG: Because when you know somebody, you know somebody. When -- he has such a good heart, even with prisoners, he's caring. And I just don't think it's right, the way the media has thrown him under the bus.

GREG: Justice in general. I feel bad for Freddie Gray's family.  They've been through a lot. People have destroyed stores, they're rioted the city in his name, and that's not what the family wanted to begin with.  They just wanted peaceful protests, and you have to respect that. And there are still citizens that love the police. I know you showed a picture of citizens lining in front of the police, against the rioters. So, there's still love in the city. It's going to take a little time for the department to gain the trust back, but I believe they can do it.

GREG: Not intentionally. Police officers don't go in the street and say, you know what, I'm going to arrest somebody and I'm going break some bones. I'm going to hurt them.

KELLY: Do you believe that Freddie Gray would have had some reason to hurt himself? That's the thing that stops a lot of people. You know, his defenders have said, well, he didn't go out there and break his own neck.  Why would he do that?

KELLY: Uh-huh. When you see what's, you know, happened in Baltimore this week, with the police reportedly, according to a couple of police sources who have told us that they were given the order to -- if not stand down, they said stand down, but even not stand down, to hold back, as people were pelting them with bottles and cement blocks and so on. You know, what do you think? Do you think the police are being treated appropriately when it comes to, you know, what's turned out to be an assault against them? We have over 100 cops who have been hurt.

GREG: Yes, I believe the intentions of like the hands off policy, you know, they have a right to protest, you know, I believe the intentions were good. They didn't want to be intimidating to the citizens or to the media, more than they already are. They're police officers, they're not there to, you know, play games. Their lives are on the line. They're there to protect citizens right now that don't really like them. But they're still, they do the job every day. And I believe that they were just a little unprepared with equipment. All they had were riot shields and riot helmets.

KELLY: There's been a lot of talk about that, about how they were not properly armed to handle what came. I know that you're friends with two of the officers involved. There are six in total. Have you spoken with them?  How are they doing?

GREG: Actually, I have not spoken to them.

GREG: I haven't spoken to them at all. I tried to contact a few, and I don't know, they're under a lot of stress. And I don't blame them.

KELLY: Uh-huh. Do you think too often, people forget that these cops, they have families, too, they have lives. And you know, while there are always some bad apples in police departments, like in every company, that we forget --

GREG: Right. Every agency has bad apples, yes. They are human beings, but there are bad apples in every agency. You're going to find them. Every person that gets hired, just because you're a cop doesn't necessarily mean you're a good person. But these two guys, they're good guys.

KELLY: We will continue to follow it. Greg, thank you for speaking to us tonight. And all the best to you.